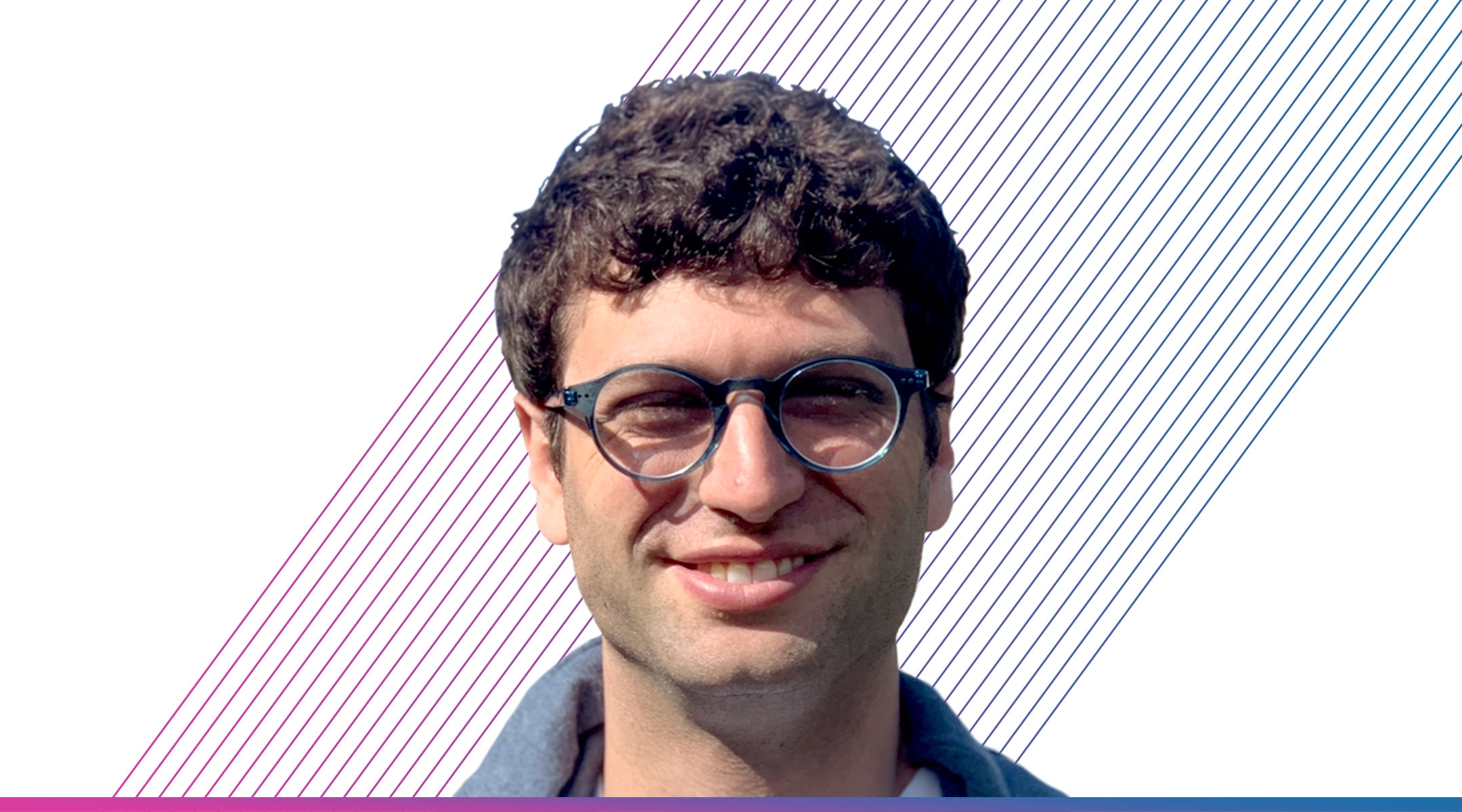 Meet Ari Hoffman, an American journalist and a participant at Z3 2021 Futures Workshop. You may have encountered Hoffman via his opinion column at The Forward, where he writes about politics and culture, or from his Better Thinking newsletter, where he writes on subjects ranging from political hot button issues to dating woes (and sometimes the combination).

Born on Long Island, Hoffman grew up attending Modern Orthodox Jewish day school, before heading to Israel to study at a yeshiva. He returned to the States to study English at Harvard, where he focused on Philip Roth, with a focus on the seminal Jewish American writer’s attitude toward Zionism and Israel in his novels. “This was right around when Jonathan Safran Foer wrote Here I Am; Nicole Krauss had written Forest Dark; Nathan Englander had written a short story called Sister Hills about the settlements,” Hoffman explained over the phone. “It was clear to me that to tell the story of the Jewish American imagination, more and more you had to include Israel.”

Hoffman later approached his interest in American-Israeli relations from the policy perspective, going to law school and working at the State Department under the Trump administration. There, he worked on the legal questions around the administration’s controversial decision to move the US embassy in Israel from Tel Aviv to Jerusalem, focusing on the legal strategy surrounding the move at the International Criminal Court and International Court of Justice. The highly divisive move was celebrated by the right and rebuked by the left and the international community.

Hoffman has now turned his focus to writing, working as a journalist and teaching humanities at NYU. This year, he’s part of the inaugural Hartman Seminar and Writers Workshop for Journalists, a program at the Shalom Hartman Institute, the respected Jewish research and education institute located in Jerusalem. The yearlong program nurtures a politically and ideologically diverse group of journalists as they examine Jewish issues.

Below is a conversation with Hoffman on some of today’s biggest Jewish American and Israeli questions. Hoffman also moderated a lively conversation between Bethamie Horowitz, a Jewish Studies professor at NYU, and Shmuel Rosner, a journalist and the author of Israeli Judaism, where the two discussed unique trends and characteristics of the contemporary Jewish communities of Israel and the United States. You can see that interview here.

What stories about today’s Jewry are you drawn to telling?

I’m really interested in looking at the new things people are building. It’s clear we’re in a very polarized moment. And it’s also clear to me that there isn’t a lot of convincing and persuasion that needs to be done or that can be done. So I’m really interested in what are the exciting new developments – thinking, writing – that are constructive and creative, both in the US and in Israel. I’m interested in what the next chapter of Zionism looks like: what are the questions to which it is the answer, and how will that look going forward?

I just think we live in a very volatile, dynamic world. Post COVID, everything has sort of been jumbled. So I’m more and more interested in questions of technology and where it meets culture. I think a lot of these questions are going to be aggravated or defined by things much bigger and broader than the Jews. I’m interested in how those macro trends land in the Jewish world.

I think the flip side of things being volatile is that there’s a lot of opportunity to define things and reformulate things. When I was growing up there was a sort of complacency in the Jewish world that isn’t there anymore. I think there’s a real opportunity. Even as the landscape is a little more difficult to navigate for people around issues of anti-semitism and anti-Zionism or whatever. In some ways technology is connecting people who otherwise wouldn’t be connected. My hope is that that creates a kind of generational cohort of people who can build things together and strengthen each other. I still have a sneaking suspicion that anything that matters happens in person. I have a sort of Salon series on the Upper East Side, trying to bring people together. I just think there’s not really a replacement for an in person community.

You’ve written that the last surge of Israeli-Palestinian violence “will be remembered as a sea change moment in how the American left perceived the Middle East.” In what ways?

I think there’s no question that a real shift has happened on the left. Pro-Palestinian sympathy is now no longer a sort of incidental feature of the left. It’s a defining feature. The left has developed a very powerful kind of ideology that touches on social issues, cultural issues. And this is the first time we saw the ways in which that worldview now encompasses the Israeli Palestinian conflict in a certain, very powerful way, mostly through applying lenses developed in the US around race to the Israeli Palestinian conflict. And that’s a very powerful story to tell. And I think it’s no surprise that the old Democratic consensus is breaking up a little bit…or is just really old. And so I think it’s really up for debate what attitudes the next generation of Democrats will have towards Israel. I by no means think the fight is over. And I also want to say I think both sides of the political spectrum are in crisis in different ways. But I do think that for most American young Jews who think of themselves on the left, the fight they have to have is the fight within their own tents around attitudes towards Israel. The core organization of the Labour party in England is the worst case scenario, which, today, isn’t inevitable. But if there isn’t village vigilance, then it might be.

How are younger generations of American Jews – on the left and the right – thinking about what it means to support Israel?

One thing I think about is this famous debate between two scholars from the 20th century, Gershom Scholem and Hannah Arendt. Their debate was about this idea of ahavat yisrael, loving the Jewish people. I don’t know what the numbers are, but nowadays a big percentage of young people think that to love something means to criticize it, while the other half believes that to criticize it means you don’t love it! There’s still this fundamental debate about what the call of the moment is. Another way to put it is that the right thinks primarily about the safety of Jewish bodies, and the left worries about the purity of the Jewish soul. And my own thinking is the two go together; you can’t have a soul if you don’t have a body; and if you have a body and no soul, it doesn’t matter. So I think my own interest in the center and my interest in the middle ground is born of that conviction: that the extremes don’t really have the answers.

For many American Jews, learning about the Israeli government’s repressive practices in the occupied territories has caused a major crisis of identity. How do you think Israel’s military occupation in the West Bank is impacting the formation of American Jewish identity?

I think there are two stories that are usually told: one story is that the occupation is the cause of both American Jewish alienation from Israel and the impossibility of peace with the Palestinians, and that they go together. And that’s a convincing story. The other story is that actually these issues are much more tectonic; they’re much deeper. They have to do with the notion of sympathy for a Jewish nation state; they have to do with notions of Jewish power and a discomfort with a Jewish army. And none of those tectonic issues will be solved by whatever happens with the West Bank. I think in a way this is the point at which American Jews and Israelis are the furthest apart. Famously, American Jews who didn’t live through the Second Intifada, and obviously weren’t there for the disengagement from Gaza, have this notion of the occupation. They don’t understand why it’s still happening. And I think for Israelis, they understand all too well why it’s still happening. So I think the interesting thing about American Jews and Israel in this respect is that both Israeli and American Jews might agree actually on the desirability of peace with the Palestinians. But there’s just a kind of sea change between whether they think that’s possible. I think for American Jews, it’s a moral question; for Israeli Jews, it’s a strategic question. And I think the difference between a moral and a strategic question is enormous.