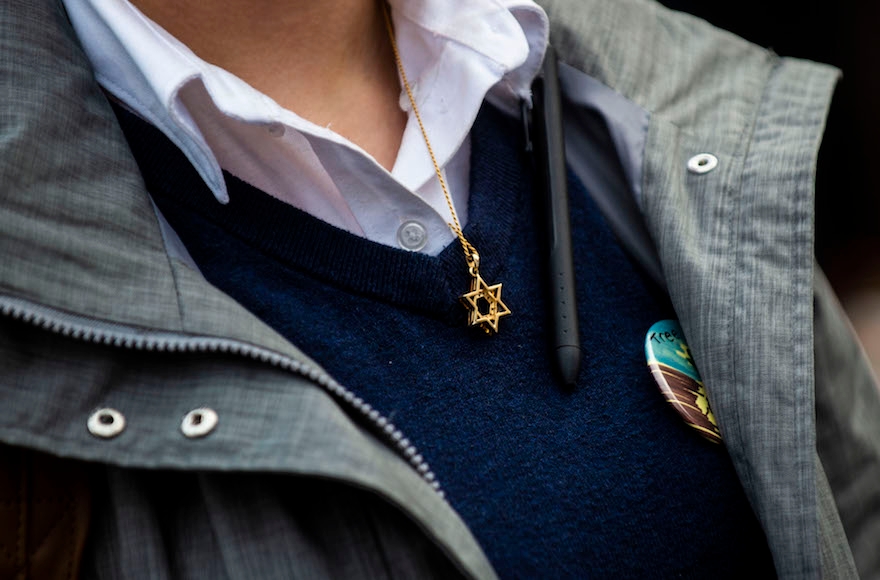 A mourner wearing a Star of David around his neck at the Squirrel Hill memorial service for the victims of the shooting at the neighborhood’s Tree of Life synagogue in Pittsburgh, Penn., Oct. 29, 2018. (Matthew Hatcher/SOPA Images/LightRocket via Getty Images)

(JTA) — My father, whose own father changed his unpronounceable last name to Carroll when he came to America, would often tell a story about job hunting in the late 1940s and 50s. It was only after the interview that the men across the desk would ask, “And all we need now is a recommendation from your clergyman.”

“I knew what you are asking,” Dad would tell them. “And yes I’m Jewish.” He suspects he lost out on a lot of jobs, although somehow he became what he thinks was the first Jewish high school principal on Long Island.

My mother enlisted in the Navy during World War II under the name “Naomi Green.” Why not Greenberg, her maiden name?

Ambiguous last names and tales of casual slights may be the most benign legacies of the institutionalized American anti-Semitism of the last century, but they show how pervasive bigotry was and how insecure Jews felt in this country. Also familiar are stories of college quotas, “restricted” clubs and neighborhoods, beatings at the hands of neighborhood thugs and the broadcasts of demagogues like Father Coughlin, railing against an international Jewish banker conspiracy. Prior to World War II, Jews were blocked from entire industries, and anti-Semitism “manifested itself at every level of society and across the country,” the Princeton historian Julian Zelizer wrote last week.

It’s important to recall that history in the wake of the horror in Pittsburgh, where 11 Jews were gunned down in synagogue by a loner drunk on anti-immigrant and anti-Semitic propaganda. The shooting has inspired a spate of “It can — and did — happen here” essays and reporting, suggesting that Jews are learning that their safety is an illusion, and that the anti-Semitism that had seemed to lie dormant has erupted again, like a chronic disease.

There is a lot of truth to that perception. You don’t need a study to remind you about the toxic sludge that regularly pours forth from the Internet and social media. The “alt-right” puts Jews at the center of their master narrative of white nationalism under threat. The idea of a “Great Replacement” — that people of color are displacing the white race, aided and abetted by Jewish liberals like George Soros — has made the leap from the Charlottesville march to the political mainstream. Despite having Jewish grandchildren, the president often appears loath to separate himself from some of the ghouls who believe this stuff. And whether that’s because he believes it himself or is constitutionally unable to reject the support of a single voter, it doesn’t really matter.

College campuses have seen anti-Israelism shade too often into anti-Judaism. We saw it last week when some pro-Palestinian activists asked Jews in mourning to account for Palestinian suffering.

But it is important to note that despite all these ominous signs, the lived experience of American Jews is not one of fear and vulnerability, certainly when you compare it to 50 and 100 years ago, and even if you don’t. That’s what made the Pittsburgh attack doubly shocking — it is simply not the daily experience of American Jews to feel under physical threat. That is not because they are deluded or complacent. It is because Jews are at home in America, and the vast majority do not experience anti-Semitism as a functional or impeding factor in their lives.

Perhaps the leading indicator of this is the rate at which Jews marry non-Jews — over 70 percent according to recent numbers. That is not only a sign of wide acceptance, but it also means that Jews are woven into the family trees of more and more people of different faiths. You might be inclined to argue that Trump proves how slender a reed that argument is, but even in his case reports suggest that, after Pittsburgh, Jared and Ivanka guided him to do and say the right things. At the very least, Trump finds it important to clarify that he is “the least anti-Semitic person that you’ve ever seen in your entire life.”

In the reporting around Pittsburgh, many have noted the Anti-Defamation League’s report of a 57 percent rise in acts of anti-Semitism in 2017. That comes to 1,986 acts in 2017, compared to 942 in 2015 and 1,267 in 2016. The trend is alarming, and every threat or act of violence is one too many. But that statistic also includes more than 160 bomb threats sent to Jewish community centers and other institutions by a disturbed young Jewish man living in Israel. Those threats were deeply unsettling and sure felt like anti-Semitism, but his acts shouldn’t be included when talking about a trend.

I don’t mean to trivialize the hatred expressed when someone scrawls a swastika, or retweets a vicious anti-Jewish meme, or spews bile at a Jewish journalist. Recent attacks on Orthodox Jewish men in Brooklyn were despicable. The demonization of George Soros is ominous.The Pittsburgh massacre has shattered the illusion that our synagogues are havens from an ugly, dangerous world.

But we shouldn’t grant more power to the hate-mongers than they deserve. The coast-to-coast gestures of solidarity and acts of kindness that followed the Pittsburgh massacre are far more typical of America than the acts of a deranged subculture.  The Pittsburgh massacre is not a sign that Jews have lost their bargain with America, but that hatred by a disgruntled and alienated minority has been encouraged and allowed to fester — by cynical politicians, by feckless social media companies, by apologists who are willing to condone bigotry so long as it is directed at groups they don’t like.

Often when I raise this issue, someone will ask, “But what about Europe?” Jews in many European countries feel under siege, both from a resurgent right and from Islamists. Jews in Belgium and Paris were targets of vicious anti-Semitic terrorism in recent years. European Jews will tell you that if they don’t yet plan to emigrate to Israel, they are keeping a bag packed. Or they’ll say that they don’t dare wear their yarmulkes on the street.

But that’s the point: The United States is not Europe. American Jews don’t live their lives that way. America has not broken its promise, and saying so is a misdirection. If you throw up your hands and say “it’s 1939 all over again,” if  you tell your own story as one of siege and constant threat, you might reach for the very worst remedies. You’ll overlook the advantages, political and cultural, that actually give you the power to fight not just anti-Semitism, but bigotry in all its forms. For example, perhaps what we can offer Jews in Europe is the American example of embracing diversity — and suggest that America has flourished because it encourages the integration of people of different faiths and colors and national origins.

If anti-Semitism is a chronic disease, it is one that we can fight whenever it erupts. But that means looking for the right treatment. Fatalism is not the cure.

How do you define anti-Semitism? It’s complicated.

The post Yes, anti-Semitism is a problem again. No, it is not 1939. appeared first on Jewish Telegraphic Agency.