Yehuda ‘Yudi’ Dukes, Hasidic father of 6, is dead after 10-month battle with COVID 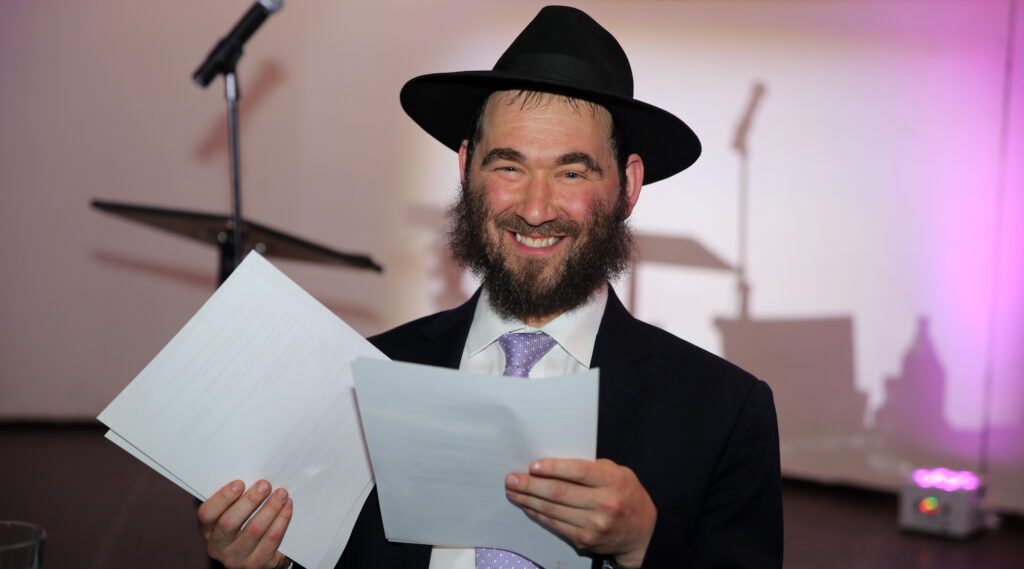 (JTA) — Rabbi Yehuda “Yudi” Dukes, a Hasidic father of six who became sick with COVID-19 in late March and spent nearly 10 months in the hospital as he struggled with the effects of the disease, died Thursday. He was 39.

Dukes’ wife, Sarah, announced his death in a Facebook post Thursday morning hours after she exhorted her many followers on social media to pray for her husband.

Dukes became a symbol of the toll of the pandemic to many in the Chabad Hasidic community and around the world as Sarah documented his condition in Facebook and Instagram posts throughout his hospital stays. People around the world performed mitzvahs — Jewish rituals and good deeds that including saying prayers and learning Torah — in his honor with the hope of contributing to his recovery. A crowdfunding campaign has raised well over $500,000.

The rabbi and his wife, a music therapist, frequently sought spiritual meaning in his struggles with COVID.

“This has not been done to me,” Dukes told the Jewish Telegraphic Agency from the medical intensive care unit at NYU’s Langone hospital last summer. “It’s been done for me.”

Before the pandemic began, Dukes had been healthy and served as the director of the Jewish Learning Network, or JNet, a worldwide Chabad program that pairs people to study Judaism together.

Born and raised in Randolph, New Jersey, Dukes studied in Chabad yeshivas in Brooklyn, Argentina and France, according to Chabad.org. He served as a Chabad emissary in Budapest before returning to the United States to receive rabbinic ordination.

“Wherever he went, he made friends he kept for decades,” said Rabbi Menachem Posner, a friend and colleague of Dukes, according to Chabad.org. “Twenty years later, he was still in touch with people he met in Hungary, Argentina—everywhere he’d been. There were people he called before every Shabbat for decades.”

He became sick with the coronavirus in March as the disease swept through the New York City area, walloping Orthodox communities that held Purim celebrations just before a stay-at-home order was imposed on March 20.

Dukes was admitted to the hospital on March 30 and quickly placed on a ventilator and a machine that oxygenates the blood. Over the course of his long illness, Dukes suffered from a stroke, sepsis, blood clots, brain hemorrhages and collapsed lungs, requiring multiple rounds of tests and antibiotics.

Dukes regained consciousness in the summer after being placed in an induced coma for months and slowly began recovering, mouthing words and eventually eating food again. In August, he was able to breathe on his own again. On Sept. 4, Dukes was wheeled out of the NYU Langone intensive care unit to cheers and singing from the medical staff that had taken care of him for 158 days as he moved to the hospital’s rehabilitation unit.

But the progress was halting and punctuated by setbacks. In October, Dukes was set to be discharged from the hospital but was unable to go home when doctors found a blockage in his liver and gallbladder stones that sent him back to an acute medical unit. Infections and internal bleeding followed and Dukes was placed on a list for a liver transplant.

In a post from Oct. 4, shortly before Yudi Dukes was scheduled to be released from the hospital, Sarah Dukes wrote about her struggle to run a household and raise six children without her husband at home.

“If this is the situation G-d wants me to be in right now, I CAN get through this,” she wrote. She added, “Even if we can’t understand, WE CAN GET THROUGH IT, because our spark of G-d within us gives us unlimited potential.”

On Thanksgiving, Dukes was brought home by ambulance as neighbors sang in the street to celebrate his release. But by the next day, he returned to the hospital.

“Right now, it may be hard to see the end, but I completely trust in the power of our trust,” Sarah wrote Nov. 28, the day after Dukes was re-admitted to the hospital. “G-d will continue giving the doctors clarity to heal Yudi, or G-d, Who ‘Heals all flesh and performs wonders’ will just do it Himself, but either way, Yudi’s redemption WILL come.”

In December, Dukes was intubated again and suffered from heavy internal bleeding. Doctors warned Sarah that her husband was dying.

“Yudi is fighting hard. He has the world fighting with him. We are stronger than nature. Please don’t stop. And please put aside something right now to prepare for the celebration. THIS IS THE TIME FOR THE MIRACLE WE HAVE BEEN CREATING!!!!!” she wrote.

Dukes died hours after the United States recorded a record-high one-day COVID death toll of 4,400. He leaves behind his six children, the oldest of whom, Mendy, celebrated his bar mitzvah in January 2020.