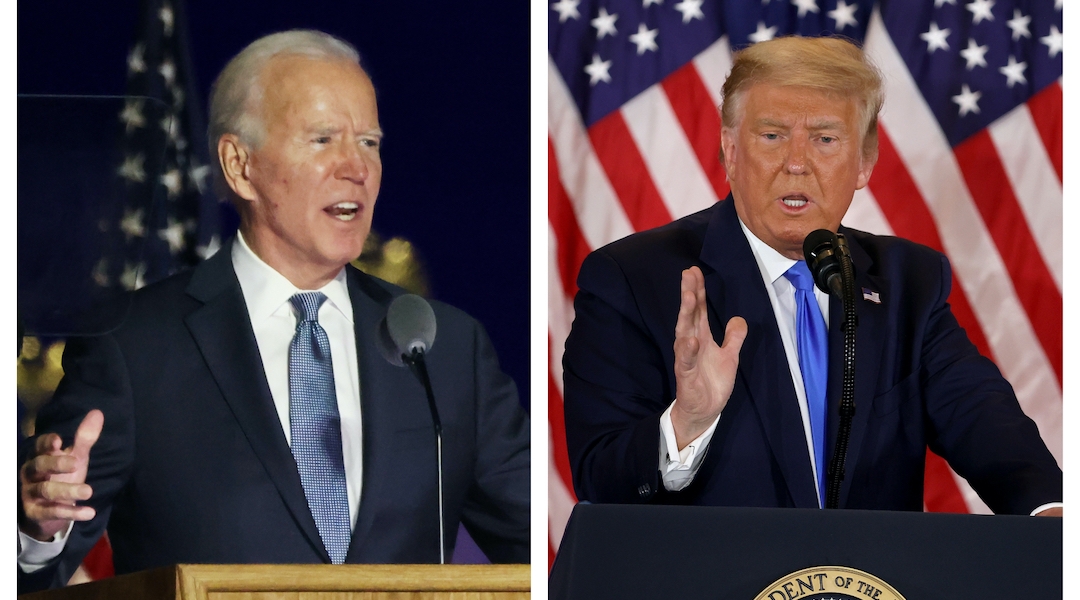 PITTSBURGH (JTA) — American Jews woke up on Wednesday to a presidential election that is extending their anxiety and to electoral maps that show a Republican Party changed by a president they repudiated with their votes.

Joe Biden and Donald Trump were still locked in a battle for the electoral vote majority early Wednesday, one that might last for days as votes are counted — and potentially litigated.

The first exit poll of Jewish voters showed their most resounding rejection of an American president in 20 years. Jewish voters favored Biden 77% to 21% in the poll of 800 Jewish voters commissioned by J Street, the liberal Jewish Middle East policy group, which endorsed Biden. That was a seven-point increase for the Democrat candidate over the same poll’s 2016 finding, twice the margin of error.

Trump’s 2016 victory, the largest-ever popular vote loss for an electoral vote winner — Hillary Clinton bested Trump by 3 million votes — might once have been dismissed as an anomaly, one that would be wiped out by a major loss by Trump in 2020.

It was not an anomaly. Trump has transformed the Republican Party and America. The divide between Trump’s America and American Jewish voters was stark, in numbers and in outlook.

The race could yet go to Biden, who is narrowly ahead in a handful of swing states that would, if the final count favors him, give him enough electoral votes to claim the presidency.

Statements early Wednesday morning from 20 liberal Jewish organizations each appealed to wait out the vote count. Each was suffused with desperation.

“The Jewish people have faced many challenges throughout history, but we have endured,” said Sheila Katz, the CEO of the National Council of Jewish Women. “Though we may need to wait a little longer this year for the final results of the election, we will be patient, we will persevere, we will endure.”

Whatever happens, it’s clear that half of American voters embrace an insular and Christian outlook that most Jews have seen as alien to their understanding of what it is to be an American.

Trump won Florida, a state with one of the country’s largest Jewish populations, by about 400,000 votes, and by a larger margin than when he defeated Hillary Clinton in the state in 2016: 3.5% this year, 1.2% then.

Jews have for years voted disproportionately for Democrats, but the Republican Party they faced in the past was one they recognized as welcoming: President George W. Bush defended Muslim Americans from the blame that some sought to attach to them for the Sept. 11, 2001, attacks; Trump has said they rejoiced and sought to ban Muslim entry into the county.

Trump equivocated multiple times in condemning white supremacist violence (although at times, he condemned it forcefully.) Biden centered his campaign around Trump’s failure to unequivocally condemn the deadly neo-Nazi march in Charlottesville, Virginia, in 2017.

Riding into office on Trump’s heels was Marjorie Taylor Greene, a Georgian who will be the first member of Congress who has expressed belief in the QAnon conspiracy theory, which is rich in anti-Semitism.

Trump’s abrasive rhetoric has tracked with the rise of bigoted violence, and Jewish voters noticed. In Pittsburgh, where two years ago a gunman spurred by the same anti-migrant myths peddled by Trump killed 11 worshippers at a synagogue, the bigotry, Jewish voters said, was a feature, not a bug.

Bigotry is part of the political landscape now, said Matthew Falcone, the vice president of Temple Rodef Shalom, the stately century-old synagogue in Squirrel Hill, the Pittsburgh neighborhood where the shooting took place.

“It’s not just the heated rhetoric,” he said Tuesday after voting for Biden. “It’s the acts of violence.”

The contrasts between the Republican Party Bush led from 2001 to 2009 and the one Trump is leading is stark. Bush cultivated Latino voters, and addressed them in his attempt at Spanish, earning unprecedented support from that community. Trump swore to keep Mexicans out with a wall.

Bush sought to enhance American power in the world, a factor that led to the Iraq war but one appreciated by Jews who believe that American intervention ended the mass murder of European Jews. Trump is retreating from the world, and has abandoned vulnerable allies such as the Kurds.

Trump has fortified his support among the Orthodox and the minority of Republican Jews who appreciate his embrace of the right-wing agenda of Israeli Prime Minister Benjamin Netanyahu, moving the U.S. embassy to Jerusalem, cutting off the Palestinians, brokering normalization deals with some Arab states and leaving the Iran deal.

Trump’s deviations from American norms drove Jewish thinkers who have long sought to hide their political affinities to speak out. Abe Foxman, the former Anti-Defamation League national director who for decades made an art of finding something praiseworthy in every presidential candidate, openly endorsed Biden.