Why would a bomber try to implicate Debbie Wasserman Schultz? 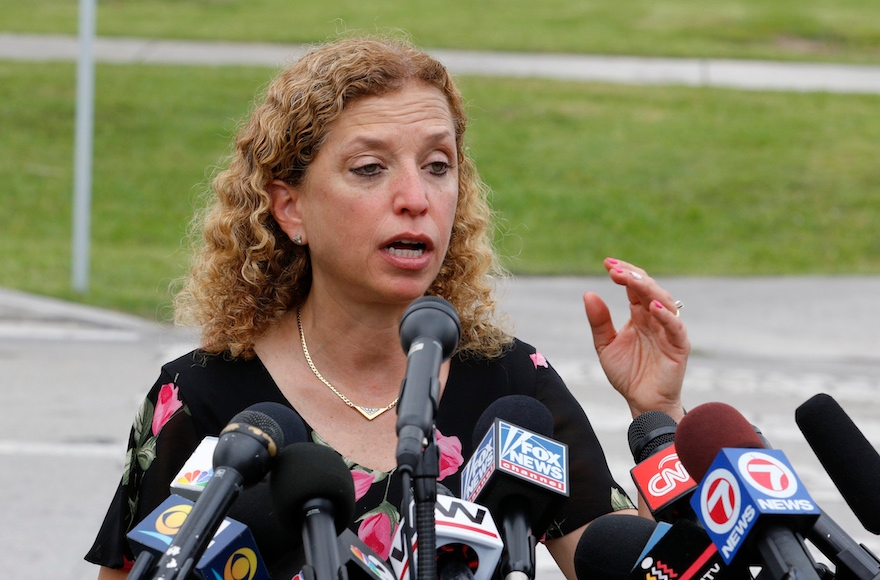 Rep. Debbie Wasserman Schultz speaks after she was denied access to the Homestead Temporary Shelter For Unaccompanied Children in Homestead, Fla., June 19, 2018. A series of high-profile scandals has made her a favorite target for the right. (Joe Skipper/Getty Images)

WASHINGTON (JTA) — An unknown assailant sent bombs to at least four prominent targets this week, each with a notable return address: Debbie Wasserman Schultz, a Jewish congresswoman from South Florida.

None of the devices exploded. The package sent to Holder was wrongly addressed and returned to Wasserman Schultz’s office in Sunshine, Florida, which was evacuated.

The authorities were focused first on keeping people safe in the areas targeted — New York City, suburban Chappaqua, New York, and Washington D.C. — and there were no theories yet as to motive. But Wasserman Schultz, who is serving her seventh term in her Miami-area district, has been a lightning rod in the past for a variety of reasons.

“We will not be intimidated by this attempted act of violence,” Wasserman Schultz said in a statement. “I am deeply disturbed by the way my name was used.”

The lawmaker said she and her staff would “hug each other” and return to work tomorrow.

She led the Democratic National Committee and left under a cloud.

As the chair of the DNC and national face of the party, Wasserman Schultz not only was a target of the right but was accused of bias against Clinton’s primaries challenger, Sen. Bernie Sanders, an Independent who caucuses with the Democrats. Internal DNC emails were posted just prior to the party convention in the summer of the campaign showing that Wasserman Schultz and her aides were unhappy with Sanders, although nothing showed they acted against him. She quit as party chairwoman during the convention, to the delight of the party’s pro-Sanders left. U.S. intelligence agencies believe that Russian intelligence was behind the hacking and leaking of the emails.

Trump’s animus toward Wasserman Schultz was not new. In 2012, long before his presidential run, he seemed to hate her.

“Debbie Wasserman Schultz is hard to watch or listen to — no wonder our country is going to hell!” he tweeted at the time.

On Wednesday, Trump condemned the bombing attempts, although he did not name any of the targets.

“The safety of the American people is my highest and absolute priority,” he said. “We have to unify.”

She defended a Muslim staffer implicated in a phony conspiracy theory.

Wasserman Schultz stood by Imran Awan, a congressional staffer who was falsely accused of stealing government secrets. Awan pleaded guilty to an unrelated charge of making a false statement on a bank loan and, in announcing the plea deal, federal prosecutors went out of their way, unusually, to debunk the conspiracy theories.

Various outlets on the right kept the story alive, and even some of the lawmaker’s allies wondered why she stood by Awan when other congressional offices quickly fired him. Trump embraced the theory that Awan improperly siphoned off government data and stored it off-site, perhaps on behalf of another country.

“Our Justice Department must not let Awan & Debbie Wasserman Schultz off the hook,” he tweeted in June, a month before the Justice Department debunked precisely that theory. “The Democrat I.T. scandal is a key to much of the corruption we see today.”

Despite multiple debunkings, and a partly successful defamation lawsuit, a far right-wing conspiracy theory persists that a DNC staffer, Seth Rich, was murdered because he leaked the DNC emails.

A number of far-right conspiracy theorists, including Trump friend Roger Stone, have insinuated that Wasserman Schultz was involved in the killing. The congresswoman has lashed out at those peddling the theories, decrying the pain they cause Rich’s family. Washington, D.C., police believe Rich was the victim of a robbery gone bad.

The conspiracy theories have at times crept toward the conservative mainstream, pushed by, among others, former House Speaker Newt Gingrich and Fox News Channel host Sean Hannity.

There are 23 Jewish members of the House, but Wasserman Schultz is perhaps the most Jewishly identified. She started her political career as a staffer with the National Jewish Democratic Council. One of her proudest achievements is legislation establishing May as National Jewish Heritage Month, and she convenes the annual congressional Hanukkah party.

Professional anti-Semite David Duke has called her an “anti-white, Jewish supremacist.” White power sites celebrated the downfall of the “subversive Jewess” at the DNC. Soros, another of the bombing targets, has also been assigned an outsize role in the conspiratorial imagination of anti-Semites on the hard right.

The post Why would a bomber try to implicate Debbie Wasserman Schultz? appeared first on Jewish Telegraphic Agency.