Why these Dutch Christians are celebrating Sukkot 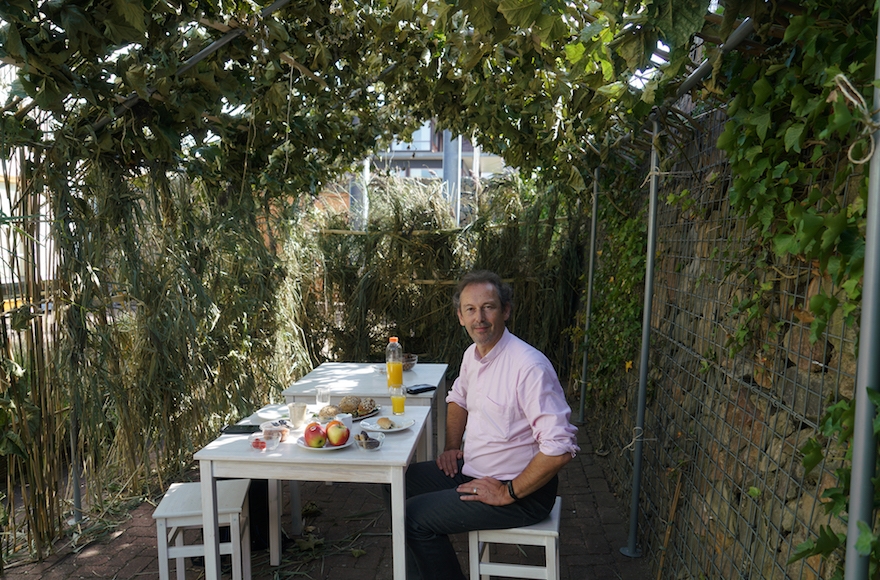 Pastor Piet van Veldhuizen has lunch inside his congregation’s sukkah in the Netherlands, Sept. 18, 2018. (Cnaan Liphshiz)

HENDRIK-IDO-AMBACHT, Netherlands (JTA) — From its exterior, the massive building known as The Ark in this Dutch town looks like a typical Reform synagogue.

On the Hebrew month of Tishrei, the ancient olive tree that dominates the yard of this large worship space is dwarfed by a reed sukkah, a ceremonial hut in which Jews consume their meals for one week each year on the holiday of Sukkot, in commemoration of the Israelites’ state of homelessness after they were freed from slavery in Egypt.

An attraction for The Ark’s young congregants, the sukkah stands opposite the spacious and modern-looking building servicing their community of relatively progressive worshippers.

But The Ark is no synagogue. It’s a popular Protestant church with a giant illuminated cross affixed to the wall behind the pastor’s pulpit.

Located 40 miles south of Amsterdam in Holland’s so-called Bible Belt, The Ark’s congregation of 1,500 members is celebrating Sukkot, which this year begins on Sept. 23, for the second consecutive year. The church has joined a growing number of Protestant churches in Holland where Sukkot, or the Feast of Tabernacles, has been celebrated in recent years by Christians who are drawn to the Jewish holiday’s theological and ecological significance.

“Sukkot, a harvest holiday, is deeply connected to the earth and heavens,” said Piet van Veldhuizen, a longtime camping enthusiast and survivalist who has served as The Ark’s pastor for over a decade. “It has always bewildered me that it had no mark on Christianity because, especially today with rising awareness to the environment, it has so much [spiritual] potential.”

His connection to Sukkot is immediate and intuitive, van Veldhuizen said, because as a pastor, part of his “mission is to emphasize the oneness between man and the environment.”

Van Velhuizen, 58, grew up in a devout Protestant family in Rotterdam, one of many such households in Holland where the Hebrew Bible enjoys equal standing to that of the New Testament.

“Because Sukkot is a part of the Bible, it’s part of my faith, as well,” he said, adding that he would not have adopted a foreign religious custom for his parish from outside Christianity no matter how lovely or appealing.

Whereas some Christians have been celebrating Tabernacles for years all over the world — in the United States and Brazil, evangelical Christians travel in the thousands to Jerusalem on the holiday — it is particularly popular here because of the commanding status of Protestant Christianity in the Netherlands.

Additionally, openness to Jewish traditions is perhaps high in the Netherlands because of the relatively low prevalence of anti-Semitism in Dutch society. In polls by the Anti-Defamation League conducted in 2014 and 2015, Holland came out as the second least anti-Semitic nation in Europe, with only 5 percent of the Dutch population displaying anti-Jewish attitudes in the earlier survey and 11 percent in the later one.

For whatever reason, it appears Dutch Christians began discovering Sukkot only over the past decade or so.

The phenomenon was first featured in the Dutch media in 2015, when the Reformatorisch Dagblad Protestant daily published an article surveying the custom’s growing popularity. Anecdotal information suggests that Sukkot is celebrated by thousands of worshippers in several Christian congregations in Holland today, whereas the custom was unheard of 20 years ago.

One of the pioneer parishes celebrating Sukkot is in a suburb of The Hague called Pijnacker, which began celebrating Sukkot seven years ago. That parish also helped van Veldhuizen set up a sukkah according to halachah, the rabbinic Jewish religious code. Its walls, the frame of a party tent lent by a congregant, are covered in reeds; the roof is fitted with leafy branches that rattle in the brisk autumn winds.

But van Veldhuizen said his congregation is “careful not to celebrate Sukkot as Jews.” That means using the sukkah to break bread once on the first day of the holiday – younger members of the community enjoy a hearty bowl of pumpkin soup between its walls — but not during the rest of what is a weeklong holiday in Judaism.

Van Veldhuizen said he had considered buying a lulav, a closed frond of the date palm tree that is part of four plants — along with etrog and willow and myrtle leaves — used for ceremonial purposes by Jews on Sukkot. “But it would be only to show to the congregants, not to shake,” as Jews do in the Sukkah, he said.

“We wouldn’t use it,” he said. “This is about acknowledging our commonalities with Judaism, not appropriating them.”

Awareness and even celebration of commonalities with Jewish holidays is nothing new among Dutch Christians.

“Christian communities have concentrated on Passover, which became Easter, and Shavuot became Pentecost,” van Veldhuizen told JTA on Tuesday in his church’s sukkah.

Sukkot and the two other Jewish holidays that van Veldhuizen named are the regalim — three major Jewish holidays during which Jews were commanded to perform a pilgrimage to the Temple in Jerusalem.

But Christianity for centuries had ignored Sukkot, which is also known as a Jewish harvest festival.

To van Veldhuizen, this disinterest is connected to a vision within early Christianity of life on Earth as mere preparation for the afterlife.

“There’s not much room for connecting to the soil, to the nature of this world, within that frame of mind,” he said.

But that’s changing amid growing awareness of the environment. Sukkot, with its agricultural roots, emphasizes how humankind uses the environment for its needs.

“The fact that camping became popular in the Netherlands only in the 1960s and 1970s is another factor creating openness for this experience,” van Veldhuizen said.

But some Christians — including conservatives within van Veldhuizen’s own community — and Jews feel uncomfortable with the new Sukkot trend.

In a 2015 column published in the Nederlands Dagblad, Rob van Houwelingen, a prominent Christian theologian, spoke of the phenomenon as inherently misguided.

“Just as I do not circumcise myself or refuse to eat pork, I do not build a sukkah,” he wrote in reacting to reports about the trend of Christians celebrating Sukkot.

Dutch Chief Rabbi Binyomin Jacobs does not show a lot of enthusiasm for the phenomenon, either.

“If a Christian person wants to celebrate Sukkot because they feel it’s part of their faith, fine. I am certainly not going to say anything,” he said. But doing so in some cases can lead to a blurring of the line between Judaism and Christianity, he said, adding “This I cannot accept.”

Jacobs cited the construction each year for the past two decades of a sukkah by Moadim, a Dutch organization for people it calls Messianic Jews and who believe in Jesus. Set up at a camping site in the eastern Netherlands, it is advertised as a traditional Jewish holiday activity. The movement of Messianics, or Jews for Jesus, as they are also sometimes called, is deeply resented by many Jews, who regard it as Christian missionizing of a particularly misleading type. (Van Veldhuizen does not identify with the Messianics.)

“That’s when the line begins to blur,” the rabbi said. “People who believe Jesus is the son of God are not Jews, and when they invite people, mostly other non-Jews, to celebrate Sukkot, then it’s at Judaism’s expense.”

After all, Jacobs concluded, “a Jew is a Jew and Christian is a Christian.”

The post Why these Dutch Christians are celebrating Sukkot appeared first on Jewish Telegraphic Agency.