Why did ‘Three Identical Strangers’ ignore just how Jewish this story was? 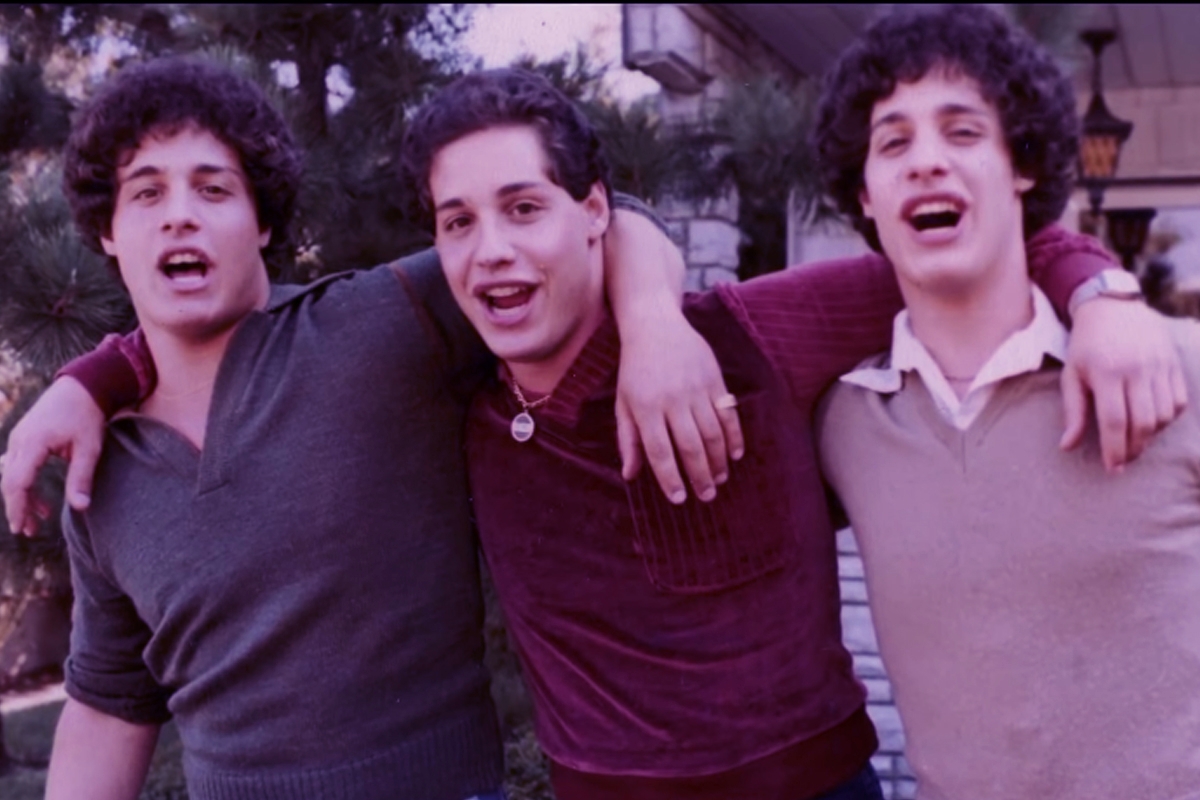 In 2005 a miracle happened in Israel, albeit with a technological assist. Sisters Hana Katz and Klara Bleier were reunited 61 years after being separated in the Budapest ghetto, each having survived the war thinking herself the only one.

Decades later they both deposited testimony with Yad Vashem and, with the help of a new computerized database, realized that they were in fact not alone. As fate would have it, Hana and Klara had both settled in Israel and raised families a mere 45 miles apart.

While most survivor reunion stories are not quite as dramatic as Hana and Klara’s, postwar family reunions are an emblematic Holocaust narrative, weaving together the anguish of loss with the bittersweet shock of reunion.

I couldn’t help but think of their reunion when I watched the hit 2018 documentary “Three Identical Strangers,” now short-listed for an Academy Award in the Documentary category. The film tells the story of triplets separated at birth, raised by three different families, and reunited as young men. “Three Identical Strangers” is absolutely compelling, in part because it carries within it surprising, discomfiting echoes of stories like Klara and Hana’s. I knew enough about the triplets that just putting in the DVD filled me with a sense of dread. What I wasn’t prepared for was the disappointing way the film minimizes the deep Jewishness of the story.

(Spoilers ahead) In 1961, identical triplets were born to a single Jewish mother. The boys were placed in three different adoptive homes; none of the families were told about the existence of the other two brothers. A chance encounter at college in 1980 sparked a family reunion that made national headlines.

Even in the pre-internet age, it wasn’t entirely unlikely the boys would find each other. The adoption agency had placed the boys within a 100-mile radius of each other, in part, one presumes, to facilitate psychiatrist Peter Neubauer’s ongoing study of separated twins and triplets, a study in which the triplets had been placed without their consent.

Among the three fathers, it is David Kellman’s who is portrayed as the most unreservedly ecstatic about the discovery of two new biological brothers. In the words of Richard Kellman, also known as Bubala, “I have two more sons.” Though it’s only mentioned obliquely, we are made to understand that Richard Kellman is a Holocaust survivor, as are other members of the Kellman family. It’s hard not to see Richard Kellman’s joyful embrace of his two new “sons” as another iteration of postwar reunion, another chance to expand his family after decades apart, a point of view that might not be shared by the more American parents of the other boys.

And like those post-Holocaust reunions, this one, too, was haunted by the specter of Nazi cruelties, casting a shadow over what we usually think of as the safe, loving sanctuary of New York’s very Jewish suburbs. Looking back on their placement in the study, triplet Robert Shafran is the one who says what the audience is thinking: “That’s some Nazi shit.” The thought that it was now Jews replaying this trauma on other Jews was what kept me from watching “Three Identical Strangers” until now.

The subjects of Neubauer’s experiment were placed in the adoptive homes by Louise Wise Services, a social services agency founded in 1916 to connect Jewish orphans with new families. Louise Wise (nee Waterman) was educated at the Comstock Finishing School and even attended an Episcopalian Sunday school. Like other wealthy, educated women from highly assimilated, aristocratic German-Jewish families, Louise Waterman dedicated herself to improving the lot of the poor, especially her impoverished Eastern European coreligionists. These kinds of projects, while well meaning, also carried with them the paternalistic (or perhaps maternalistic) condescension of her class.

Unsurprisingly, when Louise Waterman started dating a young Hungarian-American rabbi named Stephen Wise, the Watermans did everything they could to thwart the match. They were unsuccessful, and Stephen and Louise Wise became the first co-equal Jewish power couple of the 20th century. In 1916 Louise revolutionized the care of Jewish orphans by founding the Free Synagogue Child Adoption Committee (later Louise Wise Services). Louise Wise Services would become so powerful that decades later, when the triplets’ families were interviewing law firms to take on a potential lawsuit against them, the law firms turned them away, fearful that a suit against Louise Wise would sour the chances of any associates who wanted to adopt through them.

In one of the most haunting moments in the documentary, the families of the three boys descend on the offices of Louise Wise Services, the former Joseph Hodges Choate Mansion at 10-12 E. 94th St. in Manhattan. They demand information about the placements of the boys and the scientists who had been studying them for years. They get little in the way of answers and leave, dejected. By chance, one of the fathers runs back into the building to retrieve an umbrella. Doing so, he stumbles on the agency heads clinking champagne glasses, as if to toast their good luck at dodging a bullet.

This scene in particular shows how “Three Identical Strangers” is a story about power: the power of social service agencies to create, and destroy, families, as well as the power of the scientific establishment to turn human beings into subjects. One of the urgent questions raised by the movie is what, if anything, will it take to force the powerful to admit fault to the powerless?

That all the players in the triplets’ story — social service agency, scientists, parents, babies, even the newspaper editor who broke the story — were themselves Jewish makes the whole thing even more disturbing. In this story, rather than conflict between Jews and non-Jews, the key distinctions fall along lines of social standing, education and class. Yet the filmmakers seemed reluctant to explore the deep, complicated Jewishness of the story.

Director Tim Wardle says in the commentary track that he’s not Jewish, but his Jewish mother-in-law bought him a Yiddish dictionary to deal with the language he was encountering as he interviewed the families. Hearing that, I’m left to wonder what more we might have learned about the families had the story been told by someone from the inside — someone who spoke the language, as it were, of that time and place.

Sammy’s Roumanian is an iconic Lower East Side restaurant that’s still going strong today, “still loudly, raucously, endlessly, embracingly Jewish, a permanent underground bar mitzvah where Gentiles can act like Jews and Jews can act like themselves.” The triplets had worked together at Sammy’s before opening Triplets. According to an article written at the time, Triplets wasn’t so much a throwback as ahead of the curve on the Jewish roots food movement.

“Syrup pitchers of schmaltz (rendered chicken fat) sit on each table, along with blue siphons of seltzer. The seltzer is essential for the egg creams diners with any appetite left mix up after dessert, using the traditional Fox’s U-Bet chocolate syrup and milk.”

One of the twins, Eddy Galland, is quoted saying, “I can’t tell you how many times people say, ‘I haven’t eaten like this since my mother was alive, or since my grandmother was alive.’”

Knowing what we do about the trauma inflicted on the boys, and the way their real family and history was ripped away from them, their decision to open an Ashkenazi soul food restaurant is all the more poignant, if not heartbreaking. But the audience barely gets a peek inside the boys’ complicated inner lives, especially the Jewish aspect. Instead of benefiting from an outsider’s perspective, the story of “Three Identical Strangers” just feels incomplete, often frustratingly so.

Indeed, Wardle is clear that when it came to the inescapable comparisons to Nazi twin experimentation, “I didn’t want to make it too explicit, I wanted the film to feel universal.” Universality comes at a price. The audience is mostly left on its own to spin out the horrific implications of this very Jewish, ongoing, intergenerational trauma. I have to ask how a director can divorce a story like this one from its particulars and still do justice to its protagonists.

In 2019, when we’re all so sensitive to who is entitled to use and profit from other cultures and stories, how is it still OK to whitewash a story as uniquely Jewish as the triplets?

Rokhl Kafrissen is a playwright and cultural critic. She writes the Rokhl’s Golden City column at Tablet and blogs about Jewish life at Rootless Cosmopolitan.
The views and opinions expressed in this article are those of the author and do not necessarily reflect the views of JTA or its parent company, 70 Faces Media.