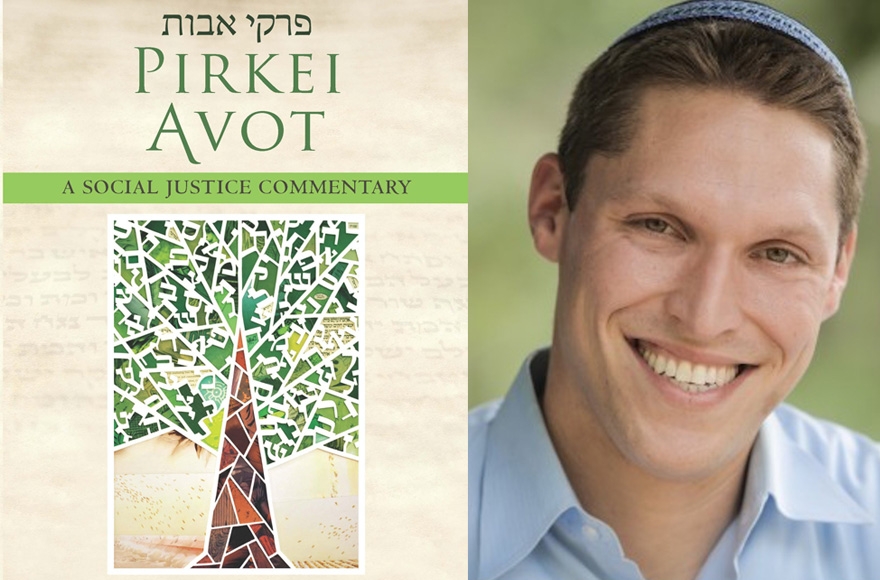 Rabbi Shmuly Yanklowitz is the author of “Pirkei Avot: A Social Justice Commentary.” (Courtesy of Yanklowitz)

LOS ANGELES (JTA) — Are Jews more divided than united? We no doubt have significant differences in practice and opinion – or at least the appearance of major differences. This diversity can drive wedges as much as it can strengthen us.

We can all grow as Jews by striving for the latter, by consciously bringing our differences to the marketplace of ideas to be discussed and understood by others. Now is the time for Jews from all backgrounds and movements to come together to work on the critical issues of ethics and justice in society.

Yet in the world of Jewish publishing, this is easier said than done.

Several years ago, I set out to challenge myself as a writer, as an Orthodox rabbi and as a Jew grappling with big questions facing the world today. The resulting book — a social justice commentary on Jewish values, social justice and ethics called Pirkei Avot (known in English usually as the Ethics of the Fathers) — would be comfortable territory for an Orthodox publisher accustomed to printing the work of Orthodox rabbis.

But this commentary went another direction: Rather than stay the course and go with an Orthodox publisher, as I had for many of my previous works, I submitted the book for publication with CCAR Press, the publishing arm for the Reform movement. “Pirkei Avot: A Social Justice Commentary,” which was officially released a few weeks ago, is the first book from CCAR Press written entirely by an Orthodox author.

Collaboration with a Reform publisher was not without differences of opinion or respectful disagreement. For example, it is Reform practice not to refer to God as Hashem, which is a norm for me. And there are significant differences in how our two denominations approach practices like observing Shabbat and keeping kosher.

During the editing process, the CCAR Press team and I worked closely to ensure that these matters were addressed in ways that both respected our faith traditions and provided a comfortable, accessible language for Jews of all levels of observance. Through collaboration and creativity, neither of us felt we needed to sacrifice any core values. I am proud of the work we did to learn from and even challenge each other in thoughtful, mutually respectful and productive ways.

Though the practices and outward expression of our Judaism may be different, publishing this book together represents our commitment of working together toward Pirkei Avot’s fundamental ethos: The Talmudic sages of old created parables and aphorisms that provide a framework for repairing society from the inside out.

As a Jewish people, this holy work must unite us and not divide us. Living up to the best of ourselves and our communities is a two-way street, for indeed, every self-selected denomination of Judaism ostensibly seeks the same goal: a more just world in which we walk humbly with a just God.

The universality and spiritual innovation of Pirkei Avot encapsulates the breadth and worldly perception of Jewish thought. It is rife with ancient wisdom that couldn’t feel any more relevant to the travails of contemporary society. While Progressive Orthodox Judaism has many merits that I find deeply compelling and inspiring, for decades I have also watched with admiration the commitment of Reform Jewish leaders to universalism and human rights. Indeed, the North American Reform movement has taken the lead in advancing tikkun olam in a way that our other movements can respect and learn from – if we’re given the opportunity.

We can all embrace more epistemic humility in holding our truths more loosely, even while we advocate fiercely for a better world – and break down barriers of mutual understanding and learning, whether as encompassing as denomination or as seemingly trivial as publishing traditions.

Verse 1:12 of Pirkei Avot records the words of our greatest sage, Hillel, who states that our goal should be “loving peace and pursuing peace.” And Verse 4:29 powerfully states that before God, “there is no inequity, no forgetfulness, no favoritism.”

These verses teach us so much about our role in the world: that we can’t seclude ourselves in the actions of our ancestors, but should live out their dreams to make them manifest in the universe.

It is easy to become stuck in the narrow straits of ideological purity and denominational certainty. Too often, we forget that our common and shared mission is to bring healing to others, sure as we are that our Orthodox or Reform preferences are the ideal paradigm of Jewish practice or tradition.

Though each Jewish movement is distinct and idiosyncratic, by and large we share the same goals, the same dreams, the same destiny. Certainly, all of us share the obligation to support the orphan, widow, the downtrodden, the stranger. And we are only stronger when we do it together.

May we, the diverse communities that constitute the vibrant quilt of Judaism, join together as allies to leave as our posterity a world that ought to be suffused with justice, with equality, and with an unbreakable holiness that brings closer together the heavens and earth.