Why a Bible-toting, onion-eating British officer remains a hero in Israel 75 years after his death

HOF HACARMEL, Israel (JTA) — Few non-Jews and even fewer British soldiers are regarded as highly in Israel as Orde Charles Wingate, a senior officer who became a legend here by shaping Israel’s prestate military. Many Israeli towns have a Wingate street or square, and relatives and others who share his name are often reminded of Israel’s debt to him.

“I had recognized him as a man of genius, and I hoped he might become a man of destiny,” British Prime Minister Winston Churchill wrote to Lorna Wingate after her husband’s death aboard an American military plane that crashed in Burma on March 24, 1944. David Ben-Gurion thought Wingate might have become the Israel Defense Forces’ first chief of staff – an extraordinary possibility for a Christian steeped in a religiously inspired Zionism.

Seventy-five years after his death at age 41, Wingate is being honored and remembered throughout Israel at institutions founded in his honor and by those who carry on his legacy.

In this campus named for Wingate atop the Carmel Mountains, seven members of a high-school drama troupe sat in a semi-circle reciting paragraphs about him. It was their first meeting ahead of an April 1 performance in his memory.

“Wingate was the father of the IDF. The IDF today remains Wingatean in terms of its tactics,” said Knesset member Michael Oren, a historian who wrote a screenplay on Wingate that Hollywood optioned but hasn’t produced. 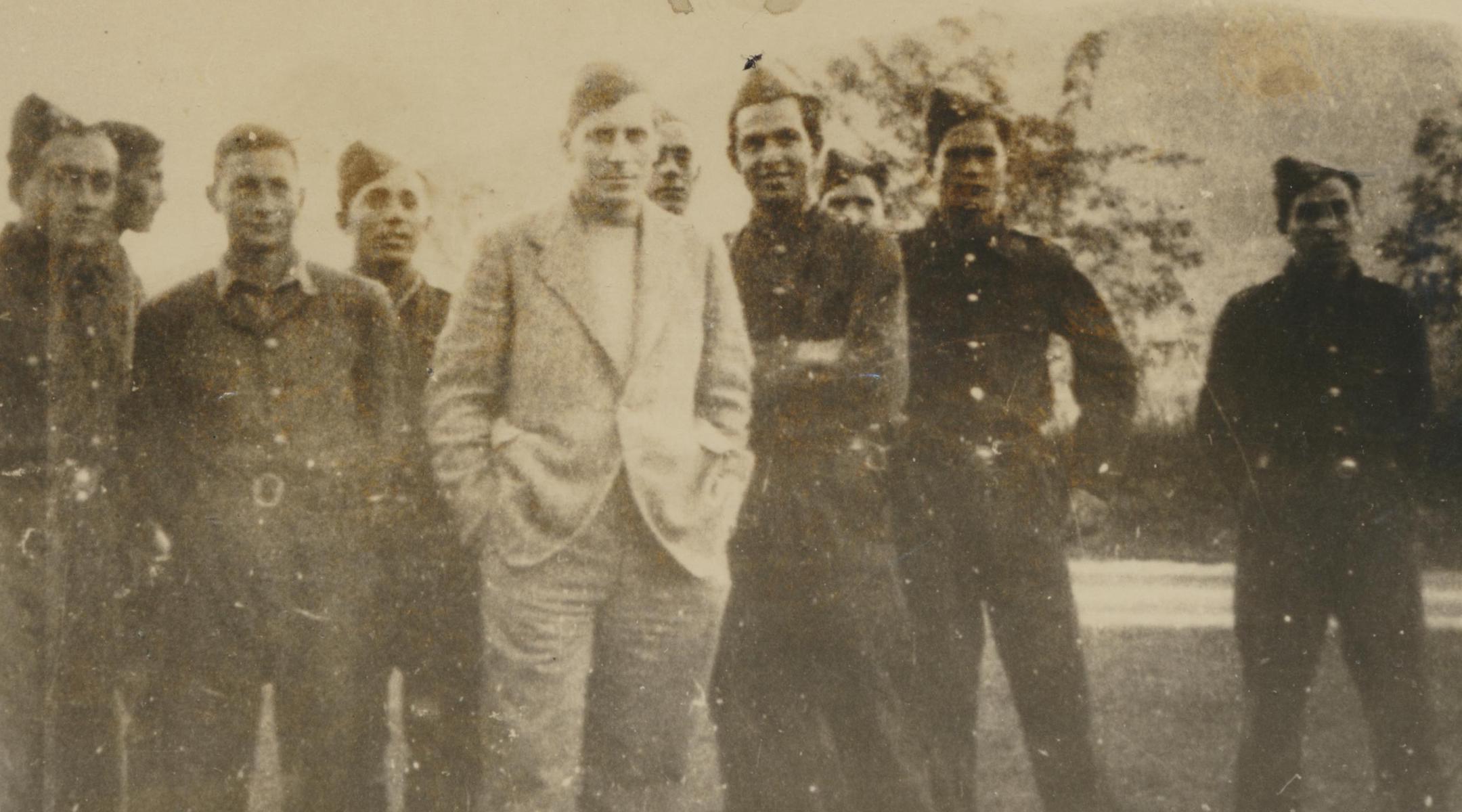 A son of missionaries, Wingate carried a Bible wherever he went in prestate Israel and trumpeted Jewish claims to the land just as British Mandatory policy turned anti-Zionist.

He arrived in Sept. 1936 charged with ending the Arabs’ sabotage of an oil pipeline running from Iraq to Haifa through the Jezreel Valley, then trained that region’s Jewish fighters to repel attacks during the Arab Revolt, the nationalist uprising by Palestinian Arabs against the British Mandate.

Wingate, a captain, formed the Special Night Squads in which British infantry soldiers and Jewish paramilitary retaliated, often ruthlessly, against Arab insurgents. (Palestinians and some Israeli historians take a dimmer view of Wingate’s exploits, accusing him of sadism and targeting civilians as well as combatants.)

Wingate drilled his men in an ethos of utilizing offense over defense.

“The concept was new to us,” Moshe Dayan wrote in his autobiography of his first meeting Wingate, when the visitor led a nighttime ambush. “Arab attackers had been forced to realize that no longer would they find any path secure for them.”

Wingate taught himself Hebrew. He had an eccentric side, too. Dayan wrote of Wingate regularly holding meetings in the nude while eating a raw onion, which he would sometimes wear around his neck on a string. His troops often were subjected to long religious sermons.

After learning of Wingate’s influence, Ella Brahanu, a Yemin Orde 10th-grader said, “Now I understand and appreciate this place.”

Forty-five miles southeast and several hours later, two soldiers visited Beit Shturman, a museum at the kibbutz that served as Wingate’s base during the Arab Revolt. Down the path from the museum is a building with a picture of Wingate marking his headquarters.

The duo had come to arrange the visit of hundreds of recruits from Israel’s elite Golani Brigade for a full-day seminar on Wingate. 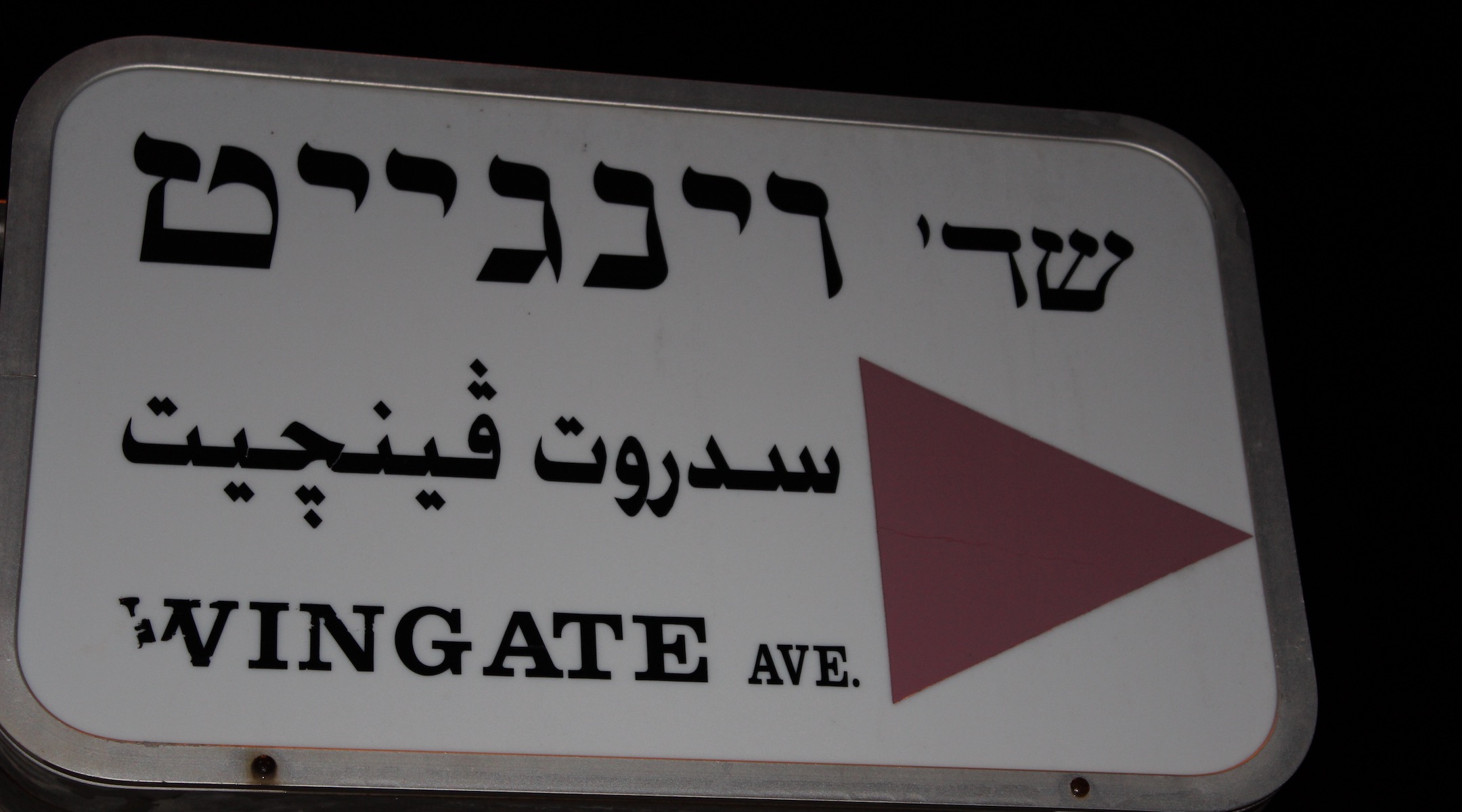 Street signs honoring Orde Wingate, like this one in Haifa, are common throughout Israel. (Hillel Kuttler)

They stood in a lower-level room devoted to the British officer, who had risen to major-general at his death. A case displayed Wingate’s Bible, which Lorna dropped from a hovering airplane to residents of a besieged moshav, Ramot Naftali, during Israel’s War of Independence. One wall told of the Special Night Squads. Another featured verses from Chapter 7 of the Book of Judges, whose central figure, Gideon, was Wingate’s hero.

Last July, Rick Summers ate lunch at a picnic table with players from the Wales national team competing here in the World Lacrosse Championship. Summers was their assistant coach.

Playing for England’s squad heading to Baltimore for the 1982 world championship, Summers had submitted personal documentation to staff. Word leaked of his given name: Orde.

Summers’ father, Harry, an observant Jew who served in Britain’s military during World War II, admired Wingate for leading Jews, Ethiopians and Burmese toward independence. Wingate commanded Ethiopians against Italy’s occupation — characteristically he called his unit the Gideon Force — and organized Indian and British forces he dubbed the Chindits against Japanese invaders in Burma.

“My father recognized that this was a guy who stood up for what he believed and had principles,” said Summers, a 62-year-old engineer from Manchester, England. 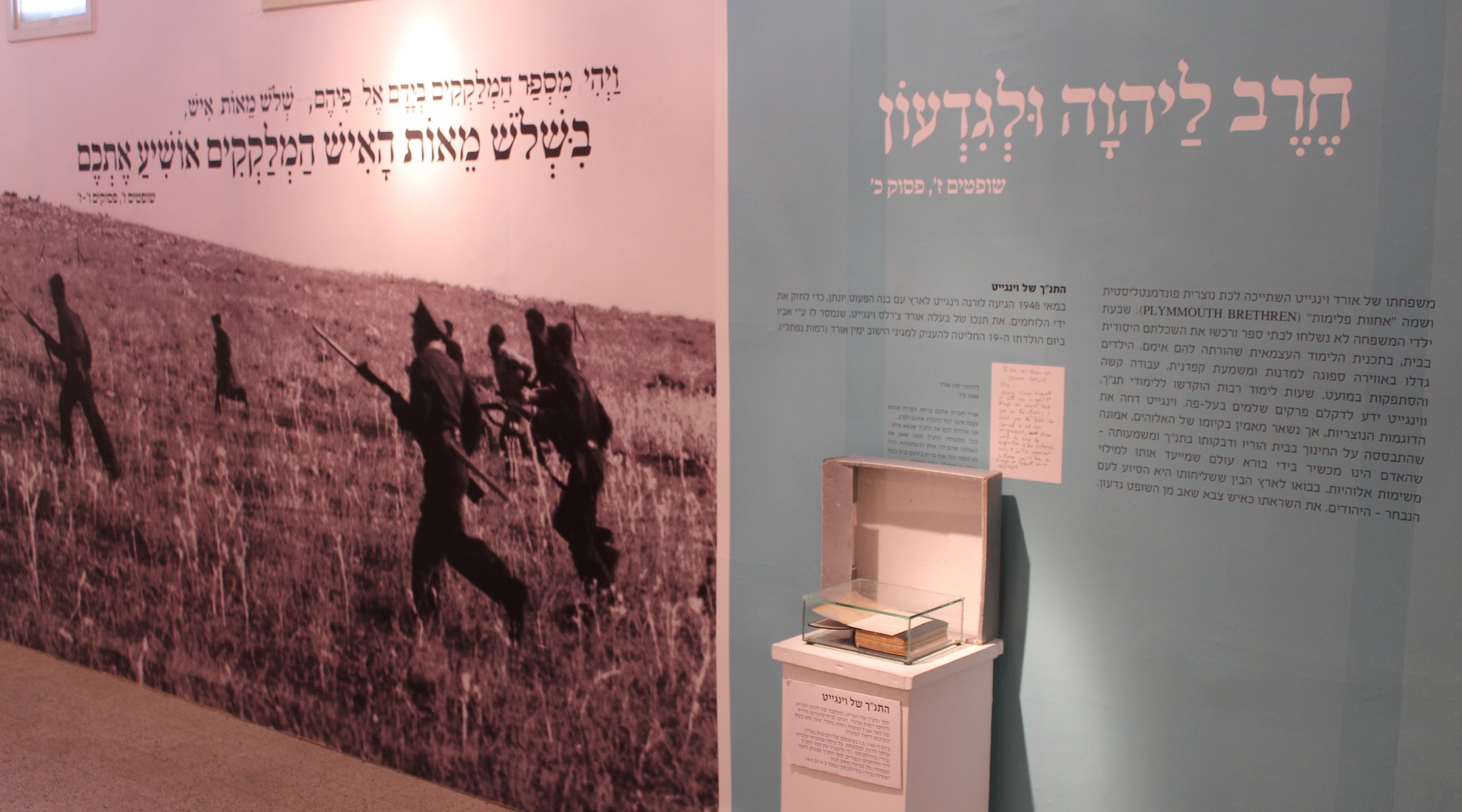 This athletic-training complex where Summers sat memorializes his namesake, who, said Effy Yaacobi, the Wingate Institute’s former director of external relations, “was an absolute meshuga on physical fitness.”

Abutting the institute is an army base, Machane Hayedid. Wingate was known as “hayedid,” the friend – so much so that his superiors evicted him from the country.

Another of Wingate’s namesakes lives in suburban Washington, D.C. Orde Kittrie expressed surprise at an email introduction to Summers he received last summer.

“This is the very first time I have had the pleasure of meeting someone else named Orde,” Kittrie responded.

Kittrie, 54, a senior fellow at the Foundation for Defense of Democracies, consults for the Pentagon, where American officers sometimes ask, “Are you named after … ?” Next to the Pentagon is where Kittrie’s father, Nicholas, a Tel Aviv native, took him – “from as young as I can remember,” Kittrie said – to annual Wingate ceremonies at Arlington National Cemetery. Wingate is buried there in a common grave with the other victims of the plane crash.

When Ireland’s parliament considered legislation last year to criminalize the purchase of goods and services from Israeli settlements, Kittrie, a lawyer, warned Irish corporate and political leaders about how U.S. anti-boycott laws would impact subsidiaries of American companies.

Wingate “serves as an inspiration to me,” Kittrie said. “His hallmark was using unconventional military tactics. I, similarly, try to use creative tactics … to achieve national security and foreign policy objectives.”

Orde Wingate died seven weeks before his only child, Orde Jonathan Wingate, was born. Like his father, grandfather and relatives (T.E. Lawrence, known as Lawrence of Arabia, was a distant cousin of his father), Orde Jonathan served in the British military.

His seventh cousin, Duncan Orde, has lived in Israel since 2004. Orde, 60, is related through Ethel Orde-Browne, Wingate’s mother. At a coffee shop, he showed a journalist his family tree. Orde Wingate’s appearance on it helped Duncan attain Israeli residency visas for himself, his wife and their three children, all Christians. So did letters on Orde’s behalf from several of Wingate’s Special Night Squads soldiers. 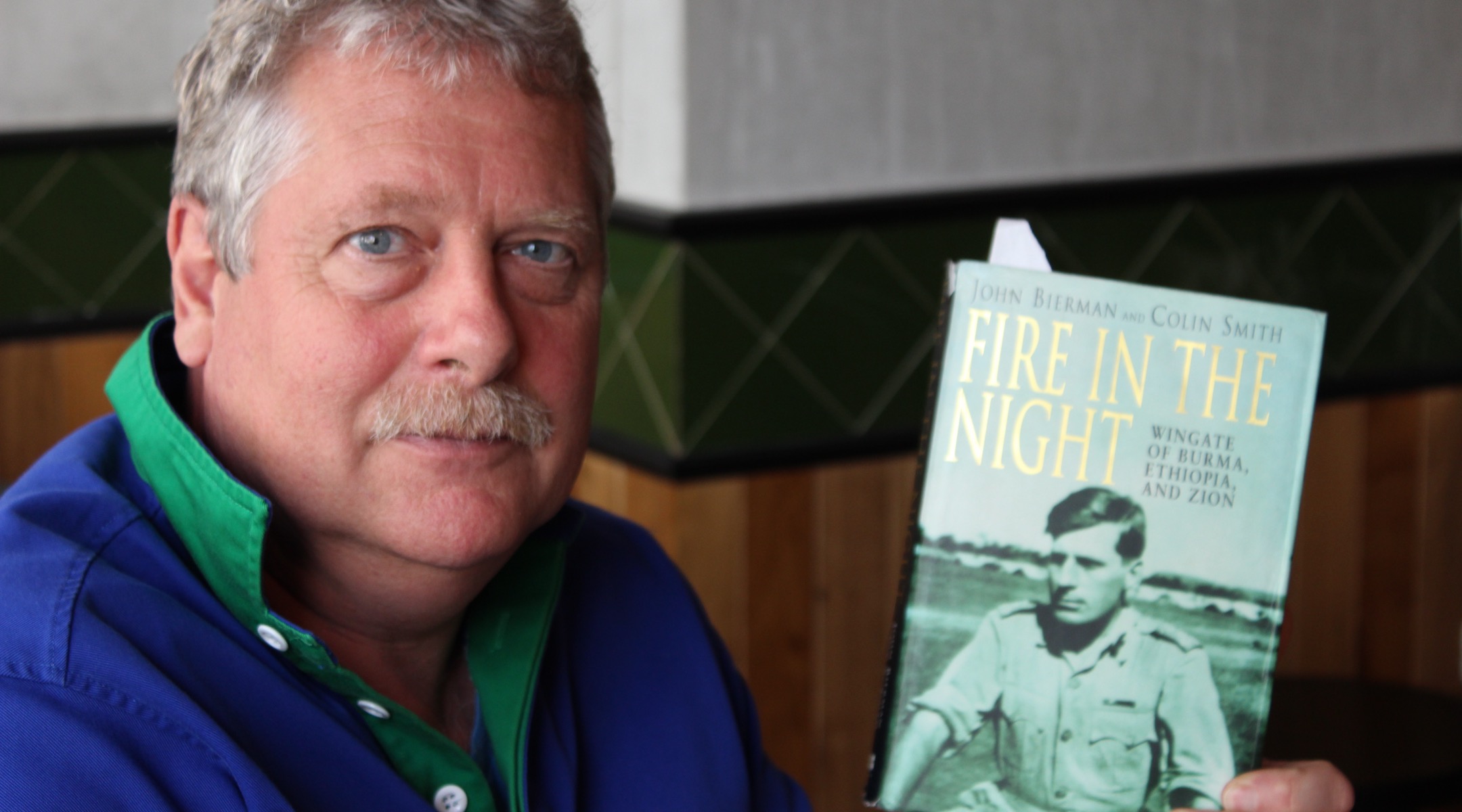 “The mere fact that former SNS members are so respected in Israel obviously carried weight,” Yaacobi said. “It produced results.”

Orde said he feels “a spiritual connection” to Wingate through their common devotion to Zionism.

“He believed that this is your homeland, and he did something about it. He didn’t just talk about it,” Orde said.

Orde’s sons, John-Joseph and Ben, acted, too. They served in the IDF and live with their sister in Jerusalem.

John-Joseph’s commanders had learned about Wingate in officers’ training course, and asked about his surname. John-Joseph confirmed his relationship to Wingate.

“They have a lot of respect for Wingate and what he did,” John-Joseph, 24, said. “It’s nice to be in the same family.”