Who’s sorry now: The top 10 apologies of the Jewish year 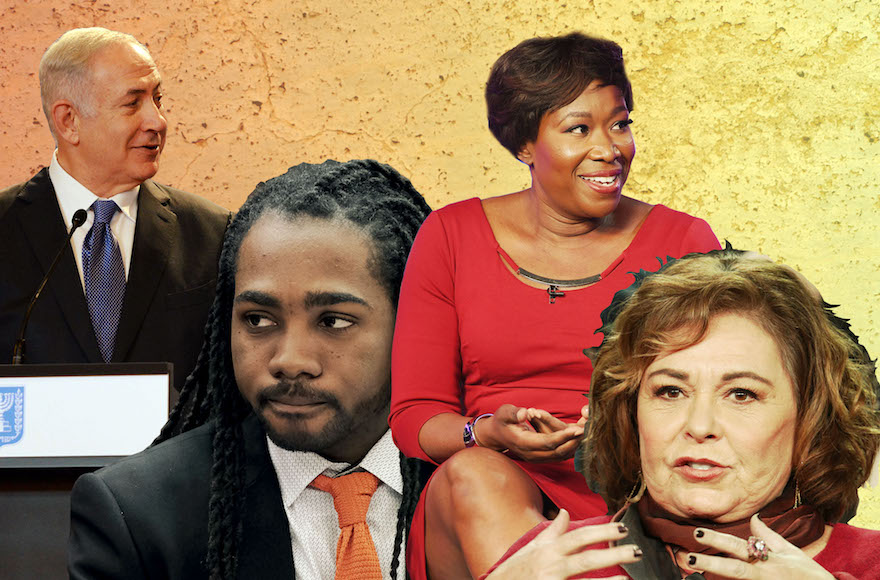 (JTA) — Rosh Hashanah, the Jewish New Year, begins an intense 10-day period of introspection and repentance that culminates with Yom Kippur, which begins this year on Tuesday evening, Sept. 18.

As in years past, we’ve compiled  a list of the most newsworthy apologies of the past 12 months. Whether or not you find these apologies satisfying, sincere or even justified, they represent a range of key themes that dominated the news in the Jewish year 5778.

Larry Kudlow, Trump’s economic adviser, apologized for inviting a friend who publishes work by white nationalists to a party in his home. Larry Kudlow said that he was unaware of the views of Peter Brimelow, publisher of the anti-immigration website VDare, when he invited him, telling The Washington Post that if he had “known this, we would never have invited him. I’m disappointed and saddened to hear about it.”

Israeli Prime Minister Benjamin Netanyahu said it was an an “administrative mistake” after left-wing U.S. journalist Peter Beinart was detained at Ben Gurion Airport and questioned about his political activism. Beinart called it a “half-apology.”

Trayon White Sr., a Washington, D.C., city council member, sat down with other lawmakers and local Jewish leaders at a breakfast in March after accusing “the Rothschilds” of controlling the weather, the World Bank and the federal government. Jewish community members said White was sincere in his apology but he was later criticized for leaving a scheduled tour of the U.S. Holocaust Museum early.

Jason Spencer, a Georgia state representative, resigned after he was duped into dropping his pants and used a racial slur on Sacha Baron Cohen’s new Showtime series. The Republican later apologized for “this ridiculously ugly episode.” Cohen roped in Spencer and a few current and recent politicians while pretending to be Col. Erran Morad, a purported Israeli terrorism expert.

Roseanne Barr apologized to Hungarian-American billionaire George Soros for calling the Jewish philanthropist a Nazi collaborator. The comedian’s Soros tweet came at the same time as her racist one mocking former Obama official Valerie Jarrett, which led to the cancellation of the reboot of Barr’s popular ABC sitcom. In an onstage appearance with Rabbi Shmuley Boteach, Barr sounded less than remorseful about her Jarrett tweet.

“You apologized to her because you recognized that you had wronged her?” Boteach asked Barr.

“Well, I recognized that she thinks I wronged her,” Barr replied. “I’m sorry that anyone thought that was a racist and not a political tweet.”

“I recognize that there is a pattern here,” he said in a statement to The New York Jewish Week. “It’s one that speaks to my inappropriate behavior for which I take full responsibility. I am deeply apologetic to the women whom I have hurt by my words or my actions.”

MSNBC host Joy Reid apologized for blog posts criticizing the late Israeli Prime Minister Ariel Sharon and questioning Israel’s right to its sovereignty. Reid wrote that she had published items in her since-discontinued blog that “I deeply regret and am embarrassed by.”

Samantha Bee, after calling Ivanka Trump a “feckless c***” on her TBS late night show “Full Frontal,” apologized both to the president’s daughter and her audience.

“A lot of people were offended and angry that I used an epithet to describe the president’s daughter last week,” Bee said during the opening monologue of her show. “It is a word I have used on the show many times trying to reclaim it. This time I used it as an insult. I crossed the line. I regret it and I do apologize for that.”

Michele Bachmann, the former congresswoman from Minnesota who ran for the Republican presidential nomination in 2012, apologized in Israel for calling on Jews to convert to Christianity. In 2015 she said that Christians need “to be faithful in the Kingdom and to help bring in as many as we can, even among the Jews — share Jesus Christ with everyone that we possibly can because, again, He’s coming soon.” At a joint Jewish-Christian Bible study at the Knesset in May of this year,  she asked for “repentance from the Jewish people for the horrible and arrogant way Christians — myself included — treated and regarded the Jewish people.”

Quai James of Yonkers, New York, said he was “truly sorry” for posting a video on social media ridiculing the hairstyle of a young Hasidic boy.

“It’s my fault that I didn’t think about this while I was doing, before I even did, it. I should have been more considerate and more open to other people…. That right there was a form of bullying. I cannot take that back.” The 25-year-old later volunteered at Masbia, a Jewish soup kitchen.