(JTA) — After one massive wedding that was scaled back under pressure and another that went off in secret, one of the most important leaders of the Satmar Hasidic community delivered a speech that amounted to a declaration of war.

“We endured three difficult weeks. Indeed, the school administrators — not only here but also in other places — very nearly capitulated, because it is exceedingly difficult to do battle with the government. It takes enormous amounts of energy,” Rabbi Aaron Teitelbaum, leader of a Satmar faction based in Kiryas Joel, New York, said in the speech, which was printed on flyers posted in Brooklyn’s Borough Park earlier this month.

This week, the New York Post reported about a Satmar wedding — of one of Teitelbaum’s grandsons — that was organized and held in secret earlier this month in Williamsburg, Brooklyn, with thousands in attendance. New York Gov. Andrew Cuomo called the plans “totally deceitful” and New York City Mayor Bill de Blasio said the synagogue that hosted the wedding would be fined $15,000. (De Blasio told the Post on Tuesday that New York was a “big city” in explaining why the city didn’t catch on to the wedding.)

As they were making their comments, last-minute planning was unfolding for another wedding, this time in Kiryas Joel. Reporters for The Daily Beast observed people coming in and out of the wedding hall on Monday night, with workers bringing in pallets of bottled water. The Post reported Tuesday that the state police were investigating the wedding.

Even with all the attention they have drawn over the past several days, the weddings are not an anomaly in the Hasidic community despite being in clear violation of the state’s rules against large gatherings during the pandemic. Weddings have been happening in Brooklyn for months — with precautions such as covering windows with paper and guards at the doors in case an inspector shows up to keep them from being detected.

Members of the Hasidic community say the weddings aren’t likely to stop, in part because cases are not translating into the large number of hospitalizations and deaths seen in the spring. Also the push to stop them is coming from outsiders.

“I don’t think the government can do much, to be honest,” said Meyer Labin, a Hasidic writer who grew up in the Williamsburg Satmar community.

Some critics say the lack of secular education in the Hasidic community is to blame.

In fact, Rabbi Teitelbaum himself linked the defiance of COVID rules with the ongoing fight against government attempts to increase secular education in yeshivas in his speech, which was given at a post-wedding celebration following the secret Williamsburg wedding earlier this month.

“They want to change the education of our sons and daughters, God forbid,” the Satmar leader said, adding that “we will not capitulate and we will not change! We are not going to change.

“We will say it again and again: Klal Yisroel will take no orders, or anything of the sort, whatever form it might take, whatever will come,” he said, insisting that the Satmar education system would remain the same, with minimal secular education.

Naftuli Moster, executive director of Yaffed, an organization advocating for secular education in yeshivas, called the speech evidence that leaders of the community “believe they are above the law.”

“When someone tells you who they are, believe them. If there was ever any doubt as to how the Hasidic leaders feel about government regulations, here is the proof,” Moster said.

Hasidic life has never been conducive to staying home. For the large families common in Hasidic communities, keeping children home from school is not practical in cramped New York City apartments, particularly without tablets and computers to keep them occupied. Much of the life is in communal spaces like schools and synagogues, making social distancing all but impossible. And the increasing influence of pro-Trump media has seeded skepticism of the coronavirus. 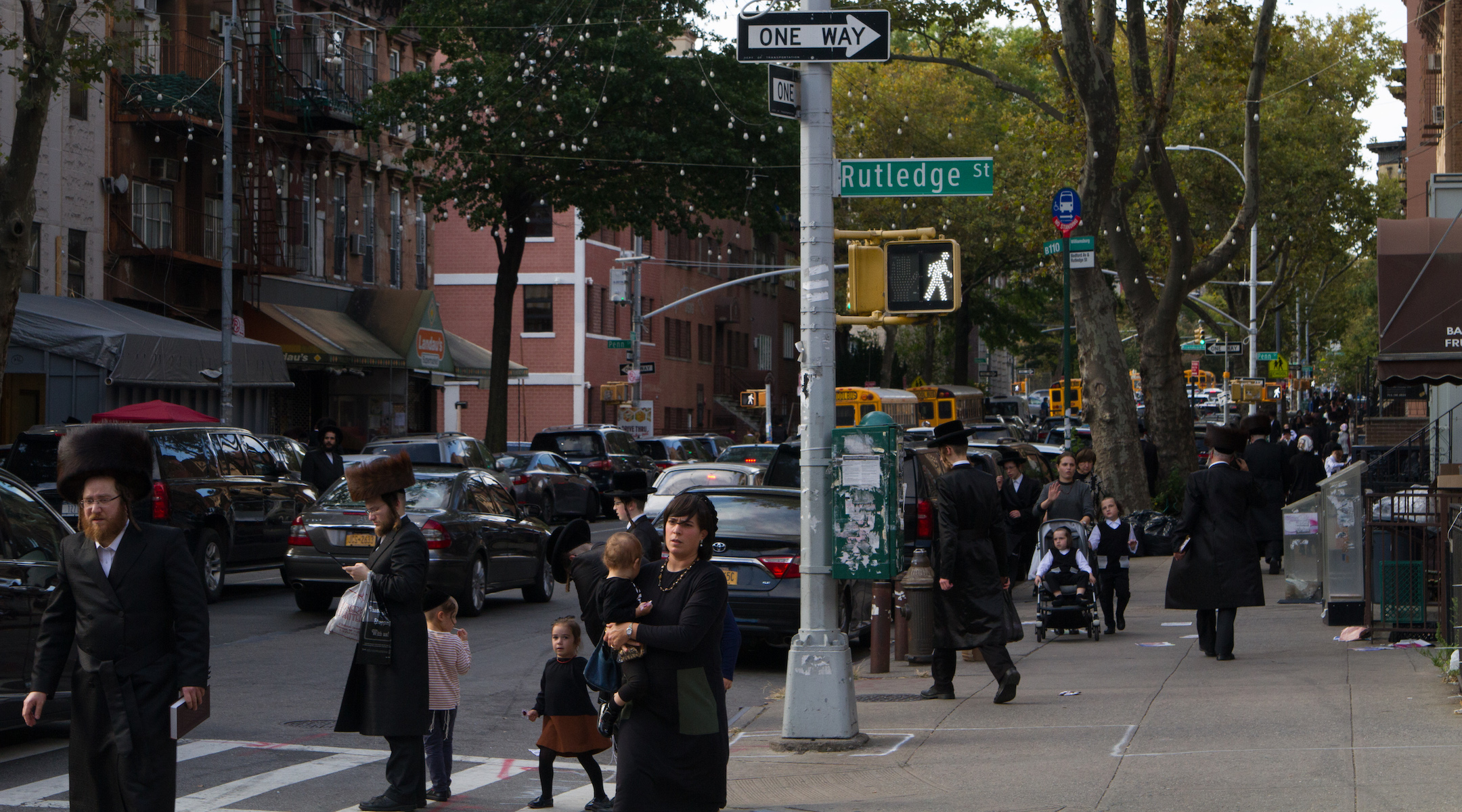 Residents of Hasidic Williamsburg have largely returned to pre-pandemic life, as seen on Sept. 29, 2020. (Daniel Moritz-Rabson)

But in the case of the continued large weddings and lack of compliance with interventions as simple as mask wearing, community leaders are playing a crucial role in encouraging defiance, according to some Hasidim.

“They take the lead from their rebbe, so if their rebbe isn’t walking around with their mask, they’re not going to think it’s important,” an administrator of a health clinic in Williamsburg said.

At the large Williamsburg wedding held in secret, the groom was one of the top Satmar rabbi’s grandsons.

“Who’s not going to go?” the clinic administrator asked.

New York state has banned large gatherings like weddings throughout the pandemic. But the scrutiny of gatherings increased in Brooklyn in the past several months as COVID cases ticked upward in the borough, including in heavily Orthodox neighborhoods.

As the COVID test positivity rates increased in Borough Park and Midwood in October, Cuomo created a new system meant to target “micro-clusters” of COVID cases. That system included new color-coded zones, with the heaviest restrictions in red zones, where schools and nonessential businesses would be shut down and synagogue capacity severely limited, and less stringent restrictions in orange and yellow zones.

The Williamsburg administrator said there had been a decrease in patients coming in for COVID testing at her clinic over the past two months. She wasn’t certain why, but said “it did seem to coincide with when the schools in Borough Park and Midwood were closed and when they threatened to close the schools in Williamsburg.”

Even though Borough Park and Midwood were kept in the red zones for several weeks, some yeshivas remained open in a repeat of what happened in the spring, when students attended classes in synagogue basements or entered school buildings through side doors to avoid detection.

Testing efforts, too, seemed to be oriented toward lowering the positivity rate with a singular goal in mind: to keep the schools and synagogues open.

Flyers circulated in Williamsburg warning that no one should be tested. Others, however, called on healthy people, especially those who had tested positive for coronavirus antibodies, to be tested to drive down the positivity rate.

Blimi Marcus, a nurse practitioner who lives in Borough Park, said the testing strategies appeared to be more about averting government restrictions than public health.

In October, she said, there were efforts to test community members in large numbers to drive down the positivity rates, as those rates were being used as the metric to determine whether an area would remain a red or orange zone, keeping schools closed.

Marcus believes those who are sick are still avoiding testing now. She said she often gets texts from community members with low oxygen levels who are trying to avoid being hospitalized.

“When the effort is to keep cases down in the community, no one wants to be the one that changes the narrative,” she said.

But Marcus said the community shouldn’t continue to hold weddings and expect schools to stay open.

“If you want to have your cake and eat it, too, you need to implement some changes,” she said.

But those who grew up in the community have little hope for change at this point.

Sam Katz, a research fellow at the National Institute of Allergy and Infectious Diseases who was raised in the Borough Park Satmar community, frequently talks to family members in the neighborhood about the pandemic. Katz said the fact that they haven’t seen “the other shoe drop” in the form of another wave of hospitalizations and deaths has made it hard to convince people to take the threat of the virus seriously anymore.

“For some reason, the impact of April and May didn’t translate to a cautiousness and a fear of the virus, it translated to ‘we’ve been through it.’ I don’t know the psychology of that.”

While it’s hard to know how many real cases there are if people won’t be tested, the clinic administrator in Williamsburg said she had not seen any noticeable spike in cases in the weeks since the massive wedding there. And there is the possibility that a majority of the guests already had COVID, making it unlikely that they would be infected again.

“A lot of them probably do have some type of immunity,” the administrator said of the men who likely attended. She said some 80% of men aged 18-55 who have been tested for antibodies at her clinic tested positive, indicating a previous infection.

“COVID becomes less scary for you when 80% of the people you know had it,” the Hasidic writer Labin said. “Everybody they know had it already. They forget about the people who died.”

He added: “People who died don’t have a voice anymore.”