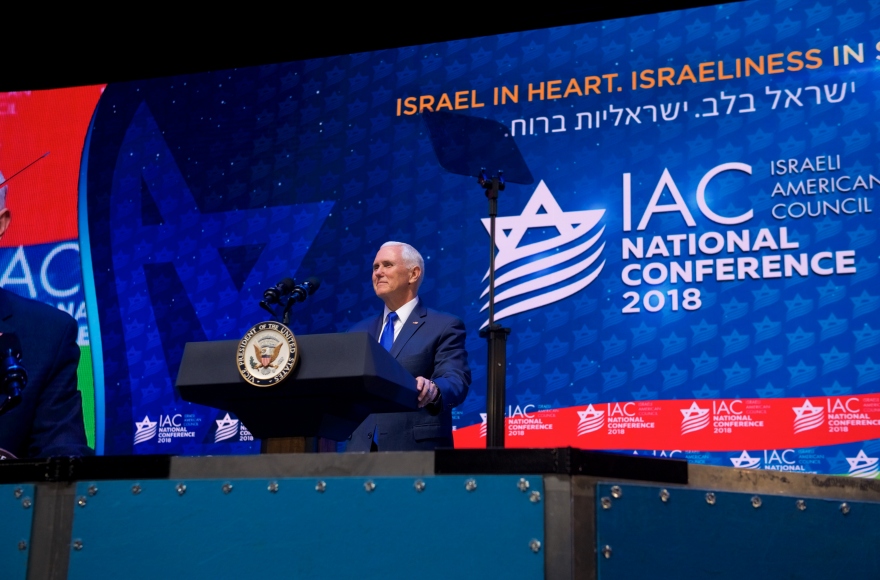 HOLLYWOOD, Fla. (JTA) — Sheldon Adelson, the casino magnate, his Israeli-born wife, Miriam, and Haim Saban, the Israeli-American entertainment mogul, entered the deck of the pool complex at the Diplomat Hotel here on Saturday night and chose a table to sit around and well, schmooze.

Never mind the frantic security detail that scrambled to find ropes and stanchions to create a cordon and to signal to other pool-goers that this bit of territory was occupied, thank you very much. Saban and Miriam Adelson took up a chaise lounge and leaned into one another, speaking in low tones.

Adelson scrolled through his smartphone, occasionally brushing away the cigar smoke emanating from Shawn Evenhaim, one of the businessmen who with the Adelsons and Saban founded the Israeli American Council 11 years ago.

From relatively modest beginnings, the Israeli American Council has become something of a powerhouse. At its annual conference, which this year was held at the Diplomat in this resort town, its director was unabashed in explaining the preeminent factor: money.

I asked Shoham Nicolet, another founder of the IAC and its current CEO, why an organization that three years ago was barely able to get congressional backbenchers to show this year managed to score Vice President Mike Pence; Rep. Nancy Pelosi, D-Calif., the once and likely future speaker of the U.S. House of Representatives; and Sen. Chuck Schumer, D-N.Y., the Senate minority leader.

“I think that it’s a fact that you have two major donors for two parties,” Nicolet said, referring to Adelson, a kingmaker among Republicans who is close to Pence, and Saban, a major fundraiser for Democrats. And then he added: “It’s also ten percent of Jewish Americans.”

IAC estimates that Israeli Americans, including Israelis who have emigrated stateside, their children and Americans who have made aliyah and returned, comprise some 600,000 people.

The IAC is, on paper, a bizarre hybrid: lobbying group, extended argument, angsty counseling session, an excuse to party.

In practice it works, kind of.

On Friday morning, at a session on Israel’s nation-state law, which defines the state as Jewish, Yifat Bitton, an anti-discrimination lawyer, and Dror Eydar, a right-wing columnist, wouldn’t let the other finish a sentence, veering all over a virtual highway of emotive issues, including who is a Jew and paying non-Jewish Israeli soldiers the honor they are due.

As the volume increased, moderator David Suissa, the editor in chief of the Los Angeles Jewish Journal, struggled to regain control, at one point whistling. Someone in the audience started singing “Hineh Ma Tov Umah Naim,” “How good and pleasant it is when a tribe of brothers comes together.”

Friday night, voices again rose in song, but this time welcoming Shabbat. Families crowded around tables until teenagers broke free, headed up to their rooms, switched into swimsuits and headed poolside until the wee hours. 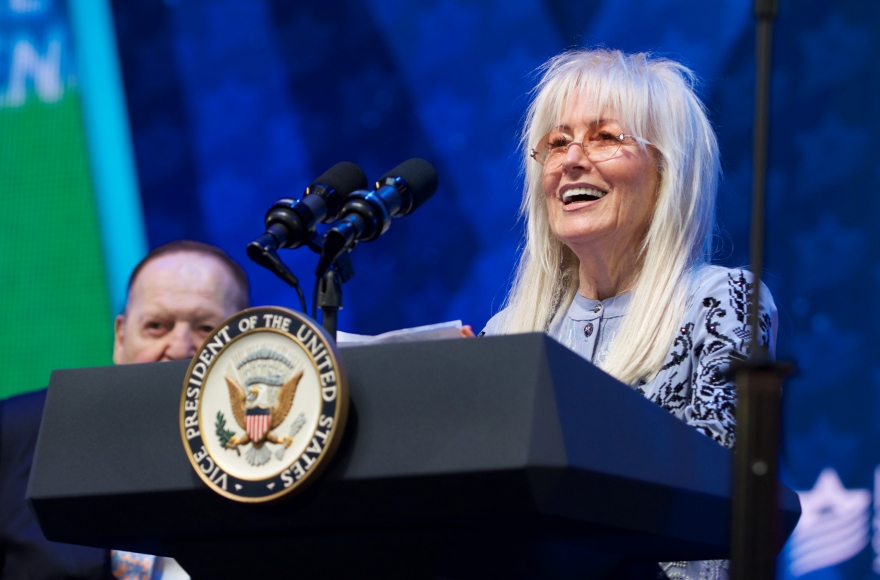 Saturday night, the security detail could have relaxed. Israelis packed the poolside in the clear cool late night breeze, but hardly anyone paid attention to the Adelsons or Saban. An older couple picked at a chicken dinner a table or two away. A group of young men headed down toward the water. Boaz Bismuth, who runs Adelson’s mouthpiece daily newspaper in Israel, Israel Hayom, slipped past the cordon and accepted a cigar from Evenhaim.

Partying seemed to be the point.

“Did you stay at the party?” a middle-aged woman asked another in the elevator on Sunday morning.

Something magical appears to have happened at that hour — Nicolet mentioned 2 a.m. in an impromptu news conference at the end of the gathering. One conference highlight, Nicolet said, was the Adelsons pledging to add $13 million to the $63 million they have already steered to the IAC. But the best part?

“The honest truth, it was yesterday at 2 a.m., to see business leaders, students, everyone dancing,” he said.

For all the good times, an angst continues to haunt the conference, in its fifth year: The perennial question is how do Israeli Americans fit into the larger American Jewish firmament. Breakout sessions on Saturday morning included, in English, “The interdependence of Diaspora and Israeli Jewry,” and simultaneously and more bluntly, in Hebrew, “Israeli-American: Contradiction or harmony? Coping with a split personality.”

Dilemmas persisting from past years include how Israelis, generally a synagogue-averse constituency, cope with the American Jewish social universe, which is centered around the synagogue; how one counters the cliches about Israelis that persist among American Jews (“Tell them what your parents said about me!” an Israeli man shouts at his American wife, who is on a panel — she demurs); and how one copes with American Jewish criticism of Israel.

The relationship between Israelis and American Jews seems simultaneously inevitable and fragile.

At the session on interdependence, Dani Dayan, the consul general in New York, said life and death decisions are not the place for American Jewish pressure.

“We Israelis will make the decisions and will not put up with being punished,” Dayan said, and then hesitated; “punished” seems misplaced. “Or to find a better word than ‘punished’ — met with indifference.”

But “indifference” seems awful as well, an even surer path to divorce than punishment, and Dayan searches again for the right metaphor.

“We may be Jewish, but our marriage is Catholic,” he said of Israelis and the Jewish Diaspora. “There is no divorce.”

This year, the most striking dilemma on how to resolve the Israeli and American Jewish identities is how to deal with anti-Semitism. For much of its existence, the IAC has taken up the gauntlet against hostility to Israel. The massacre at a Pittsburgh synagogue in October is something different, a primordial violence divorced from national struggle, from a prestate past that Israelis believed the existence of the state they love had obviated.

“I never thought that in my lifetime I would worry again about being a Jew,” Tzippy Holand, a Holocaust survivor, said Thursday in presenting an award to two Pittsburgh police officers, Michael Smidga and Daniel Mead, who helped end the killing at the Tree of Life synagogue complex, when an anti-Semitic gunman killed 11 worshippers. “If we don’t do everything we can to support Israel, we are not going to have a home we are not going to have where to escape to.”

Israel is one of the handful of nations on the planet where President Donald Trump is popular, and while the IAC abjures partisanship, there were speakers who unhesitatingly sang his praise, chief among them Pence.

“It’s a great pleasure to serve with a man who has made the alliance between America and Israel stronger than ever before,” Pence said Friday, citing Trump’s move of the U.S. Embassy to Jerusalem and his withdrawal from the 2015 Iran nuclear deal.

On Sunday, Ron Dermer, the Israeli ambassador to the United States, was even more effusive.

“There’s never been an administration — not just a president — who’s been more supportive of Israel than the Trump administration,” he said. 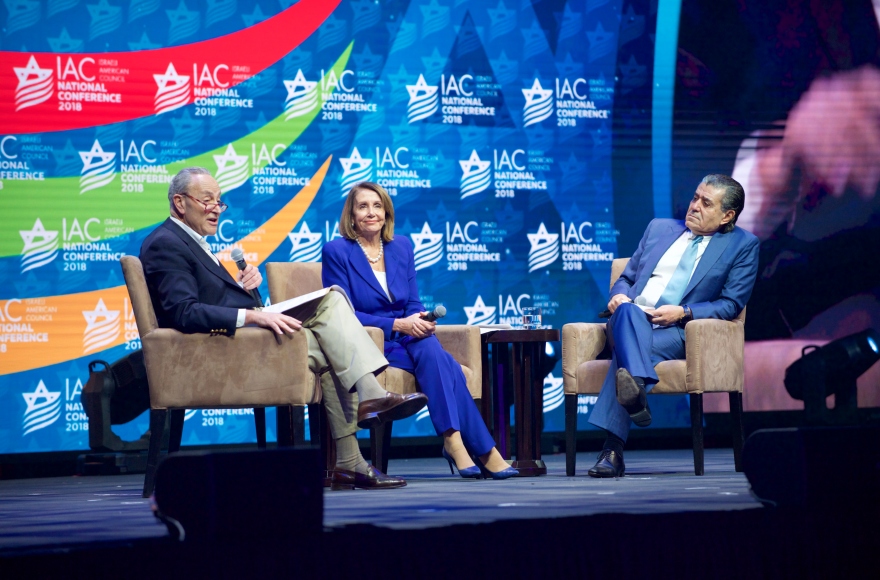 Schumer and Pelosi, usually bruising about Trump, barely mentioned the president in this venue, perhaps wary of attacking him on his turf, and instead make the case that Democratic support for Israel has not at all diminished.

Interviewed by Saban, each leader talked of his and her personal ties to Israel.

“If this capital crumbled to the ground, the one thing that would remain is our commitment to our aid. And I don’t even call it aid, our cooperation with the State of Israel,” Pelosi said.

Saban pressed them on anti-Semitism and the Pittsburgh massacre, an opening to take Trump to task: More than 70 percent of Jewish Americans said in a recent poll that his bias-tinged rhetoric helped fuel the anti-immigrant rage that drove the gunman.

Schumer and Pelosi edged a little closer to speaking of Trump’s seeming indifference to the consequences of bigotry, particularly after the deadly August 2017 neo-Nazi march in Charlottesville, Virginia, when he said there were “fine people” among the marchers and the counterprotesters. But they did not name him.

“There are some people who are kind of looking the other way at some of the anti-Semitism that is very visible,” Pelosi said.

Saban was not having it.