We went to the border to support our friends. Our disagreements were for another time. 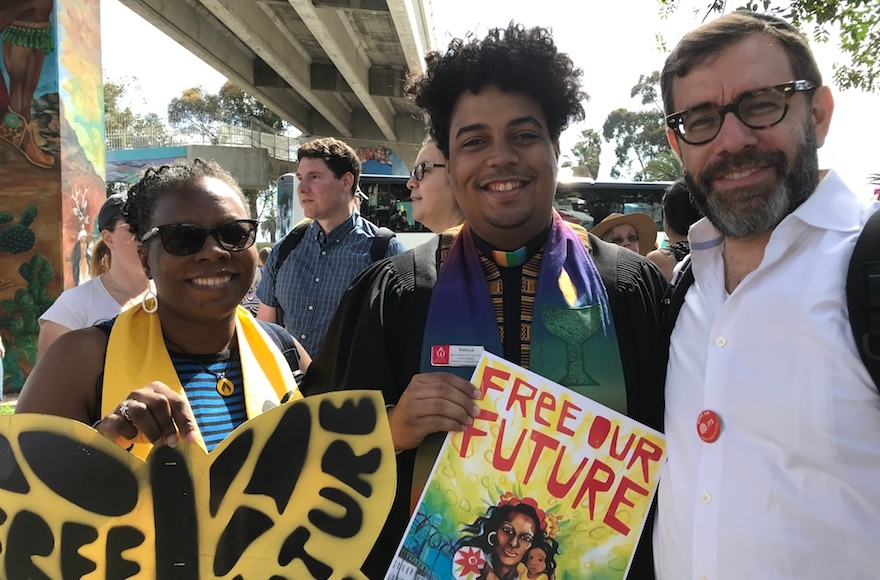 (JTA) — Ronald Reagan is reported to have said, “The person who agrees with you 80 percent of the time is a friend and an ally — not a 20 percent traitor.”

There is much wisdom in this sentiment, but the realities of alliance building in the current political environment raise complicated questions for many people: What happens when the balance shifts and the percentage representing agreement goes south of 80 percent? And what happens when one of the issues that constitute the 20 percent of disagreement is foundational to one’s identity?

How much disagreement can be overlooked before working together becomes impossible?

I found myself thinking about these questions on a flight to San Diego earlier this month. I was traveling with a group of Jewish religious leaders mobilized by T’ruah to participate in a series of actions initiated by the national “Latinx” group Mijente. We went to demonstrate our opposition to the president’s border policies, to protest the xenophobic rhetoric too often used in national conversations about immigration — and make a statement of our moral and religious beliefs.

Different from many of the protests I’ve been to in New York City, this action was organized and led by the Latinx and Chicanx communities most impacted by the immigration policies. I, along with other Jewish leaders, was there as a guest, stepping up in solidarity and as a witness to a moral crisis, but not occupying a central leadership role.

The question of what it means to be an ally arose for me at several moments during the action, when Mijente’s leaders spoke words that I simply disagreed with or even offended me. The platform for the march included a call to abolish ICE, the U.S. Immigration and Customs Enforcement agency — a policy stance that I believe is misguided.

Part of the power of Mijente is that its leadership is broad and less hierarchical, so we heard from many speakers. One leader praised us for showing up and “supporting the young kids throwing rocks at all borders” — conjuring up images of Palestinian youth throwing rocks at Israeli soldiers. Those words hurt my heart. Gaza, Ferguson and Texas were invoked in the same sentence, establishing facile moral equivalencies among clashes in Israel, a police shooting in Missouri and the separation of families at the U.S. border. Others described borders, fences and police departments as inherently immoral and imperialistic — again, not a position I accept.

As I listened to the speakers, I found it more helpful not to conceive of the words as policy statements. I was hearing how people who live very different lives than I do experience the world. And sometimes even policy statements express emotions and experiences that deserve to be heard. I like to think that our group of rabbis and cantors transcended any particular policy. I decided neither to agree nor disagree. For this moment, in the context of this protest, these were unhelpful binaries. I was standing there as an ally with a group of people who were suffering, not signing on to the particular policies they promoted. I hoped my presence communicated that they were not alone.

This does not mean that all speech would have been acceptable. And this does not mean that in other venues and at other times we should not debate ideas and policies. It does mean that there are moments in life when focusing on our shared humanity, and the suffering of another human being, must come first. When we see the world exclusively in categories of “friend” or “traitor,” we risk making ourselves blind to real suffering and missing an opportunity to build foundations for a real transformative exchange of ideas.

On the flight back to New York I thought about my experience. Despite those uncomfortable moments it was an honor to be a participant in the action. It was beyond moving to see undocumented immigrants protesting on the streets of San Diego, taking an enormous risk to publicly affirm their right to live without fear and threat. It was critical to show Latinx communities — who do not have a history of deep relationships with Jewish communities — that we stood with them. It was an honor to walk with other faith communities for these causes. But at moments it was complicated.

The U.S.-Mexico border was only one of the fault lines I encountered. Where do I draw my boundaries? Where does the Jewish community draw its lines? Sometimes it’s constructive to remember that “friend” and “traitor” are not the only ways to frame a conversation. Sometimes it is preferable to make the definition of one’s friend or foe just a little bit more porous to allow the humanity to come through.

The post We went to the border to support our friends. Our disagreements were for another time. appeared first on Jewish Telegraphic Agency.