(JTA) — Blair Braverman wasn’t the first Jewish woman to finish the Iditarod sled dog race, as we mistakenly reported. That title goes to Susan Cantor, who completed the race in 1992.

In a telephone interview with the Jewish Telegraphic Agency, Cantor, who lives in Chugiak, Alaska, confirmed that she was most likely the first Jewish woman to have finished the race.

Even though her husband had competed in the year the race before, Cantor explained, “I entered the Iditarod with more than the usual trepidation as I had recently been diagnosed with multiple sclerosis. Happily that was not a factor in my race nor in my life. I truly believe running Iditarod changed the course of my illness, giving me strength and new focus. I’ve enjoyed decades mushing with my dogs and my family.”

The Cantors first moved to Alaska after graduating from college.

“We went to Bethel, Alaska, to visit my husband’s brother. He had four sled dogs and a newborn baby. So we took over the management of the sled dogs. And that’s how I started,” Cantor said.

In The New York Times last fall, in a feature asking readers to submit pictures of dogs and weddings, Susan and Jim Cantor submitted a wedding photo with one of their dogs. 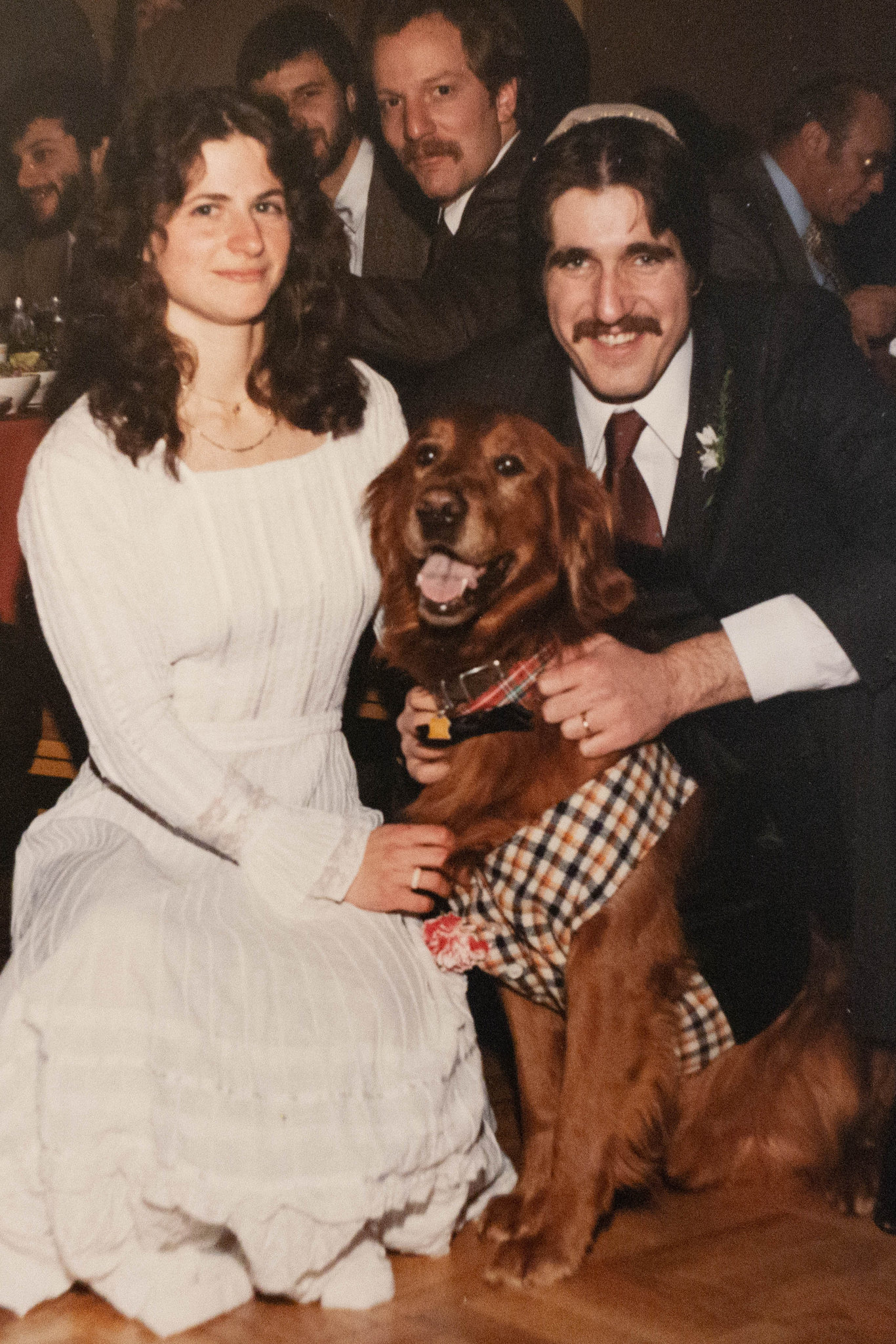 Susan and Jim Cantor, with Woodrow, a golden retriever/Irish setter, on their wedding day, Dec. 26, 1983. (Susan Cantor via The New York Times)

As they wrote captioning the photo, “Woodrow was our first dog. He moved with us from the University of Michigan to Alaska, back to Cornell University, and again to Alaska. He was an enthusiastic member of our early sled dog teams, a hobby we have kept up for 37 years. At our wedding, the rabbi would not allow Woodrow into the sanctuary, but he was allowed to attend the reception in the temple’s social hall. Woodrow’s checkered vest and bow tie were very stylish for 1983.”

Cantor is still deeply involved in the mushing community in Alaska; she’s on the board of directors at Chugiak Dog Mushers Association. Her children, now ages 21 and 24, raced with the junior mushers.

She also is involved in the Alaskan Jewish community: Cantor works as an event coordinator for Congregation Beth Sholom in Anchorage and is involved with Hadassah.

“Our synagogue once had fun with that, raffling off the opportunity to ride in a dogsled with a lifetime member of Hadassah!” she jokes.

Braverman never claimed to be the first Jewish woman to finish Iditarod, and following the race alerted her Twitter followers about Cantor’s achievement.

And how does Cantor feel about Braverman, whose Twitter feed has made her one of the most recognized faces in the sport?

“I think it’s exciting Blair finished, she seems to be doing a great job as an ambassador for the [Iditarod] race and the Jewish community,” Cantor said.

She added, “When I saw Blair come in on TV, she reminded me of myself.”

The feelings are mutual.

“I’m very proud to be in her company,” Braverman tweeted.