Want to teach your dog Yiddish? There’s a class for that. 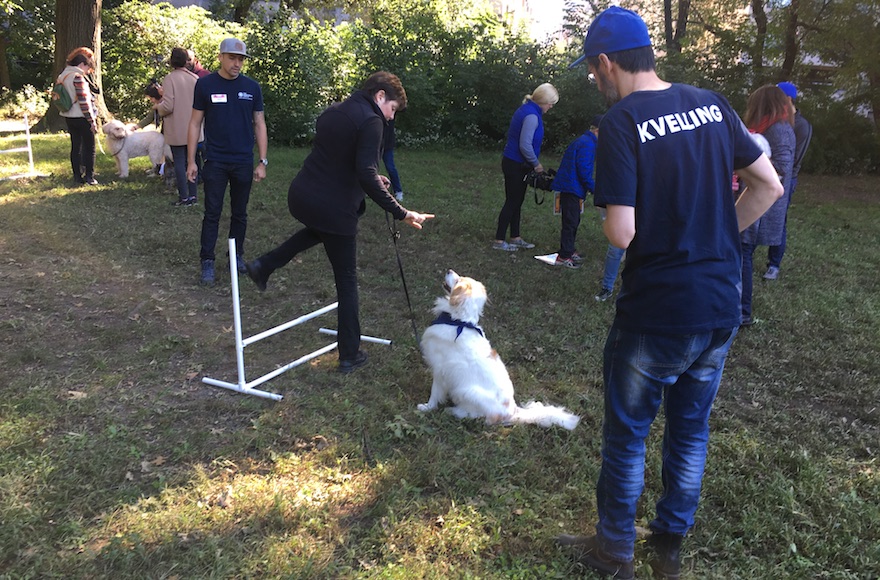 NEW YORK (JTA) — Dogs and their owners are a common sight in Central Park on the weekend, but there was something different about the group gathered on the grass on a recent Sunday morning.

The approximately 20 people could be seen and heard pointing at the ground while yelling “zits” and “shtai” and urging their dogs to “shpring” over hurdles.

A group of befuddled visitors from Canada who stopped by to ask what was going on seemed even more confused when they learned the answer: This was a Yiddish course. For dogs.

Sponsored by the Workmen’s Circle, the Jewish cultural society founded in 1900 by Yiddish-speaking immigrants, the workshop was a chance for dog owners to learn a little Yiddish while schmoozing with fellow pet owners. Yiddishist Leyzer Burko taught the course with dog trainer Miguel Rodriguez.

The fusion of German, Hebrew and Aramaic — once the language of millions of Jews from Eastern Europe but now mainly spoken by haredi Orthodox Jews  — seemed to come easy to some of the canines.

“She seems to be picking up pretty quickly on the commands,” kvelled Alexandra Straytner, who came to the course from the Morningside Heights section of Manhattan with her fiancé, Zachary Levine.

“We’re having a lot of fun,” Levine said. “Jofi has a bit of a barking problem, but I think she’s enjoying it.”

Other canines were less eager to follow commands in the mamaloshen.

Bibi, a tiny 7-year-old white Shorkie, mostly sat on the grass watching the other dogs respond to commands.

“She’s a bit of a Jewish diva,” said her owner, Joanne Freed.

The Upper West Side resident wasn’t exactly surprised, since Bibi had yet to master commands in English. Still, Freed was happy the dog got to hear some Yiddish.

“She’s adopted, but it’s her heritage,” she said with a laugh. 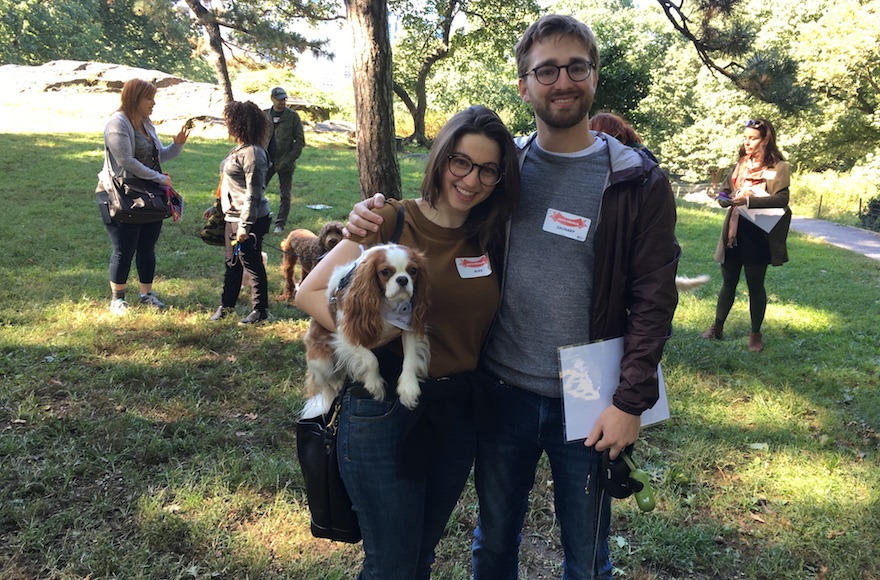 Pairing Yiddish and dogs may seem strange today, but it would have been even more unusual 100 years ago, said Burko, who received a doctorate in modern Jewish history from the Jewish Theological Seminary in New York.

Eastern European Jews historically were wary of dogs because they associated them with less-than-friendly landowners and aristocrats, he said.

That gave rise to expressions such as “A hunt iz vert dem shtekn,” meaning a dog deserves (to be beaten with) the stick and “a karger hunt,” which literally translates to “a stingy dog” and was used to mean a miser.

Biblical and rabbinic sources also associate dogs with negative qualities such as uncleanliness and violence.

But owners at the Central Park event were quick to praise, telling their canines “Gut” (rhymes with boot) instead of “good” and handing out treats when the dogs did as told.

Hannah Raykher was schepping plenty of nachas from her dog Archie Drucker, a 3-year-old black and white Havanese who seemed to be mastering the “zits” command.

Raykher, 17, who came to the workshop with her family, said teaching her dog commands in Yiddish was both fun and useful.

“I kind of like it more than the English now,” said Raykher, who lives in the Park Slope neighborhood of Brooklyn. “It’s more fun. Also, it will probably be nice in the park when everybody is yelling ’Go! Stay! Stop!’ [to yell] ‘Zits!’” 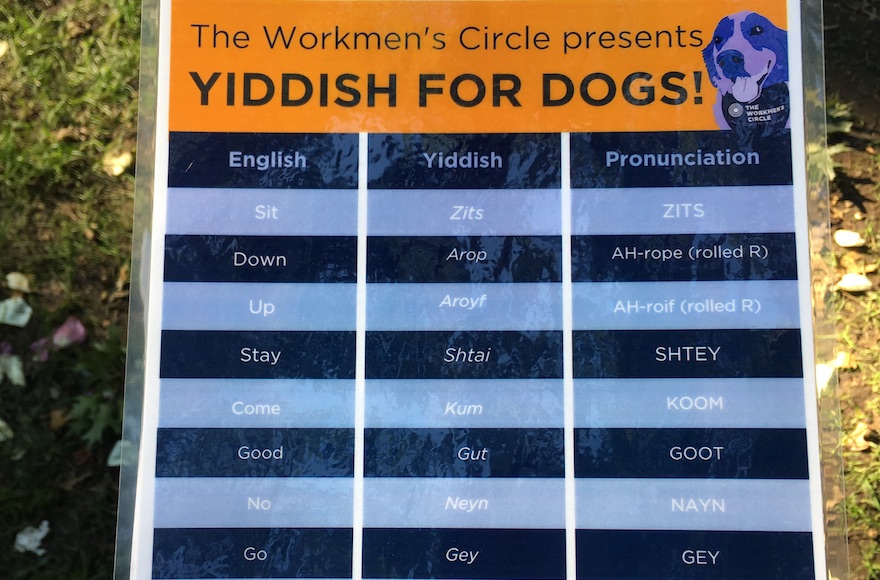 Participants at a “Yiddish for Dogs” workshop were given a sheet that showed various commands in Yiddish. (Josefin Dolsten)

Ann Toback, the executive director of the Workmen’s Circle, said there are a few other advantages to speaking to dogs in Yiddish.

Using a language different than the one the dog hears in everyday speech makes the command more effective, said Toback, who came up with the idea for the course and offered it for the first time last year. (Sunday’s workshop sold out.)

The fact that people love speaking in Yiddish also helps, she said.

“When most of us are using Yiddish, it makes us happy and we’re conveying that to the dogs,” Toback said while standing next to her dog Jesse.

“Too much we forget the thousand years of high culture because of the tragedy of how Yiddish ended in Eastern Europe,” she said, “but reconnecting to that, reconnecting to our heritage, to our hearts, is really part of this.”

The post Want to teach your dog Yiddish? There’s a class for that. appeared first on Jewish Telegraphic Agency.