Vigils held around the Jewish world for Pittsburgh shooting victims 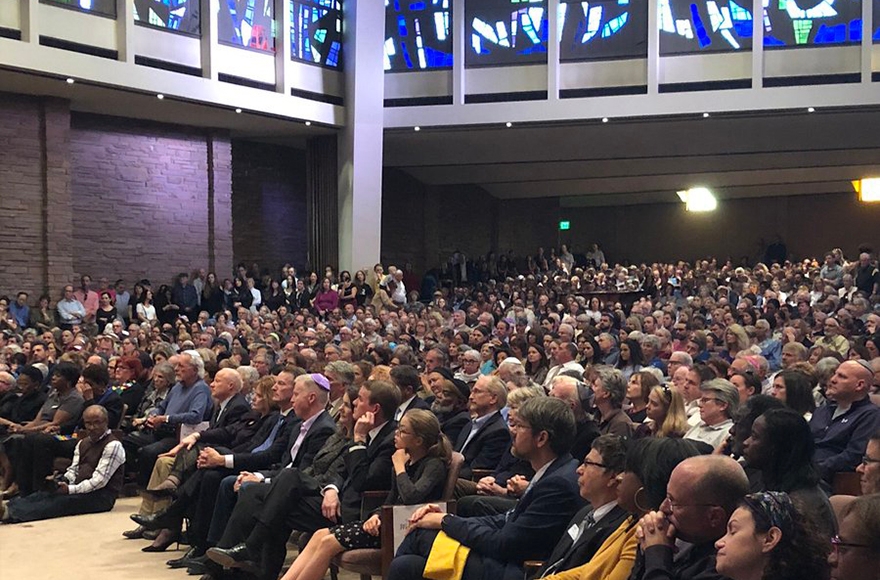 A vigil for the victims of the Pittsburgh synagogue shooting held at Temple Emanuel in Denver, Oct. 28, 2018 (Office of Gov. John Hickenlooper)

(JTA) — Jewish and interfaith vigils were held around North America in memory of the 11 victims of the Pittsburgh synagogue shooting.

In Canada, vigils and rallies were held in Montreal, Ottawa, Halifax and Vancouver, among other sites, according to the Richmond News of Vancouver. In Ottawa, a vigil Sunday at the Soloway Jewish Community Centre drew more than 300 people. Eleven chairs were left vacant on the stage, each bearing the name of a victim from the rampage carried out by a gunman at the Tree Of Life synagogue on Saturday morning, the newspaper reported.

On Saturday night, hundreds gathered in Brooklyn’s Prospect Park to sing, pray and speak out against the violence, WNYC reported. On Sunday, more than 1,300 people filled Congregation Ansche Chesed on Manhattan’s Upper West Side and hundreds more spilled into the streets for a solidarity rally.

In Chicago, in addition to prayer services held at numerous local synagogues, an interfaith gathering was held in Federal Plaza in solidarity with members of the Tree of Life synagogue and those killed last week in a suspected hate crime in Kentucky.

In Boston, one of the speakers Sunday at an emotional vigil on the Boston Common was Ariel Stein, a Boston University student who is a member of the Tree of Life Congregation.

“It is up to all of us to love each other … and to stand up for the other in society,” Stein told about 1,000 people, according to the Boston Globe.

The themes of the rallies ranged from simple solidarity with the Pittsburgh community to denunciations of anti-Semitism to more pointed political messages. In Washington, D.C., on Sunday, Bend the Arc: Jewish Action, a liberal Jewish group, was among the sponsors of a rally demanding “that this administration take responsibility for fomenting anti-Semitism and white supremacist violence.”

Jews and their allies around the world also remembered the Pittsburgh victims and prayed for healing.

In Jerusalem, some 500 Americans and Israelis gathered Sunday night at Zion Square for a candlelight vigil. The event was organized by The Meeting Place Dialogue Group, The Jerusalem Movement and the Hartman Institute Hevruta program, The Jerusalem Post reported.

Tonight members of the jewish faith gathered our diverse CO neighbors in solidarity with the Tree of Life community at Temple Emmanuel. Tomorrow we will continue the fight for tolerance & mutual respect, but on this night we paused, mourned & honored the lives lost. pic.twitter.com/jWqGV5QAlk