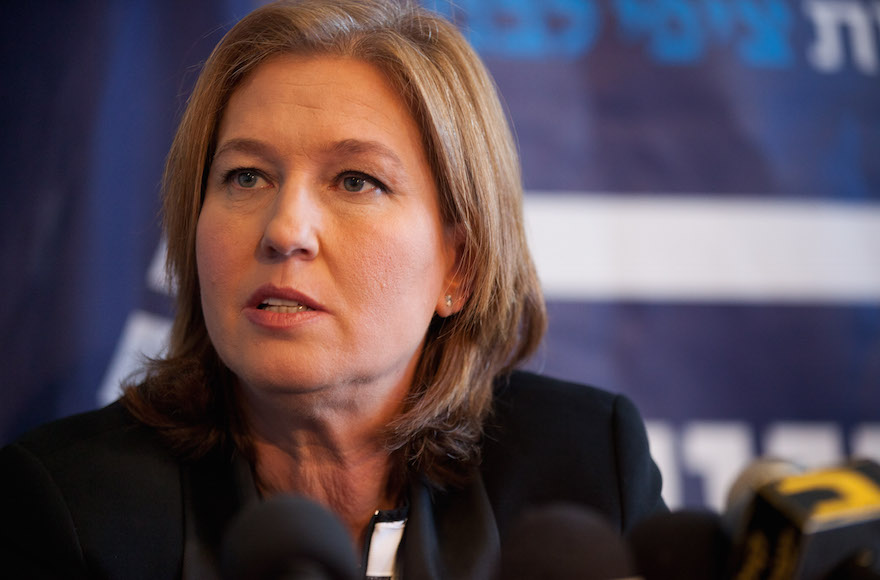 JERUSALEM (JTA) — Israeli lawmaker Tzipi Livni announced that she would exit politics at the end of the current Knesset term, and pulled her HaTnua party out of the upcoming national elections.

The party’s recent poll numbers showed that it would not make the electoral threshold to enter the next Knesset.

Livni said in a news conference on Monday that “We do not have enough political power to realize our principles, I will not forgive myself if votes are wasted, and today I halt the battle knowing that I did everything for my beloved country.” Thursday is the deadline for parties to present their candidates list for the April 9 election.

She choked back tears as she addressed her supporters.  “Today I apologize to you, to every woman and man who wrote, texted, phoned, hugged me on the street and told me to be strong. I’m still strong, I still believe our way is the right way for Israel, but for now, this decision is the right one,” she said.

She urged them to stay the course. “One path, one bloc that creates new hope. Unfortunately, that didn’t happen. I find it horrible that today only the brave stick to the vision that led to the establishment of Israel, which was written in the Declaration of Independence and united all factions of Zionism, which today is being so awfully delegitimized,” she said.

She called for the left and the center to unite in order to defeat Prime Minister Benjamin Netanyahu.

“Netanyahu is attacking the media, law enforcement and the judicial system. If he is not stopped, it would be the end of democracy in Israel,” she said.

“The last years have been tough, peace has become a dirty word, democracy is under attack, and having a different political position has become a curse, annexation has received more and more support, and now the one in charge is trying to take over the justice system while he attacks the media and law enforcement,” she said.

Livni’s HaTnua party has six members in the current Knesset, including her. Her party merged for the last elections with the Labor Party under the name Zionist Union. On January 1, Labor head Avi Gabbay unceremoniously dissolved the partnership, blindsiding Livni with the announcement.

Livni, 60, was formerly a leader in the Likud Party, later joining the centrist Kadima party upon its formation in 2005, and then heading it. She has served in Knesset since 1999, and has held several ministerial positions including Justice and Foreign Affairs. She currently serves as Leader of the Opposition.