Ugandan Jew denied visa to study at yeshiva in Israel 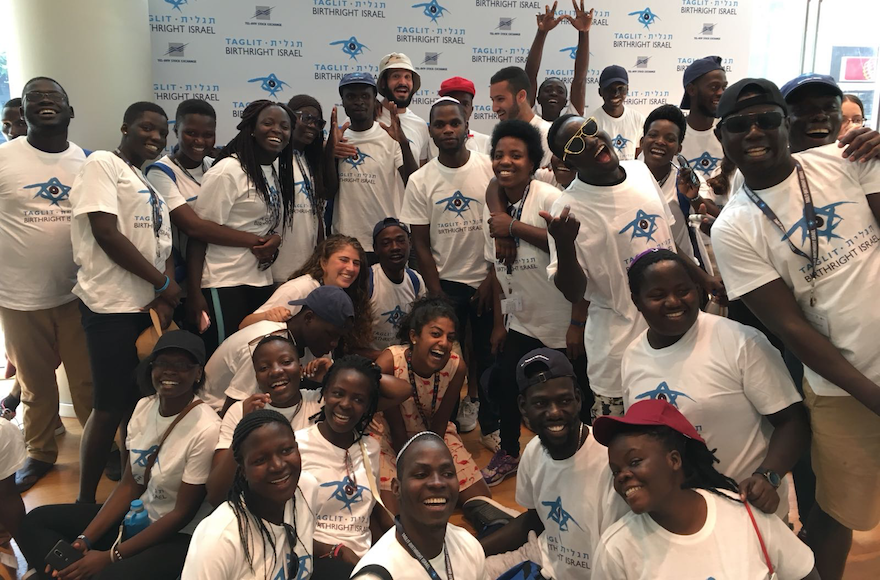 In September, members of the Ugandan Jewish community participated in its first Birthright trip. Asiimwe Rabbin is in the foreground, center. (Birthright Israel)

(JTA) —A Jewish man from Uganda who led a Birthright trip to Israel in September was denied a visa to study at a yeshiva there.

Asiimwe Rabbin, 28, had intended to participate in a program at the Conservative yeshiva in Jerusalem, but was told this week he would not get the required visa because Israel’s Interior Ministry does not recognize his community as Jewish, Haaretz reported. Last month, Rabbin led the first-ever Birthright trip for Jews from Uganda.

The visa is supposed to be available to people who qualify for Israeli citizenship through the Law of Return — which applies to anyone who has at least one Jewish grandparent, converted to Judaism or is married to a Jew.

Despite the fact that the Ugandan Jewish community, also called the Abayudaya, was recognized by the Jewish Agency for Israel in 2016, members have faced difficulties obtaining visas to enter the country.

Rabbin’s program is sponsored by Masa, which brings young Jews from around the world to participate in programs in Israel. The organization’s executive director, Liran Avisar Ben Horin, told Haaretz that it had to heed the Interior Ministry’s rulings regarding visas.

“As Masa is subject to conditions set by the Interior Ministry in this regard, we were forced to turn down his request for a Masa visa,” she said.

The Ugandan community traces its roots to the early 20th century, when a former leader read the Bible and embraced Judaism. Most members were converted under the auspices of American Conservative rabbis in the early 2000s and thus are not recognized as Jewish by Israel’s mostly haredi Orthodox Chief Rabbinate.

Today the community, which is based in the rural town of Mbale, has seven synagogues — including a 7,000-square-foot center that opened in 2016 — a mikvah and two Jewish schools.