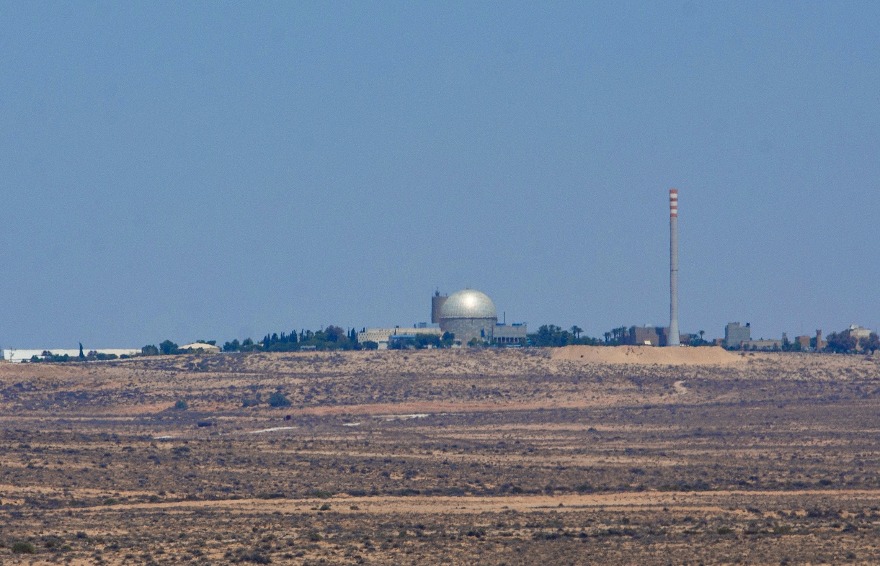 View of the nuclear reactor in Dimona in southern Israel. (Moshe Shai/FLASH90)

JERUSALEM (JTA) — Israeli Prime Minister Benjamin Netanyahu has come under fire a tweet suggesting that history belongs to the strong and “the weak crumble.”

Shorn of its context — the renaming of a nuclear  research center in honor of the late Shimon Peres, the architect of Israel’s nuclear program — it suggested to some that Netanyahu was either mocking the Palestinians or insulting victims of the Holocaust.

The official Twitter account of the Office of the Prime Minister tweeted excerpts from a speech Netanyahu delivered last week at the renaming ceremony for the Shimon Peres Negev Nuclear Research Center in Dimona.

“Shimon aspired toward peace but he knew that true peace can be achieved only if our hands strongly grasp defensive weaponry. In the Middle East, and in many parts of the world, there is a simple truth: There is no place for the weak,” Netanyahu said.

Peres, who died two years ago, was the architect of a nuclear program that Israel does not officially acknowledge, although in his later years he was more closely identified with the quest for peace with the Palestinians.

It is those two sentences that critics on Twitter zeroed in on.

“Is that your excuse for murdering Palestinians? ‘Might make right’? What a sad excuse for a fascist,” read one of scores of responses to the tweet.

“No, it’s Israel’s reason for existing. History has taught Jews that they need to be able to defend themselves against their enemies, currently represented mainly by Iran. Israel does not murder Palestinians,” another tweeter responded to the criticism.

Some of the responses focused on Jews as victims during the Holocaust and compared Netanyahu to Hitler: “I’m pretty sure this is what Hitler was thinking when he slaughtered millions of your people. And I’m certain you’d be going bonkers if a Muslim said this. It may be historically accurate, but it’s not what we need to hear from a world leader,” read one.

“After WWII, how could you say such a thing! Do you not realize how indirectly disparaging this is to those who died in concentration camps? Or who were slaughtered in the villages of Europe? I’m truly appalled this comes from Israel,” read another.

This too: “Hitler would be proud. What a shame that a nation of such noble and distinguished people who suffered so much over millennia should be led by someone with your kind of mindset. Israel deserves so much better.”

“How quickly the oppressed become the oppressors,” read another, succinct, tweet.

The statement also led to many responses in support of the Palestinians and declarations that Israel has no right to exist.

Several also cited Psalm 37:11, which reads: “But the meek shall inherit the earth; and shall delight themselves in the abundance of peace.”

Netanyahu’s full speech suggests his audience may have been Iran’s leaders, who often speak of eliminating Israel. Additional excerpts of the speech were released by his office.

“But our enemies know very well what Israel is capable of doing. They are familiar with our policy. Whoever tries to hurt us – we hurt them. I am not spouting slogans. I am describing a persistent, clear and determined policy. This is our policy. It is backed by appropriate deployment, equipment, preparedness and – in the hour of need – appropriate orders,” he also said.

He noted that Israel is working to prevent Iran from establishing a military presence in Syria and eluded to the cancellation of the world power’s nuclear deal with the Islamic State.

“Whoever threatens us with destruction puts himself in similar danger, and in any case will not achieve his goal,” Netanyahu said in a veiled threat to Iran, and a possible acknowledgement of the existence of a nuclear arsenal.

Israel repeatedly has stated that it would not be the first country to introduce such weapons to the region. It has, however, declined to sign the international nuclear non-proliferation treaty. Israel is believed by several international sources to possess up to several hundred nuclear warheads and the capability to deliver them from the air and sea.

Iran clearly felt threatened by Netanyahu’s statements. Hours after Netanyahu’s speech was reported, Iranian Foreign Minister Javad Zarif tweeted: “Iran, a country without nuclear weapons, is threatened with atomic annihilation by a warmonger standing next to an actual nuclear weapons factory. Beyond shameless in the gall.”