Trump pressured Jeff Sessions to resign. That means Rod Rosenstein is no longer watching over the Russia investigation. 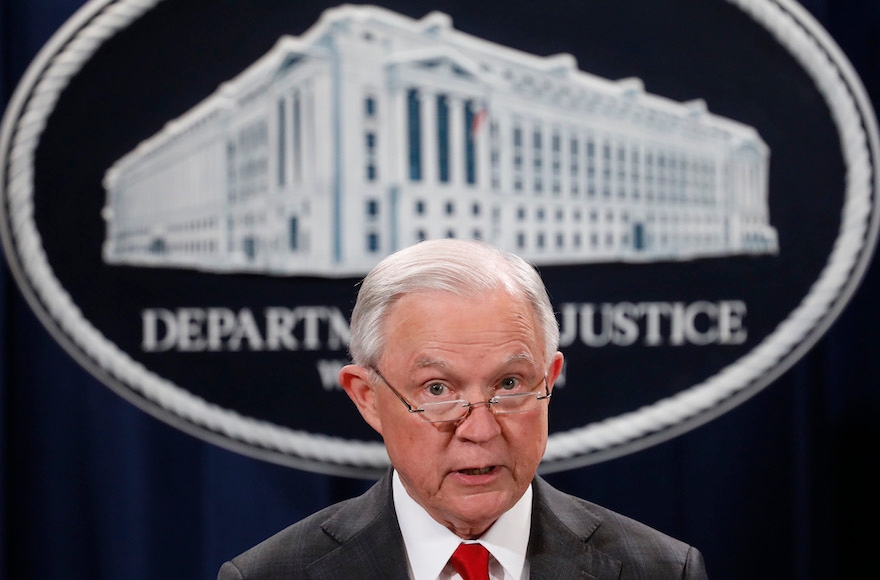 Jeff Sessions speaks at a press conference at the Department of Justice in Washington, D.C., Oct. 26, 2018. His replacement has strongly criticized the Mueller investigation. (Aaron P. Bernstein/Getty Images)

Trump has dismissed the probe, which has brought down multiple indictments and convictions, as a hoax and has been furious with Sessions for recusing himself from supervising Mueller. Sessions did so because he was involved in Trump’s 2016 presidential election campaign.

In his stead, Rosenstein, the Jewish deputy attorney general, has supervised the probe and defended its integrity against Trump’s attacks. In turn, the president has aimed some of his rhetorical fire at Rosenstein.

Trump may name anyone he wants as acting attorney general, although normatively the deputy — in this case, Rosenstein — would have assumed the role.

Whitaker has attacked the probe in the past, saying Mueller had gone “too far” and that he should not cross a “red line” of examining the president’s personal finances. There have been allegations that Trump’s real estate and branding business have connections to figures close to the Kremlin. The Mueller probe is focused on whether and how Russia interfered in the 2016 election, allegedly on Trump’s behalf.

Trump fired Sessions the day after midterm elections swept a Democratic majority into the U.S. House of Representatives, which gives Democrats options to increase congressional oversight.

Rep. Jerry Nadler, D-N.Y. who is likely to chair the Judiciary Committee, called the firing of Sessions “a constitutionally perilous moment for our country.”

Nadler, who is Jewish, said it would be “wholly inappropriate for Mr. Whitaker to supervise the Special Counsel investigation given his documented history of opposition to it.” He said that his committee would investigate Sessions’ firing.

The post Trump pressured Jeff Sessions to resign. That means Rod Rosenstein is no longer watching over the Russia investigation. appeared first on Jewish Telegraphic Agency.