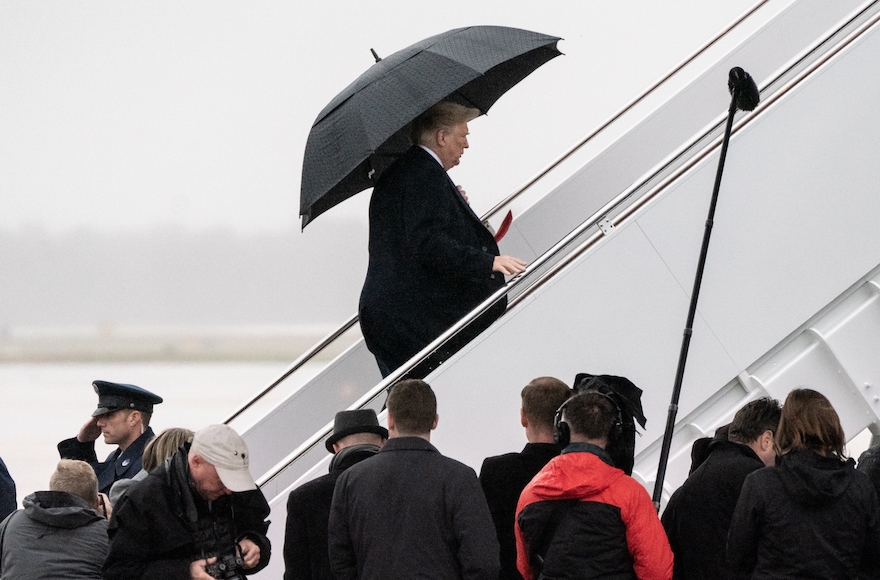 President Donald Trump boards Air Force One at Andrews Air Force Base in Maryland after speaking to reporters about the fatal shooting at the Tree of Life Synagogue in Pittsburgh, Oct. 27, 2018. (Ken Cedeno/Pool/Getty Images)

(JTA) — President Donald Trump said the outcome of a synagogue shooting in Pittsburgh on Saturday morning “would have been far better” if the synagogue had more armed protection inside.

“This is a case where if they had an armed guard inside, they might have been able to stop him immediately,” Trump told reporters just hours after the shooting. “If they had protection inside, the results would have been far better.”

The shooting left 11 dead and several others injured.

Trump also said those who commit violence inside houses of worship should receive the death penalty.

“When people do this, they should get the death penalty and they shouldn’t have to wait years and years,” he said. “They should pay the ultimate price.”

The president repeatedly referred to the synagogue shooter, identified as 46-year-old Robert Bowers, as a “wacko,” a “maniac” and “crazy.” Bowers was taken into custody.

Trump’s comments drew condemnation on social media from many who saw him as blaming the synagogue for the incident. U.S. Rep. Don Beyer, D-Va., criticized the president for a “lack of empathy.”

Trump’s plan to combat these tragedies is to put guns and armed guards in places of worship.

His lack of empathy is just staggering. https://t.co/SFTekhkTjQ

Tommy Vietor, a political commentator and podcaster who worked in the Obama administration, also lashed out at Trump.

The President thinks that the solution to preventing gun violence is to have armed guards at a bris. A fucking bris.

Trump’s daughter Ivanka, who is Jewish, tweeted that “America is stronger than the acts of a depraved bigot and anti-semite.”

America is stronger than the acts of a depraved bigot and anti-semite.

All good Americans stand with the Jewish people to oppose acts of terror & share the horror, disgust & outrage over the massacre in Pittsburgh.
We must unite against hatred & evil.

Later, at an event in Indiana, Trump added formal remarks on the shooting.

“This wicked act of mass murder is pure evil,” Trump said. “This was an anti-Semitic act. You wouldn’t think this would be possible in this day and age.”

He added: “Our minds cannot comprehend the cruel hate and twisted malice that could cause a person to unleash such terrible violence, during a baby naming ceremony at a sacred house of worship on the holy day of Sabbath.”

He added, “anti-Semitism and the widespread persecution of Jews represents one of the ugliest and darkest features of human history.”