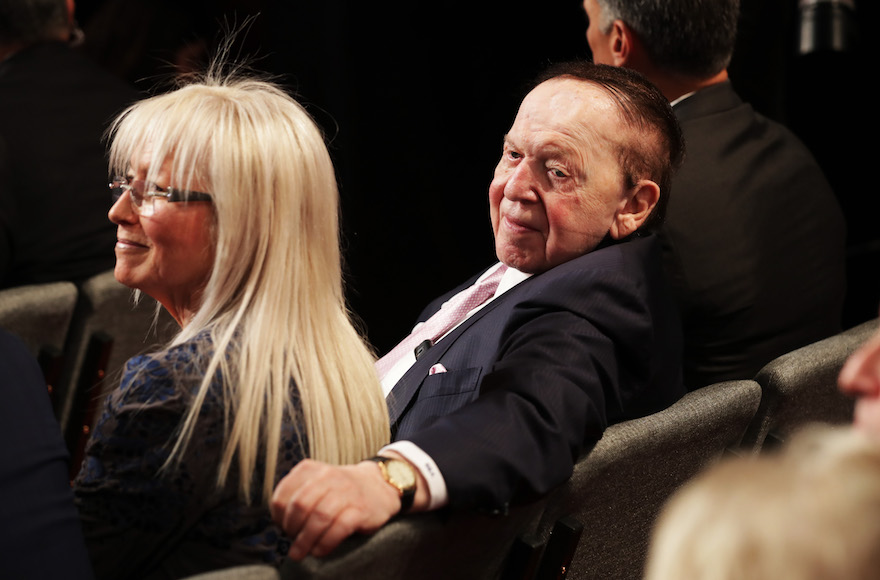 WASHINGTON (JTA) — A wide-ranging report into the relationship between President Donald Trump and Sheldon Adelson says that Trump intervened on Adelson’s behalf in the Jewish billionaire’s quest to open a casino in Japan.

“If our company has any advantage, it would be because of our significant Asian operating experience and our unique convention-based business model,” Reese told ProPublica/WNYC. “Any suggestion we are favored for some other reason is not based on the reality of the process in Japan or the integrity of the officials involved in it.”

Abe also met with Adelson during his visit in February 2017, a month after Trump assumed office. Since then Abe has advanced legislation that would allow casinos to open in Japan, although it is not clear yet that Adelson’s Sands operation would be given a license.

Adelson, the Las Vegas-based casino magnate and one of the wealthiest men in the world, spent $20 million to help elect Trump and another $5 million for his inauguration. His oft-stated rationale for backing Trump is the president’s Israel policy, which aligns closely with the Israeli right wing, including moving the U.S. Embassy to Jerusalem and pulling out of the 2015 Iran nuclear deal.

ProPublica/WNYC listed other benefits that have accrued to Adelson, including a provision in last year’s tax rehaul that gives a break to companies that incur high taxes abroad. Adelson paid lobbyists to argue for the provision, and Sands saved $1.2 billion because of it.

Additionally, Scott Pruitt, the former administrator of the Environmental Protection Agency, expedited a deal under which the EPA would examine the technology used by Watergen, an Israeli company that manufactures a device that pulls potable water from the air.

Pruitt pushed through the deal after meeting with Adelson and over the objections of EPA scientists, who said the technology was not novel. Watergen, in a statement, disputed the claim. “Watergen’s revolutionary patented technology and energy efficiency is what distinguishes Watergen from all other companies that produce atmospheric water generators,” said the statement emailed to JTA. “It extracts water from the air and then produces very high-quality drinking water while using a minimal amount of electric power and in the most cost-effective way.

Watergen’s owner, Mikhael Mirilashvili, is a friend of Adelson’s, but Adelson does not profit from the company, nor did he profit from the deal with the EPA, ProPublica/WNYC reported.