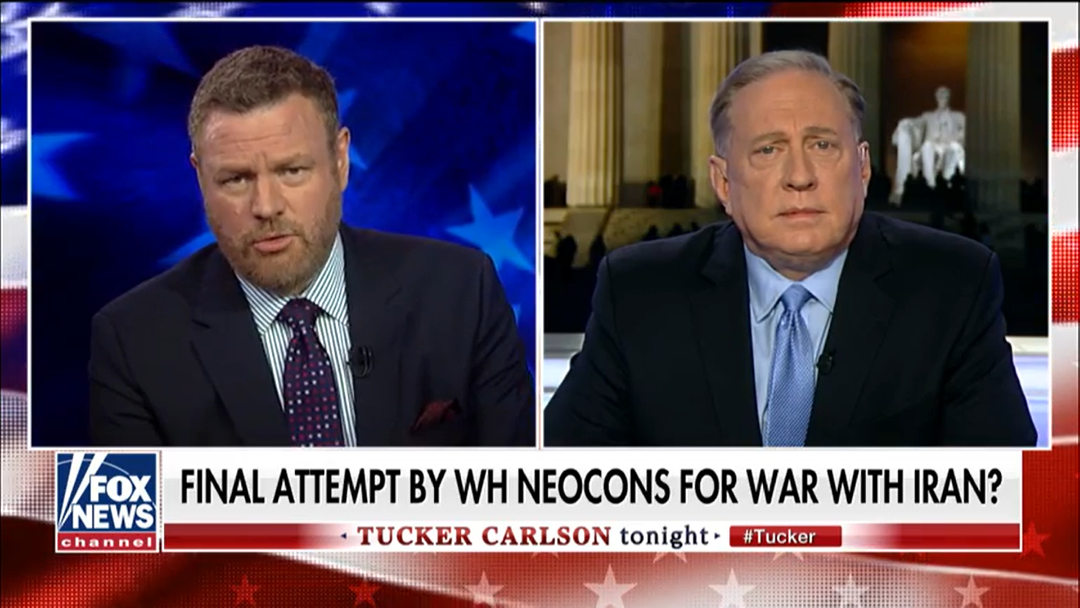 Trump last week in the wake of his loss in the presidential election to Joe Biden purged senior staff at the departments of Defense, State, and Homeland Security and named loyalists to the jobs. Among the new hires was Macgregor, who is advising the new acting defense secretary, Christopher Hill.

CNN’s KFile uncovered interviews in which Macgregor, a decorated combat veteran who appears frequently on Fox News and other conservative media, says “pro-Israel” donors and the pro-Israel lobby are behind efforts to drive the United States into war.

Last year in an interview with a Florida talk show, Macgregor explained what was behind what he said was a push to war with Iran.

“We’re dragged in because of our close relationship with Israel,” he said.

“You have to look at the people that donate to those individuals,” Macgregor said, referring to John Bolton, who was then the national security adviser, Michael Pompeo, the secretary of state, and Sen. Lindsey Graham, R-S.C. “Mr. Bolton has become very, very rich and is in the position he’s in because of his unconditional support for the Israeli lobby. He is their man on the ground, in the White House. The same thing is largely true for Mr. Pompeo, he has aspirations to be president. He has his hands out for money from the Israeli lobby, the Saudis, and others.”

In the same interview, he blamed pro-Israel policy for driving the United States into the Iraq conflict after the Sept. 11, 2001, terrorist attacks, a long-discredited theory popular among conspiracy theorists on the far left and the far right.

“When the opportunity came with 9-11 to expand the horizons of conflict if you will and pursue the opportunity to develop in theory an Anglo Saxon democracy on Arab soil that would be friendly to Israel which was Paul Wolfowitz’s argument, the group we call neocons jumped on it,” he said. Paul Wolfowitz was then a deputy secretary of defense. He is Jewish. He was influential, but not determinative, in shaping the war effort, and Israel did not feature prominently if at all in his arguments.

“The American people were adamantly opposed to being involved in World War II,” he said in the same interview, which is false. Polls showed strong support for U.S. involvement in the war after the 1941 Pearl Harbor attack.

CNN uncovered another interview with the Russian state-run TV station, RT, in 2012, where Macgregor named the American Israel Public Affairs Committee as pushing Congress to launch military strikes against Iran.

“I think the American Israeli Public Affairs Committee and its subordinate elements or affiliated elements that represent enormous quantities of money that over many years have cultivated an enormous influence in power in Congress,” he said. “I think you’ve got a lot of people on the Hill who fall into two categories. One category that is interested in money and wants to be reelected, and they don’t want to run the risk of the various lobbies that are pushing military action against Iran to contribute money to their opponents.”

Macgregor was Trump’s nominee to be ambassador to Germany, but his nomination was stalled in August after KFile uncovered other controversial commentaries, including a call for martial law on the U.S.-Mexico border, bigoted statements about Muslims, and saying Germany’s efforts to grapple with the Holocaust era reflected a “sick mentality.”

Jewish groups in August called on Trump to withdraw the nomination. The American Jewish Committee repeated the call over the weekend. “We repeat that call now in light of Pentagon post and revelations about more vile comments,” AJC CEO said on Twitter.

AIPAC on Twitter said, “Our bipartisan efforts are reflective of American values and interests. We will not be deterred in any way by ill-informed and illegitimate attacks on this important work.”

Mark Dubowitz, the CEO of Foundation for Defense of Democracies, a think tank with hawkish views on Iran which has been influential on Trump administration Iran policy, also weighed in.

“So is this what a Trump second term would have looked like?” Dubowitz said on Twitter. “Sad, as someone liked to say.” One of Trump’s favorite sarcastic expletives is “Sad!”

Republicans so far have been silent. Last year the party demanded that Congress censure a Minnesota Democrat, Rep. Ilhan Omar, for suggesting that money was behind pro-Israel policy in Congress. Trump and other Republicans have accused Democrats of nurturing anti-Semitism for failing to rout her. Omar has apologized for some, but not all, of her remarks.

It’s not clear why Trump wants the loyalists in place with just over two months left in his presidency.