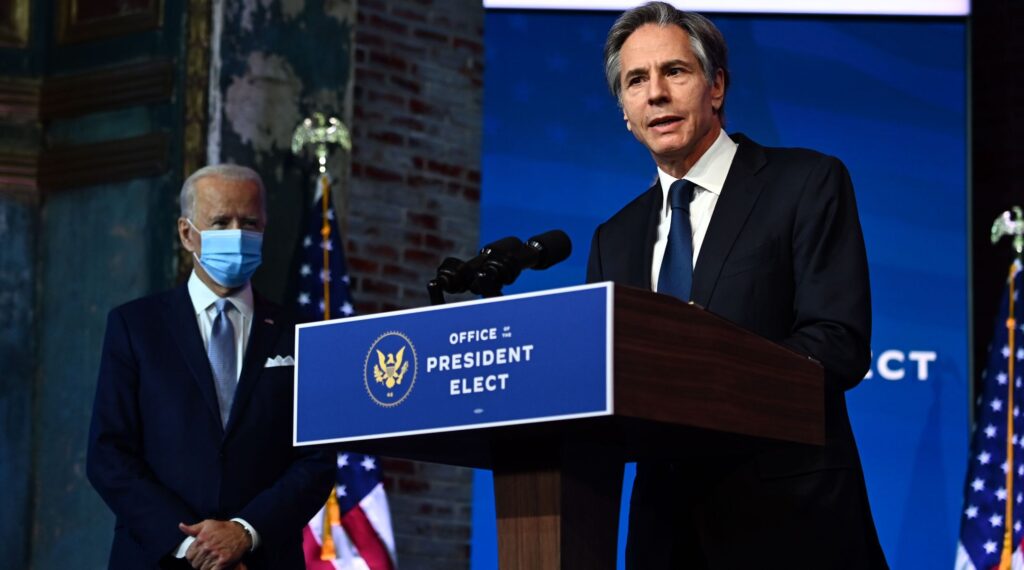 Blinken also noted other Jewish ancestors who were refugees near the outset of his acceptance speech in Wilmington, Delaware.

“For my family, as for so many generations of Americans, America has literally been the last best hope on earth,” Blinken said. “My grandfather, Maurice Blinken, fled pogroms in Russia and made a new life in America. His son, my father Donald Blinken, served in the Air Force during World War II and then as a U.S. ambassador. He is my role model and hero.

“His wife, Vera Blinken, fled communist Hungary as a young girl and helped future generations of refugees come to America. My mother, Judith Pisar, builds bridges between America and the world through the arts and culture. She is my greatest champion.”

His mother’s second husband was a Holocaust survivor, author and memoirist.

“And my late stepfather, Samuel Pisar, was one of 900 children in his school in Bialystok, Poland, but the only one to survive the Holocaust after four years in concentration camps,” Blinken said.

“At the end of the war, he made a break from a death march into the Bavarian woods. From his hiding place, he heard the rumbling sound of a tank. Instead of an Iron Cross, he saw a five-pointed White Star. He ran to the tank. The hatch opened. An African-American GI looked down at him. He fell to his knees and said the only three words he knew in English that his mother had taught him: God Bless America. The GI lifted him into the tank, into America, into freedom. That’s who we are.”

At the same ceremony, Biden introduced his designated national security Cabinet, including Alejandro Mayorkas, a Cuban-born Jew he nominated to be Homeland Security secretary.

Mayorkas, whose mother was a Romanian-born Holocaust survivor, in his acceptance remarks spoke of his parents’ flight from communist Cuba.

“My father and mother brought me to this country to escape communism,” he said. “They cherished our democracy and were intensely proud to become United States citizens.”