This physician provides abortions and brit milahs. She says her Jewish values drive both practices.

FALLS CHURCH, Va. (JTA) — It comes, Sara Imershein says, when the folks are noshing after the deed is done — once she has performed a brit milah, a ritual circumcision.

“Someone will say, ‘Oh, I saw your website,’” Imershein said in a recent interview. At first she would think her interlocutor was referring to the site that advertises her services titled “Certified by the National Organization of American Mohelim.”

It’s not the case: They are referring to her other practice, providing abortions, and advocating for laws that allow them. That website is headlined “Dr. Sara’s ADVOCACY for WOMEN.”

The questions at brit milah celebrations, and the warmth she senses from those who appreciate her role as an abortion provider, no longer surprise her: She sees each practice as driven by Jewish commandments.

“They feel safe talking to someone who is religious and who is a doctor,” Imershein said.

“Creating the family you want” is what drives her two practices.

Imershein, 65, had just completed a day’s work at the women’s health clinic in suburb Virginia where she provides abortions. She gave up her Washington, D.C.-based OB-GYN practice in 2015 to provide abortions full time. She sees the work as her mission, a path she’s been on since she secured her medical degree from Emory University in 1980.

“I always said as a physician, when I grow up and retire, I’m going to do abortions because it was a way to use my techniques to alleviate suffering,” she said.

As much as there are similarities — performing abortions and circumcisions, she charges enough to cover costs, including insurance, and does not make much more — there is a key difference in the trajectory of each of her passions. Imershein came to understand Jewish laws on reproduction because of her devotion to making abortion available to women. She is versed in advocacy to keep circumcision legal because of her religious training as a mohelet (Hebrew for a female mohel).

Imershein volunteered as an undergrad at a women’s health center at the University of Pennsylvania after Roe v. Wade, the 1973 Supreme Court ruling that said abortion was a woman’s constitutionally protected right. She was from New York, where abortion had been legal since 1970, and Roe v. Wade made her aware that it had not been a universal right.

By the time she got her medical degree, Imershein knew she would be politically active.

“It’s appropriate for anyone going into OB-GYN to be into reproductive rights,” she said. “You don’t hear people going ‘I’m fighting for the right to have your appendix out,’ but somehow it seems necessary to fight for women’s right to control themselves and their families.”

She was always aware that Jewish religious precepts favored the life and welfare of the mother, but in time she delved deeper, learning with a rabbi. (What the welfare of a mother means varies among streams of Judaism, but even the strictest Jewish application is more liberal than some of the bans now in place in a number of U.S. states.)

“Somewhere along the line, I learned the Talmud and Genesis back up the Jewish philosophy, that it is not when someone is conceived, but it’s a matter of when someone becomes human, and that’s clearly defined by the Talmud when the head is born, or the greater part, the nefesh becomes ensouled,” she said.

“So it segued with my values as I learned more,” studying Talmud and Torah.

Imershein learned, for instance, that the testimony of Rabbi David Feldman, a Yeshiva University-ordained bioethicist, was critical in the passage of the abortion rights law in her home state of New York that she had taken for granted as a youth.

Speaking in broad New York tones and with an easygoing demeanor, she now provides “nondirectional” counseling to women seeking an abortion — a series of open-ended questions to make sure it is the patient only who is making the choice. While that may be standard in abortion clinics, Imershein she sees a correlation to Jewish teaching emphasizing the human agency in decision-making.

Her path to becoming a mohelet began in 1985 when she heard that the Reform movement was launching training that would include women. She was excited to hear about it but decided she could not make the commute to Philadelphia from Washington.

Ten years later, she was surprised to get a call from the Reform movement telling her that classes were starting in Washington. The officials had made a note of her interest and kept her name on file for a decade.

“People are trying to outlaw circumcision,” she said, apparently somewhat stunned by the idea, and rattling off data about how the practice has health benefits and does not impact sensation. (The American Academy of Pediatrics declares that the health benefits of newborn male circumcision outweigh the risks, but that the benefits “are not great enough to recommend universal newborn circumcision.”)

Imershein does not advertise in either of her roles; she operates by word of mouth and referrals to her websites. As different as the services she offers are, each site is strikingly similar: On one page, she is standing in front of the Supreme Court, wearing a lab coat, grinning and holding up a sign saying “Stop Banning Abortion.” On the other, she is wearing a tallit, grinning, and holding up a certificate of circumcision, about to hand it to a couple holding a newborn.

The clinic where she works features a play area for children — a patient accompanied by her entire family is not unusual — and inspirational posters.

“Be courageous, it is one of the only places left uncrowded,” says one, quoting Anita Roddick, the late Body Shop CEO and human rights activist. 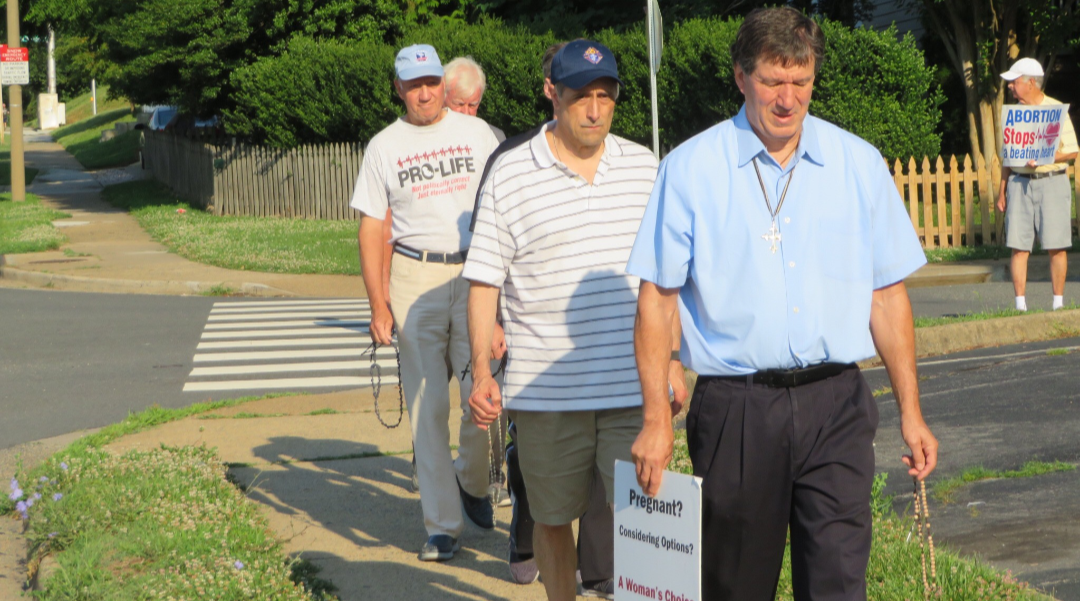 Her greatest gift, Imershein said, is the relief she sees in the eyes of patients and parents. It makes it worth the gantlet of protesters she traverses entering the drab building in suburban Virginia, where on a recent Saturday morning about a dozen people fingered rosaries while chanting “Hail Mary” and “Pray for our sinners.”

“I’m a woman of faith — I don’t try to convert them to my religion or way,” she said. “Telling me that they’re praying for me does not give me any comfort. I feel sorry for them, they’re wasting a beautiful afternoon harassing women.”