(J. The Jewish News of Northern California via JTA) — A forest fire, racing up a mountain. A tortoise, deep inside the earth. A dark sea, rough on the surface and still beneath it.

These images, carved on blocks and printed by artist Ava Sayaka Rosen, are part of a deck of cards that is simultaneously an art piece, a spiritual tool and a call to connect with nature.

“I was looking for a way to educate people about ecology, but also make that connection between taking care of the Earth and taking care of yourself, and human relationships,” Rosen said. “I felt like tarot was a good way to bridge all of those things.”

Rosen, 33, created the tarot deck as a 2021 fellow with LABA East Bay, the yearlong Jewish artists’ fellowship hosted by the JCC East Bay in Berkeley, California. It’s a project that fuses her passion for nature and text-based art with her Jewish roots.

“My Jewish upbringing, combined with my parents’ love for nature, really instilled a deep sense of belonging and connection in nature,” said Rosen, who is biracial (her mother is Japanese and her father is Ashkenazi Jewish). “And that was really the inspiration to make this deck.” 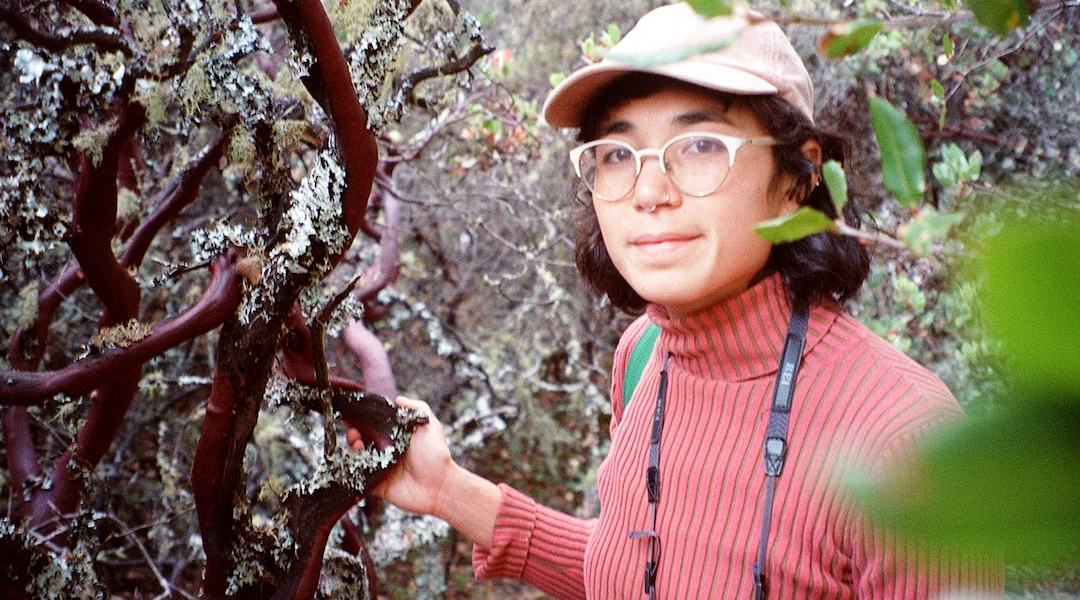 Rosen, who lives in Oakland, grew up in San Francisco and has an MFA in creative writing and book art from Mills College. Her first art job was at Congregation Emanu-El as a teen assistant in the art room, helping the art teacher. Now she’s an artist and an art teacher herself at the San Francisco synagogue — with her own Jewish high school-age assistants.

“That was my first job, and I really liked it,” she said. “And it’s just hilarious to me that I’m full circle. I’m back there as the art teacher with teen helpers.”

While her study of art was in a school setting, her background in tarot was personal.

“I was initially drawn to the imagery. I didn’t know anything about what the cards meant, or the history of it,” she said. “As I started to learn more about it, I got really into tarot reading practice as a way to investigate myself and my relationships.”

Tarot cards date back to 15th-century Italy. They were adapted for mystical purposes, including as a fortunetelling tool, in 18th-century France, and social media has brought new interest to the practice. During a tarot reading, cards with evocative images are drawn from a deck and interpreted through a particular lens. Some draw on Kabbalah in their readings; other modern Jewish artists have also blended tarot with Jewish mysticism. 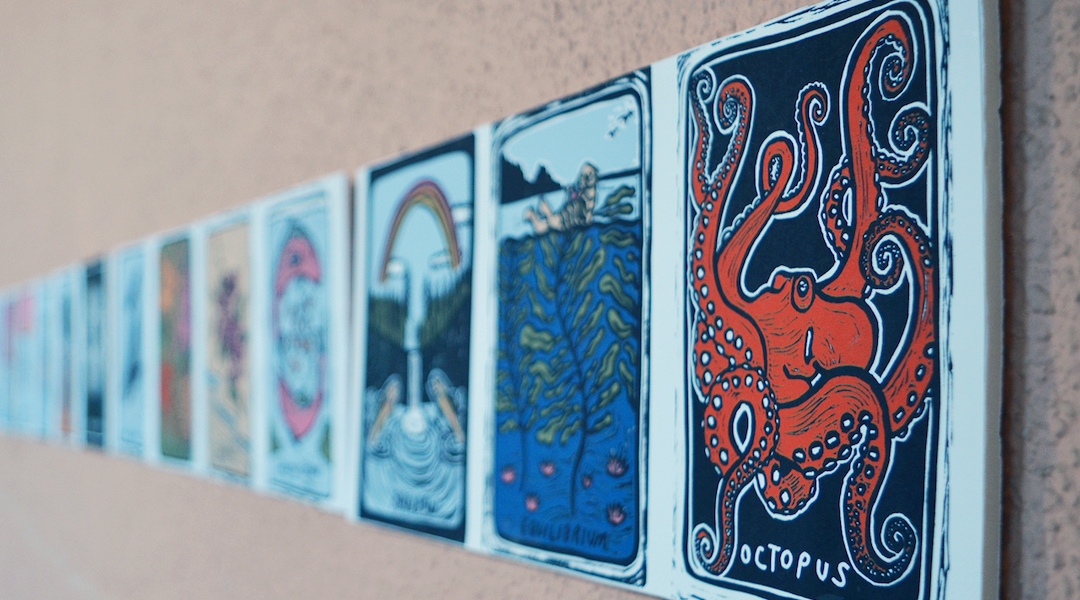 As an artist, Rosen said creating her own deck was a natural step. The deck she designed as a LABA fellow is not a particularly Jewish artwork, although it contains some Jewish texts to help deepen the understanding of each image. But the LABA fellowship allowed her to take an existing concept and develop it. It also gave her deadlines to meet.

“It’s a very ambitious project to create original concepts and carve them, print them, write them — write the descriptions for them — so I knew I was going to need some accountability help, in a major way,” she said.

Of the 78 cards that make up a tarot deck, Rosen has finished 39, mostly during the LABA fellowship. She plans to look for a publisher once the deck is completed.

“This LABA fellowship really put a fire under my butt and gave me a deadline, and I just worked really, really hard to produce about half the deck now,” she said.

Rosen started each design by pulling a card from her copy of the Rider-Waite deck, the most well-known tarot deck (first published in 1909, it is famous for its esoteric imagery and is what most people think of when they think of tarot cards). She let that be a guide for the inspiration and interpretation needed to make a version of her own.

Thinking through the traditional interpretations of each card, she would find a related nature concept and create a description with “writing prompts for self-reflection questions,” she said.

For the Moon card, which shows a glowing full moon lightly wreathed with clouds, the questions included: What do you know? What are you being pulled towards? The guide for the Compost card, which shows bright mushrooms sprouting from a log, has a well-known section from Genesis: “For dust you are, And to dust you shall return.”

“Working with other Jewish artists really opened up my ideas about what Jewish art is,” Rosen said.

She called the project “TARO::TORA” after two images from the traditional Rider-Waite deck, illustrated by Pamela Colman Smith. “The connection between tarot and Torah, which the title references, is mysterious but very much present within the traditional archetypes of the cards,” she said.

Rosen was able to see the power of “TARO::TORA” in person at a live LABA event on Nov. 7 at the JCC East Bay. Her corner, where she did readings with her deck, was more popular than she expected.

“I didn’t think that a big line would form,” Rosen said with a laugh.

Musician David Israel Katz was one of those who got a reading. He said he was drawn to the project for the way it combined “the visual language of liberty and playfulness on the one hand, and of aesthetic cohesion and deep inquiry on the other hand.” 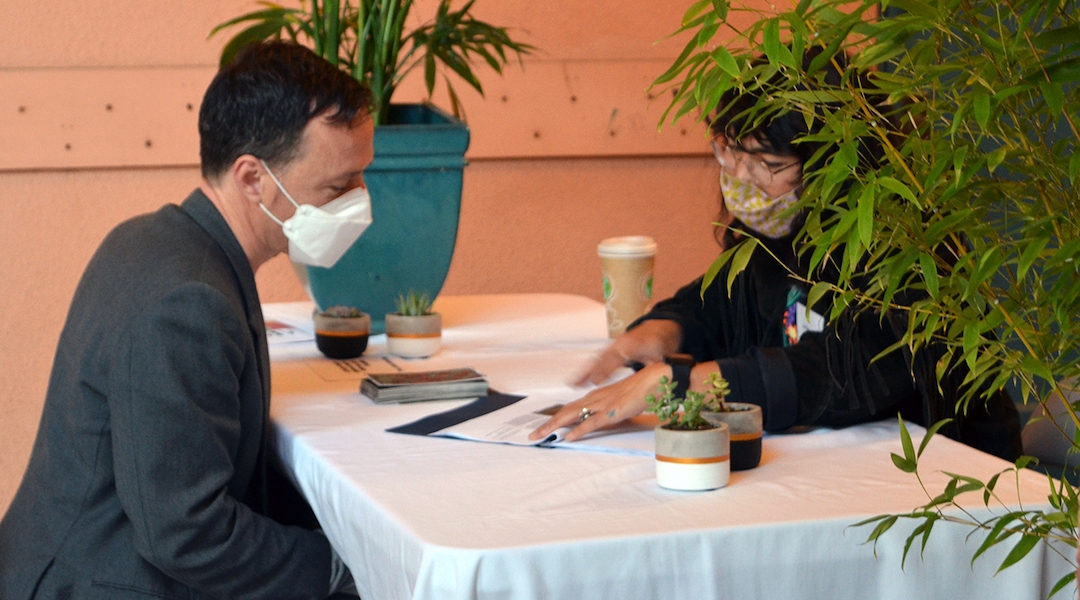 “As minimal as the reading was in its outward format, it was intimately illuminating inwardly,” he told J. in an email. “The card I drew spoke to me immediately, and Ava was able to describe accurately and concisely the different facets contained in the image.”

Sarah Wolfman-Robichaud, director of public programs at the JCC East Bay, said the JCC was eager to have Rosen in the fellowship not only because of her talent and her connections in the art and Jewish worlds, but also because of her experience teaching children. The JCC has plans to expand on LABA by bringing artists into the preschool and afterschool programs, and Wolfman-Robichaud said Rosen was an obvious choice for that, as well.

For Rosen, LABA was a unique opportunity for her to participate in a group with others like herself: Jewish artists who together could explore the concepts of Jewishness, art and Jewish art.

“The text study paired with art making was really appealing to me, and felt unique,” she said. “It really allowed us to have deep conversations around these ideas and really form community.”

This story originally appeared in J. The Jewish News of Northern California and is republished with permission.