This Holocaust survivor in Belarus was fined for flying a symbolic protest flag. She’s not backing down.

(JTA) — An 87-year-old Holocaust survivor in Belarus was convicted of an “unauthorized mass action” and fined nearly a month’s worth of her pension income for displaying on her balcony the country’s former red and white flag, which has become a symbol of the protest movement against the nation’s authoritarian president, Alexander Lukashenko.

Elizaveta Yakovlevna Bursova, who survived the Holocaust by hiding in the Ural Mountains and went on to become a sharpshooter for the Belarusian military, defended herself Monday in a Minsk court, saying she “didn’t know [the flag] was banned.”

It’s not at the moment, but some legislators are looking to outlaw it.

“The president walked under this flag for two years,” she said, referencing the fact that it was the country’s official flag early in Lukashenko’s tenure, which began in 1994.

The flag, which has two white stripes and one red one, is packed with history and symbolism. It was flown by the short-lived Belarusian People’s Republic, which was overthrown by the Bolsheviks during the Russian revolution in 1918. Critics have tried to connect the flag to Nazism because Belarusian Nazi collaborators during World War II wore it on their arms.

Its supporters say the flag never had fascist connotations and see it as a symbol of resistance to oppression and Soviet influence.

Lukashenko, who is widely considered “Europe’s last dictator,” ignited an ongoing protest movement after claiming he was elected to a sixth term in May in a vote that international watchdogs say was rigged.

“Lukashenko’s regime has trampled on the most basic human freedoms, destroyed the foundations of humanity and the rule of law in the country,” Bursova told the Jewish Telegraphic Agency through her nephew Ales Bely. “Even for an elderly person like me, it is impossible to stay away from these protests, to pretend that it does not concern me.”

Bursova was fined 405 rubles, or approximately $160. Her pension is reportedly around 600 rubles per month.

Bely, 52, has tried to bring awareness to the story outside of Belarus.

“Belarus remains largely isolated from the rest of the world, especially during the pandemic,” he wrote in a Facebook message. “It is very important to bring public attention to the stories of ordinary people … In the long run, this will help us to bring the situation back to normality.” 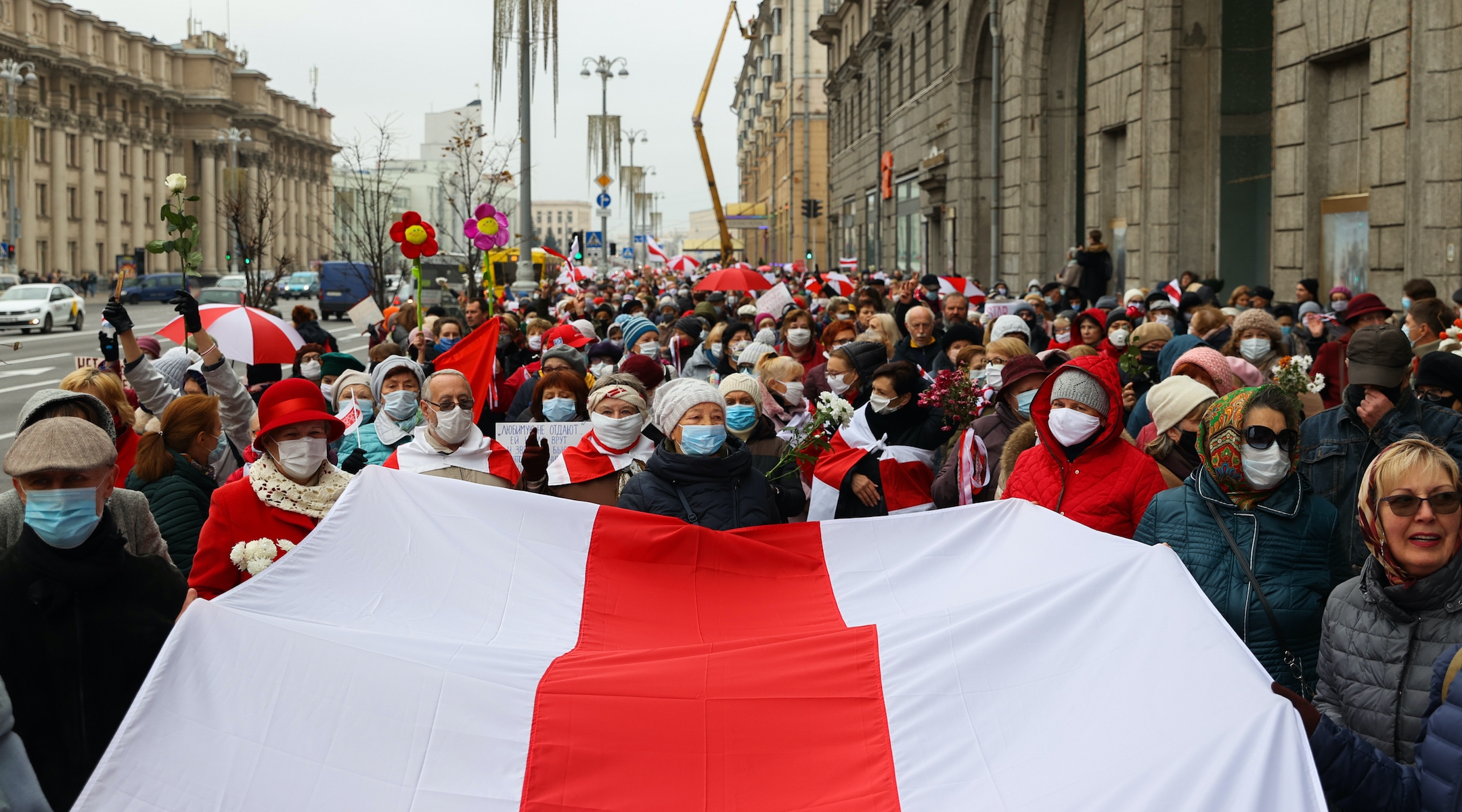 The flag was forbidden by the Soviet Union following the Nazi invasion of Poland and annexation of modern-day West Belarus in 1939. However, the occupying Nazi administration featured the flag on the arm patches of Belarusian volunteers in the German Wehrmacht.

The flag’s creator, Klawdziy Stsyapanavich Duzh-Dushewski, refused to cooperate with the Nazis, choosing instead to hide a Jewish family in his house, for which he was sent to the Pravieniskes death camp. Following the war, it became a symbol for the Belarusian diaspora and opponents of the Soviet government in Belarus.

By the 1980s, the flag featured prominently in democratic movements within Soviet Belarus. Following the collapse of the Soviet Union, the Belarusian Popular Front put forth a proposal to make it the official flag when Belarus became an independent country in 1991.

Lukashenko upon assuming office in ’94 backed a referendum that changed the national flag. Since then, the former flag has remained a symbol of opposition to Lukashenko, most recently during the election protests.

Bursova fled Nazi Germany’s occupation of Belarus with her mother and grandmother, leaving Vitebsk on the last evacuation train in July 1941. She spent the remainder of the war in the Urals and Bashkortostan in Russia. Sixteen of Bursova’s relatives were killed in the Vitebsk and Biesankovicy ghettos. Another three were lost as soldiers in the Red Army.

Despite her hardships, Bursova returned to Belarus after the war and made a life for herself. A reporter asked her after Monday’s trial if she ever planned to leave for Israel.

“No, I love Belarus very much,” she said.

“In the 1950s, she was a multi-champion and record holder of the [Byelorussian Soviet Socialist Republic] and the Belarusian Military District in bullseye shooting and a record holder [in] the USSR,” Bely told reporters. “She defended the honor of Belarus at all union and international competitions when Lukashenko was not even born.”

Bursova told JTA that she often attends protests and marches with her fellow pensioners.

Will she obey the court’s implicit ban on the flag? Bursova is uncertain.

“It is difficult to say what ordinary people like myself, not the bravest heroes, will do with the public display of the flag if the level of repression against it is so high,” she said. “For me, the symbolism of the flag is perhaps somewhat less important and acute than for the younger generation, but I accept it as a symbol that unites the whole society in the rejection of lies and violence.

“If everyone accepts other symbols of resistance, most likely I will support them as well. Unity is the most important thing here.”