RIO DE JANEIRO (JTA) — Last month, at the Pan American Games in Medellin, Colombia, spectators, journalists and the event’s organizers lined up with anticipation along the side of a pool to watch a 400-meter medley. They were there to see Nora Tausz Ronai, who would finish the race — which involves breaststroke, backstroke, butterfly and freestyle — despite the fact that she is 98 years old.

After getting out of the pool, Tausz Ronai was showered with a full minute of applause. When medical staff offered her a wheelchair, she waved it away, El Colombiano reported.

“When I’m in the pool, I feel like I’m resting — obviously not physically, but morally. The pool saves me from many oppressive situations,” Tausz Ronai told JTA. “Some situations are maddening. If you swim, you don’t cry. It’s like being brainwashed from the inside.”

In addition to her achievements in the pool, all earned since she started swimming competitively at age 69 — which include breaking several national and regional records for her age groups at Brazilian, South American and Pan American Games — Tausz Ronai’s story of Holocaust perseverance has added to her local legend and inspired legions of Brazilian athletes, young and old. 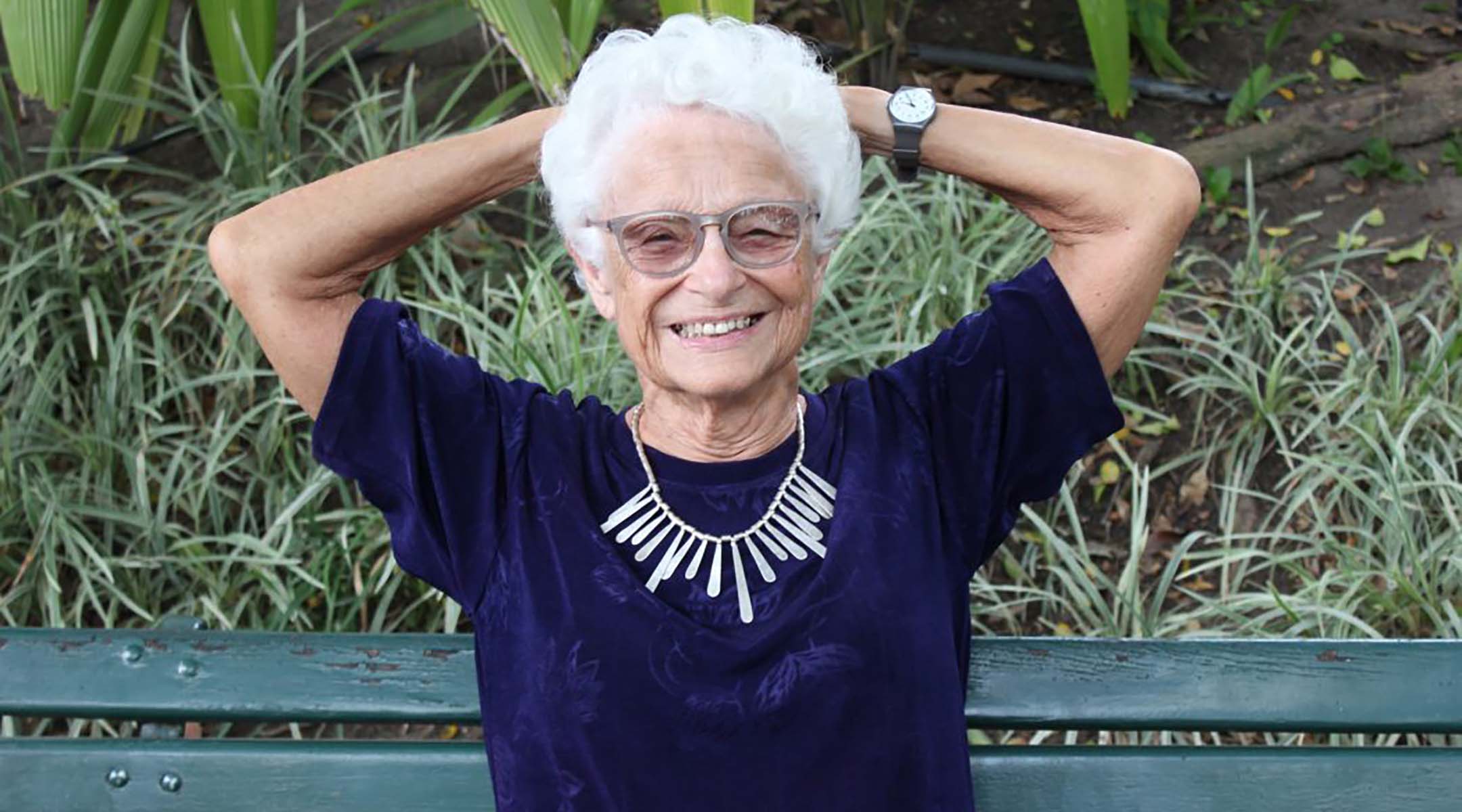 “She suffered so many losses just because she was Jewish, overcame the difficulties and moved on. As in swimming, the challenge is consistency and determination,” Cinthia Griner, a 61-year-old Jewish athlete who recently won the “Queen of the Sea” title for swimming Rio’s entire Copacabana beach, told JTA. “It is very emotional to see how she is celebrated and admired by the other swimmers, who line up for a photo with her.”

Born Nora Tausz in 1924, in what was then the Italian town of Fiume — and what is today Rjeka, Croatia — her grandfather was a traditional and observant Jew. But her father, who married a Jewish woman, ended up getting baptized and converted to Catholicism as part of a family feud — involving some small amphibians. That was before Tausz Ronai was born, leaving her “technically Catholic.”

“My father’s dislike for religion started during his childhood. When he was preparing for his bar mitzvah, the rabbi complained that he did not study enough. My grandma was furious and threw the salamanders he carefully collected out of the window and the cats ate them,” Tausz Ronai explained.

After Nora’s birth, Edoardo Tausz became the president of a Hungarian insurance agency. But in 1935, the Hungarian government issued a law by which non-citizens could no longer work in high-ranking positions. The company offered him a chance at Hungarian citizenship, but he rejected the move as opportunistic, quit his job and joined an Italian insurance company.

In 1938, the promulgation of racial laws in Italy stripped Jews of their citizenship. Tausz lost his job overnight with no compensation, his pension savings account was seized, and his kids Nora and Giorgio were thrown out of school.

“There was nothing to do. The government said that we were of ‘Jewish race.’ We were not connected with the official Jewish community. When my grandfather died, no one could afford his Jewish burial. Even my cousin, who was very Catholic and attended the Benedictine school, was kicked out overnight by the priest. He ended up in Auschwitz,” Tausz Ronai said in an interview with the Primo Levi Center in 2020. 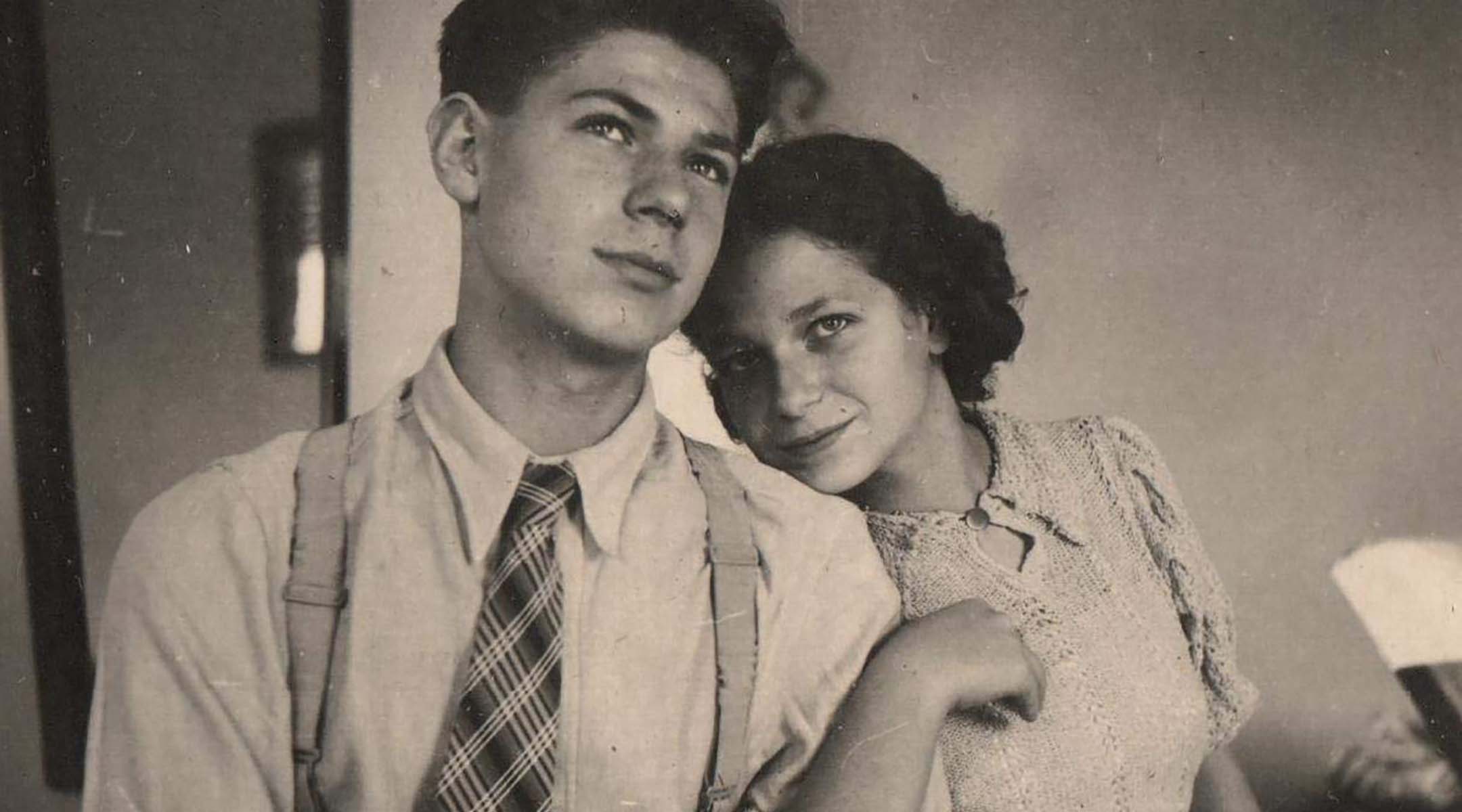 Tausz Ronai poses with her brother Giorgio in Fiume, Italy, 1939. (Courtesy of the Ronai family)

Lacking nationality and resources, Edoardo Tausz prepared his family to leave, reaching out to several countries, including Australia, Argentina and the United States. He even found a New York telephone book and called various Tausz families for help, but never received an answer.

After Italy entered the war, in the summer of 1940, the mayor ordered the round-up of all the Jewish men in Fiume.

“They came before dawn, perhaps 4 a.m., about six men in uniform with bayonets and revolvers in their hands. They took my father and went for my brother. My mother begged for Giorgio as he was ‘just a child,’ although he was actually 18. [The soldiers] gave up and left [Giorgio] behind,” Tausz Ronai recalled.

Giorgio was eventually caught at a train station while trying to escape. Though “technically Catholic,” his papers carried the word “Jew,” so he was taken to the Torretta detention camp, where his father was also imprisoned.

“At least we knew where they were. All we could do was to bring them some food. I suppose in Germany we would have been worse off,” Tausz Ronai said.

The Germans soon began to take Jewish women and children. Tausz Ronai and her mother appealed to an old school friend of Edoardo Tausz’s, a Catholic minister named Nino Host Venturi. He intervened to free the Tausz men after they had been in the camp for two months. Shortly after, all of the Jews held in Torretta were taken to a rice factory in Trieste and killed.

Edoardo Tausz’s conversion to Catholicism was not enough to waive him and his family from antisemitism, but it became the reason why they survived.

“The Vatican had made 3,000 visas for Brazil available to Jewish converts, which was our case. The visas were very expensive, though. My aunt Valeria, who worked for the Vatican exchanging dollars on the black market, managed to arrange our visas through her contacts. That saved us,” Tausz Ronai said. 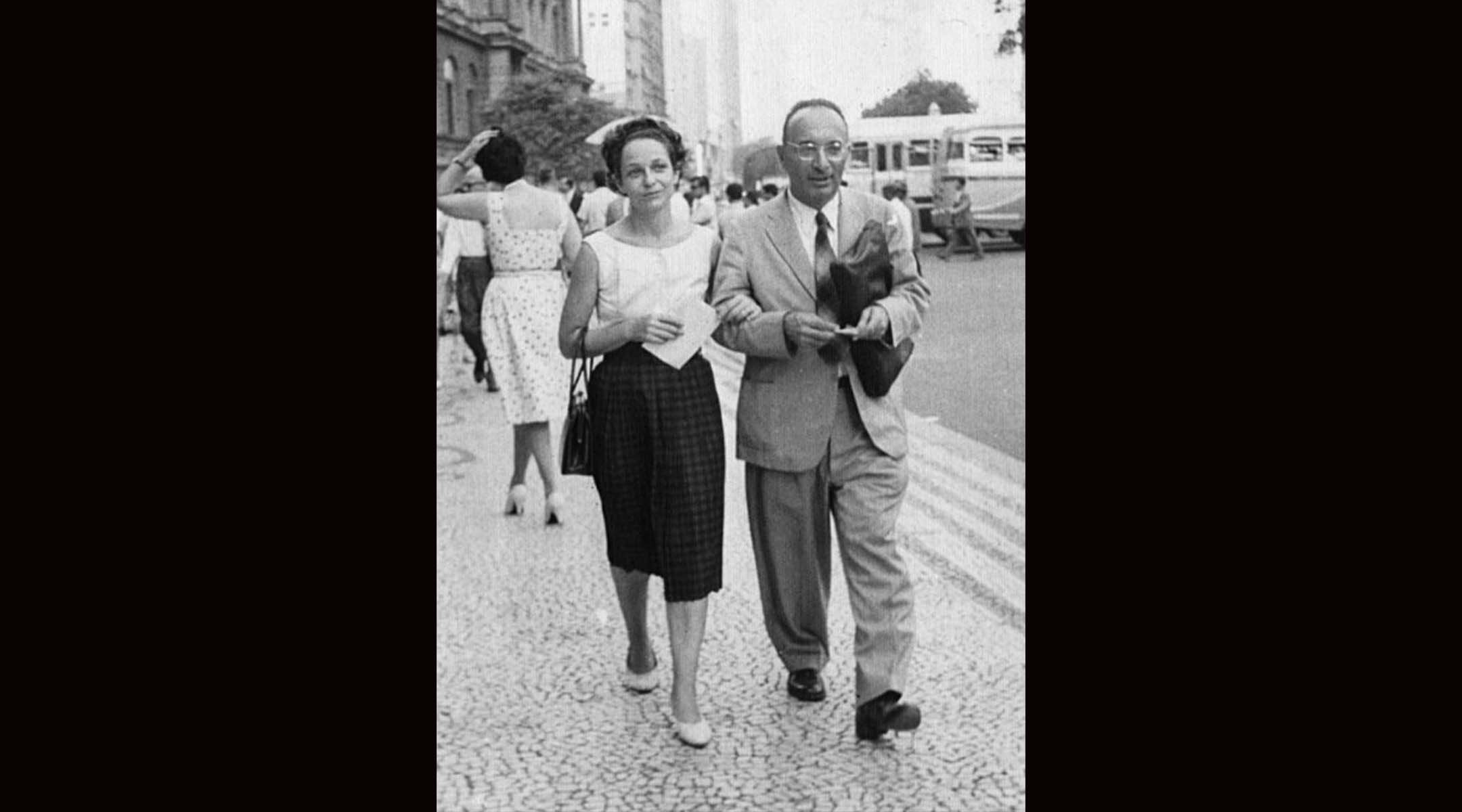 Nora and Paulo Ronai walk in downtown Rio de Janeiro in 1950. (Courtesy of the Ronai family)

In 1941, the Tausz family arrived in Rio de Janeiro, where 17-year-old Tausz Ronai’s aversion to religiosity grew stronger. However, perhaps unconsciously, her Jewish roots have continued to permeate aspects of her life since then.

In high school, she didn’t bond with anyone except a classmate named Elias Lipner, a religious Jew who had a crush on her.

“He was an island of culture, the only one I could talk to. However, from the religious standpoint, a life together would not be possible. I would not light Shabbat candles. I would not kosher my house. I would not circumcise my sons,” said Tausz Ronai.

Her best friend, Judith Grunfeld, who was also Jewish, introduced her to Paulo Ronai, the Hungarian Jew she would marry in 1952 and spend 40 years with, until his death at 85 in 1992.

The couple were both atheists and spoke Hungarian to one another, the language that Tausz Ronai became fluent in after living for four years in Budapest during her childhood.

“I needed to exchange ideas and eventually convince my partner with arguments. Elias’ argument was tradition. I didn’t need Judaism at all. Paulo thought just like me,” explained Tausz Ronai, stressing that they had a civil wedding with no huppah.

Tausz Ronai — ​​who is fluent in Italian, Fiumano (a dialect of Venetian), Hungarian, German, French, English and Portuguese — would become an accomplished architect and write three books, including one on her life story and another for children. Paulo Ronai was an acclaimed translator, philologist and critic. Born in Budapest, he was sent to a labor camp in 1940, where he remained for six months, before obtaining a visa and migrating to Brazil in 1941. He saved his mother, sisters and brothers-in-law, but his first wife Magda was murdered by the Nazis on the banks of the Danube.

Nora and Paulo Ronai raised their Brazilian-born daughters Cora and Laura as atheists and marked national holidays such as Christmas and Easter, from a cultural standpoint. But many of Laura and Cora Ronai’s descendants are being educated as Jews. Some have been to Israel on Birthright trips and attend Jewish summer camps.

“My mom is a true Jewish mother, even if she doesn’t consider herself as such,” said Laura Ronai, whose grandchildren attend a Brazilian Jewish school.

Cora Ronai, who is a renowned columnist in Rio’s largest newspaper O Globo, has traveled the world through her work, but will make it to Israel for the first time for her grandson’s bar mitzvah in December.

“It’s a mixture of curiosity and expectation. There is this feeling that I’m finally going to visit relatives, my family,” she told JTA. “Rituals are the point where past generations and generations yet to come meet. I see Fabio’s bar mitzvah as a pact he will make with his ancestors, a commitment to honor them.”

In March, the journalist was invited to talk to her grandchildren and colleagues at a Jewish ORT school, where she talked about her career and her family’s Jewish roots, as well as her mother’s swimming accomplishments.

“Whenever I happen to find myself in a predominantly Jewish environment, everything looks so familiar to me — from the food to the people and the conversations,” Cora Ronai added. 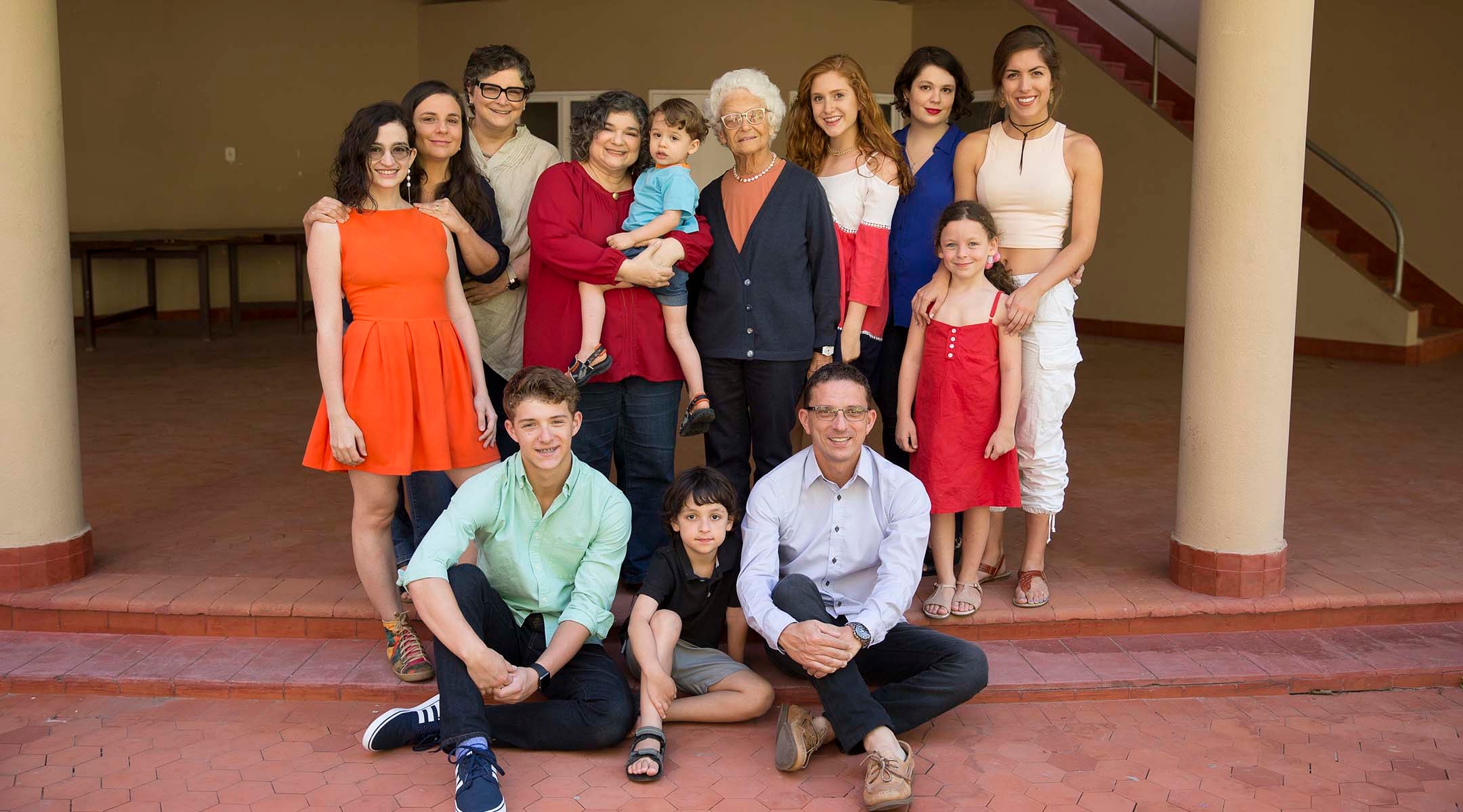 Tausz Ronai stands at the center of a family photo in 2016. (Leo Aversa)

Rituals aside, the family has always supported Jewish causes.

“When the Israeli athletes were killed during the 1972 Summer Olympics in Munich, I took some of my most important medals and sent them to the Israeli embassy to make them reach the mourning families,” said Tausz Ronai, who also planted several trees in Israel via the Jewish National Fund to memorialize her loved ones. “Every time I can, I defend Israel.”

She was engaged with sports from an early age, as both of her parents were athletes in Italy — her father was a rower and fencer, and her mother played tennis — and she became a fan of skiing and fencing. When she arrived in Brazil, Tausz Ronai began dedicating herself to diving and swimming, which she did in parallel to her career as an architect and university professor.

Tausz Ronai only started to compete in 1993, at 69, after the death of her husband. Since then, she has won 13 gold medals and broke 12 world records at Masters World Championships, international competition for athletes over the age of 35. In the 2014 Masters Swimming World Championship in Montreal, Nora Ronai swam the 200-meter butterfly in under nine minutes to set a world record — because she became the oldest swimmer to ever complete the event.

“Winners don’t give up, they are always looking for the next dream, the next challenge, which keeps them very alive. For us Jews in particular, living and resisting is essential,” Filler Amorim said.

Tausz Ronai best summarized how her Jewishness endured inside her.

“My most Jewish trace is to ask questions, to think, to distinguish between the right and the wrong based on ethics. I was lucky. I endured. I survived,” she said.

—
The post This Holocaust survivor and Brazilian swimming champion is still competing at 98 appeared first on Jewish Telegraphic Agency.