This Chicago synagogue is a home for non-Zionist Jews

CHICAGO (JTA) — If a pro-Israel activist were to conjure an image of an anti-Zionist synagogue, they’d probably come up with something like Tzedek Chicago.

A congregation of 180 people that meets in a church basement, Tzedek Chicago’s “Core Values” declare that it’s non-Zionist. In practice, though, that means an explicit emphasis on advocating for Palestinian rights and criticizing Israel’s conduct. Those themes were woven throughout its service last Yom Kippur — from the rabbi’s sermon to the Torah service to the liturgy itself.

Discussing the biblical story of Jacob and Esau, a speaker said that Esau, the scorned older brother, experienced a “personal Nakba,” the name Palestinians use for the catastrophe they commemorate on the anniversary of Israel’s independence. The sermon was about a recent trip to Gaza. For the martyrology, a section of the service that traditionally commemorates Jews who died for their faith, the synagogue instead memorialized Gazans who died in clashes with Israel on the border.

And in addition to atoning for personal misdeeds, the congregants collectively beat their chests to repent for Israel’s actions.

Even as they disagree over whether God exists or where the Torah comes from, synagogues across the country of all denominations take supporting Israel as a matter of course. Many recite prayers for the state and its army. It’s standard to see Israeli and American flags flanking the front of synagogue sanctuaries. AIPAC, the pro-Israel lobby, welcomes hundreds of synagogue delegations to its annual conference.

Tzedek Chicago was born of a desire to escape all of that. But the synagogue doesn’t disengage from Israeli-Palestinian discourse. It goes in the opposite direction. There are no flags at the front of the sanctuary, and instead of celebrating Israeli Independence Day, they commemorate Nakba Day.

“There were no places for Jews — we believe there are a significant number of them — who either were not Zionist or were engaged actively in Palestinian solidarity work and really wanted their social justice identity to be expressed through the life of the congregation,” Tzedek Chicago Rabbi Brant Rosen said. “We state specifically that one of our values is we do not celebrate the fusion of Jewish tradition and political nationalism.”

Rosen, 56, once was a liberal Zionist serving as rabbi of the Jewish Reconstructionist Congregation in suburban Chicago. He’s also the past president of the Reconstructionist Rabbinical Association. But successive trips to Israel and Palestinian areas, especially surrounding Israeli wars in Gaza, led him to affiliate with Jewish Voice for Peace, which advocates a boycott of Israel and identifies as anti-Zionist. Rosen is the co-founder of JVP’s rabbinical council.

After the 2014 war in Gaza, Rosen says “it became impossible for me to do my work anymore,” and he resigned from his former synagogue. He and a group of former congregants founded Tzedek Chicago the next year. Rosen says it’s loosely affiliated with JVP.

During the week, Rosen is the Midwest Regional director for the American Friends Service Committee, a Quaker organization that also advocates for Palestinian rights.

“Being in a space where organizing for an end to human rights abuses against Palestinians feels like a natural extension of organizing around social justice more broadly as opposed to this thing that gets siloed off … it’s very liberating,” said Michael Deheeger, a founding member of Tzedek Chicago who worked as an organizer with JVP. “It’s just in line with all the other actions going on.”

Although Rosen split from his Reconstructionist synagogue, he remains “an active and valued member” of the movement, according to Rabbi Elyse Wechterman, the executive director of the Reconstructionist Rabbinical Association. The movement has traditionally been progressive Zionist, but is also “a big tent and [has] members with a variety of viewpoints and positions on these issues,” she wrote in an email. Another prominent co-founder of JVP’s Rabbinical Council, Rabbi Alissa Wise, also is Reconstructionist.

A decade of right-wing government, religious divides and a moribund peace process have cooled what was once a passionate love affair between Israel and American synagogue-goers.

“Although a vast majority of them still care about Israel, there is now much more ambivalence toward it and much less agreement about its politics,” wrote Dov Waxman, a professor of political science, international affairs and Israel studies at Northeastern University. Among younger Jews, that ambivalence is even more pronounced. 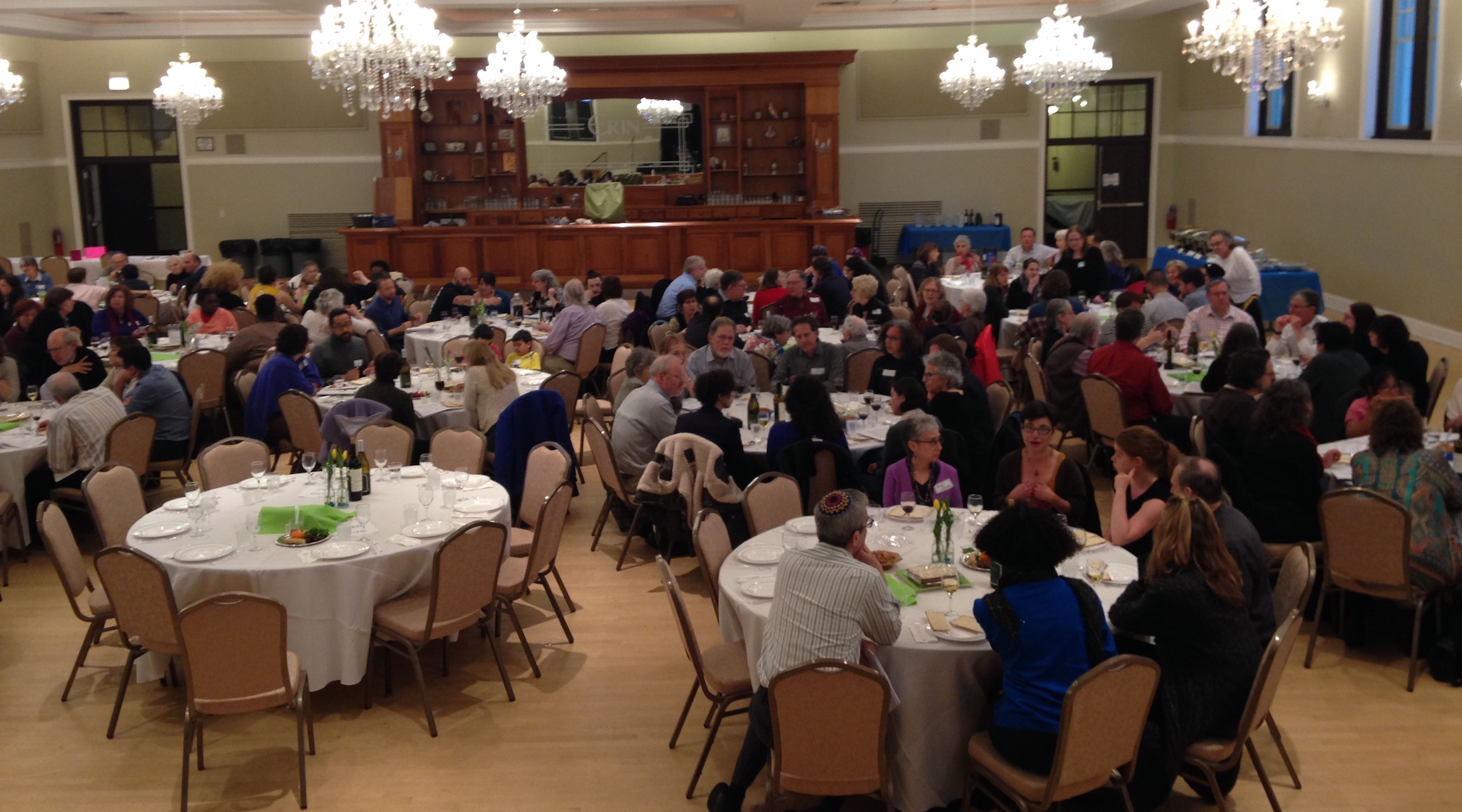 Even so, the non-Zionism and pro-Palestinian activism of JVP and Tzedek make them outliers among Jews. A survey this month by the American Jewish Committee found that 62 percent of American Jews  agree “strongly” or “somewhat” that caring about Israel is a “very important part of my being a Jew,” while only 15 percent and 18 percent “disagree strongly.”

Tzedek has collaborated with other Jewish groups in the area beyond JVP. But it is not listed in the local federation’s directory of Chicago synagogues. The federation, called the Jewish United Fund, does not fund groups that advocate a boycott of Israel.

For Tzedek Chicago, being non-Zionist extends beyond political advocacy. Rosen says the synagogue aims for Diasporaism, where the congregation immerses itself in local culture rather than Israeli culture, which he calls a “Western colonial culture.”

Rosen says he still has a “deep-seated connection to Israel,” and acknowledges that the Land of Israel is a major motif in Jewish history, sacred texts and prayer. But he says the congregation downplays it now because he believes the land has become inextricably connected to the State of Israel.

So on the Jewish harvest festival of Sukkot, instead of the traditional rituals with four plant species grown in Israel, the synagogue gathered leaves from oak, sumac and willow trees, along with an Osage orange. Rosen notes the four plants are indigenous to the Chicago area.

“Israeli culture is 100-plus years old,” he said. “It’s an invented culture, really, and I don’t deny that is a robust and sophisticated culture in its own right. If we’re really going to celebrate Jewish culture, we should celebrate the varieties of Jewish culture, and the one that’s being created in the Diaspora community in which we live.”

Pro-Palestinian activism isn’t the sole focus of Tzedek Chicago. The congregation will host a “Promoting Immigrant Justice” session on the upcoming Jewish holiday of Shavuot. Its core values include nonviolence, spiritual freedom and equity. And before atoning for what they see as Israeli sins, the Yom Kippur worshippers also listed American militarism and mistreatment of minorities and immigrants.

“How do you set up what’s called a tent of meeting?” asked Caryn Chaden, Tzedek Chicago’s president, describing the experimental nature of the 4-year-old synagogue. “How do you solve this? How do you solve that? We’ve had long discussions of what it means to be a member at Tzedek.”

Much of being a Tzedek Chicago member has nothing to do with activism. Deheeger enjoys the programming for young families. Chaden loves the congregational singing. And Rosen says that because so many of the worshippers work for activist groups, he tries to create a space apart from that work during prayers.

But for some members, non-Zionism is an inherent part of that rejuvenation. Uncomfortable in nearly every other synagogue they’ve encountered, they say they finally feel at home.

“It felt like an LGBTQ person coming out of the closet,” said Lesley Williams, a JVP member who belongs to Tzedek Chicago. “We were able to say who we are without being judged or ostracized or kicked out of the Jewish community.”