AMSTERDAM (JTA) — Anywhere else in Europe, a muscular cartoon character named Max the Matzah would have amounted to little more than an inside Jewish joke.

But in the Netherlands, where matzah for many non-Jews is a household item year-round, Max became an unlikely hit with the general population. Since his creation about 15 years ago as the unofficial mascot of the Children’s Museum of Amsterdam’s Jewish Cultural Quarter, Max has proven popular beyond the country’s 40,000 Jews.

Max is a frog-eyed figure whose head, rising straight from the waist of a pair of green trousers, is a round matzah. His beefy bear arms wouldn’t look out of place on a Marvel superhero. 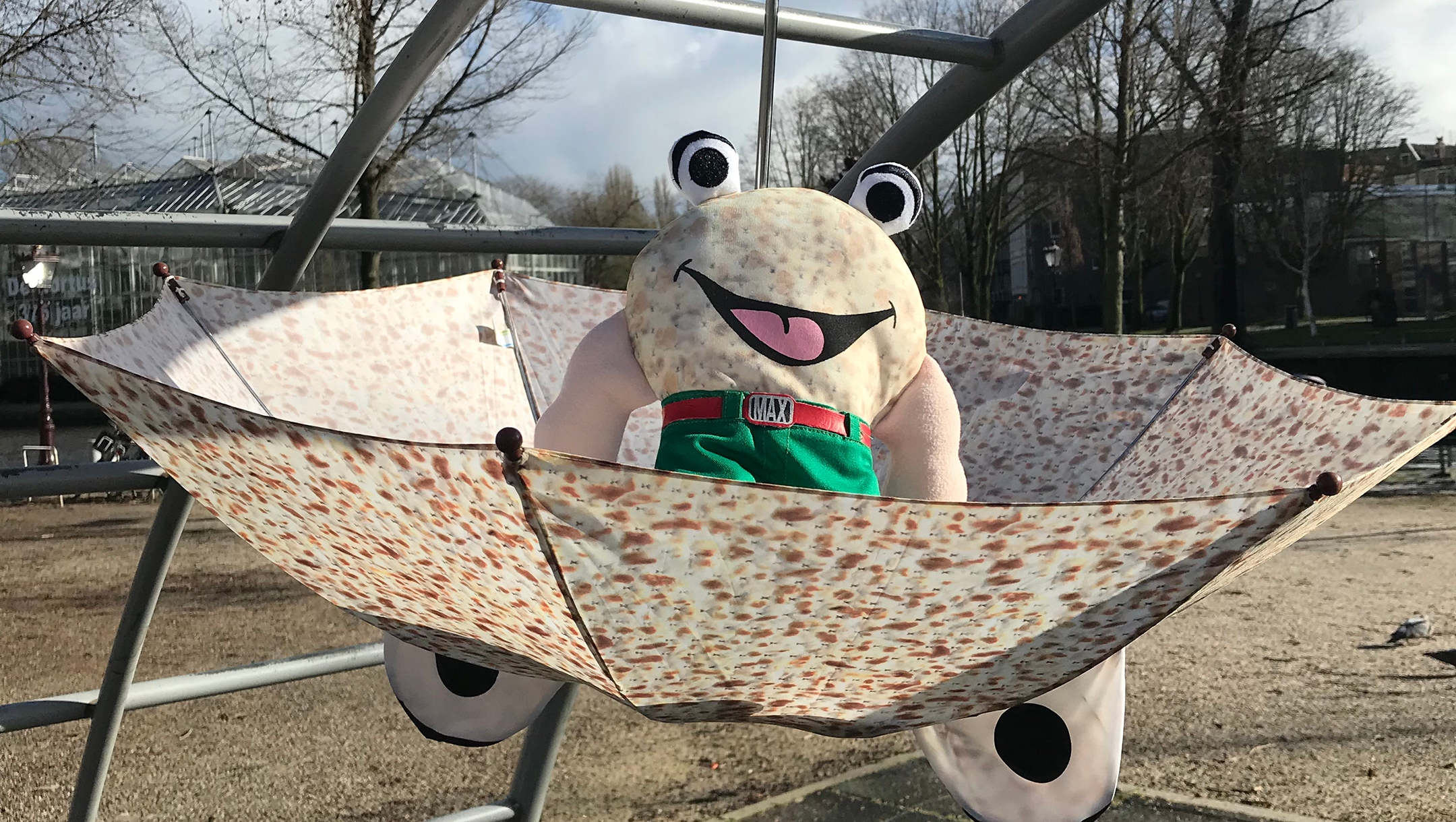 A puppet of Max the Matzah inside an umbrella near the Portuguese Synagogue of Amsterdam. (Courtesy of JCK)

He was born in the early 2000s as a drawing designed by the Israeli artist Ram Katzir and Petra Katzenstein, the manager of the Jewish children’s museum, which is the only one of its kind in Europe.

Since then, Max has been made into thousands of puppets by the museum. He stars and acts as a guide in the animated films accompanying the displays at the children’s museum, which receive about 20,000 visitors each year.

He has been featured on taxi cabs as part of the museum’s advertising campaign and on tens of thousands of boxes of Hollandia, the matzah factory in the Netherlands located in the eastern city of Enschede. (It is largely thanks to that factory, which used to be owned by Jews, that matzah, unleavened bread that Jews consume on Passover to commemorate their ancestors’ hurried flight from Egypt, became so popular here.) 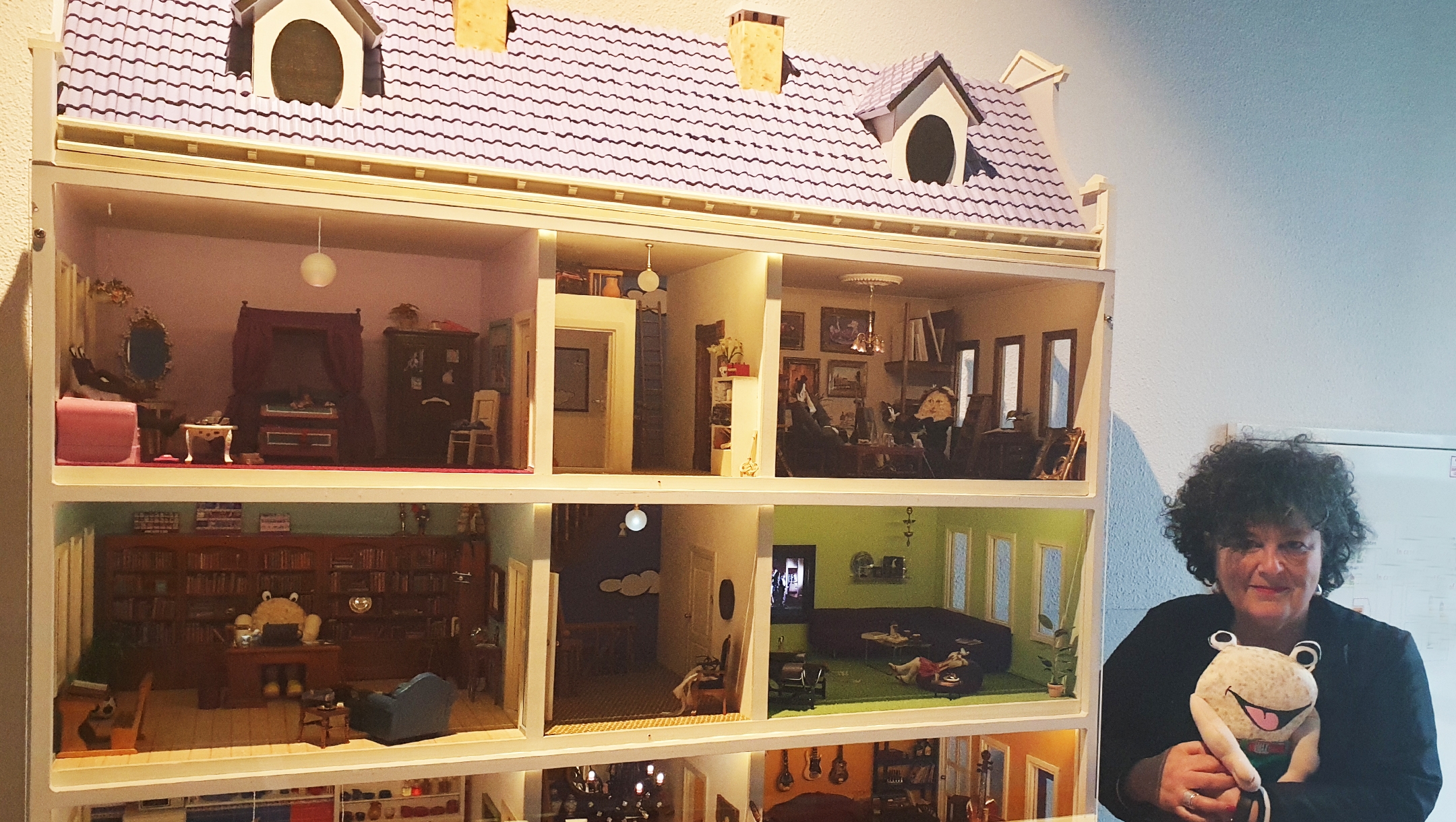 In 2010, Max received his own comic book, published by the museum and currently available in children’s libraries across the country.

On the 10th anniversary of the children’s museum, in 2017, Max made appearances with the Netherlands’ best-known host of a children’s television show, Siemon de Jong. The museum also made a Max rap video that year, cementing the cartoon’s status as Dutch Jewry’s undisputed ambassador to children.

Max would not have resonated with large numbers of children anywhere else in Europe, according to Katzenstein.

“If you don’t know what a matzah is, then you just don’t get it,” she said. In the Netherlands, however, “on Easter, everyone eats matzah, even though they don’t really know what matzah means for us Jews.”

Katzenstein said this makes matzah – and Max – a good place to start teaching about the Jewish tradition and history. Which is why Max has an elaborate backstory.

He lives in a dollhouse in the attic of a Dutch Jewish family called the Hollanders with other members of his multicultural family of pastries, including one chocolate chip variety. Max is related to Benny the Bagel, Ayalah the Challah and Gita the Pita, among others.

The family’s story, told in animated videos at the museum, “actually tells the story of the Jewish Diaspora,” Katzenstein said.

Not surprisingly, Max is a smashing success with Jewish families here, many of which have the puppets at home. Max features annually in the Passover display of this city’s main Jewish kindergarten, Simcha.

The parents there appreciate how Max’s own character is an attempt to approach the vulnerability of Jews throughout the ages as well as their determination, though Zionism, to limit it by returning to their ancestral home.

“He’s brittle and vulnerable on the one hand, but strong and robust on the other,” Katzenstein said. 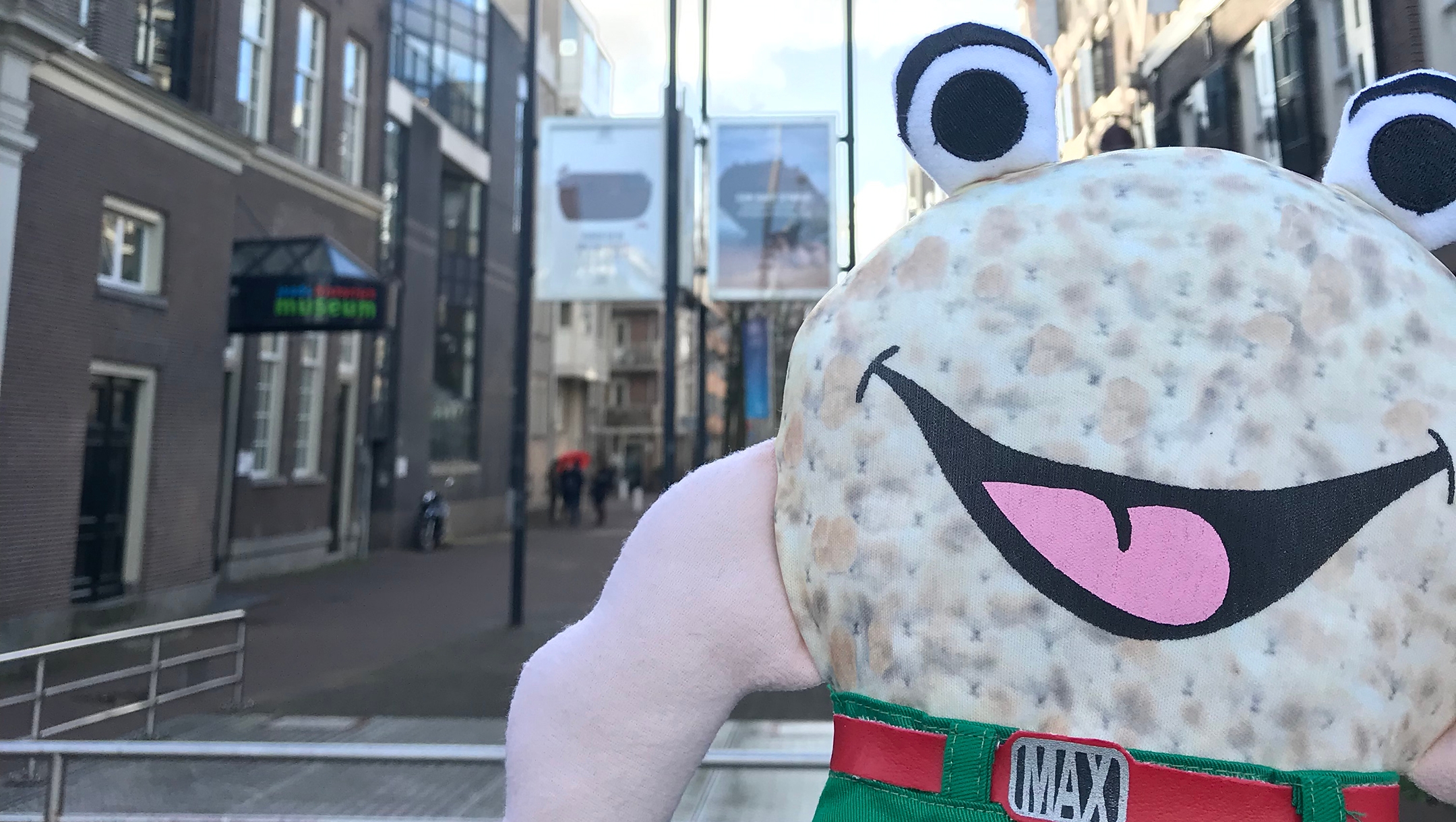 A Max puppet is seen at the entrance to the Amsterdam Jewish children’s museum. (Courtesy of JCK)

In one of the rap songs composed for Max, he sings: “Don’t want to end up in chunks, I got boxing trunks, I added some kicks and I’m now good and fit.”

The boxing reference is no coincidence.

Before the Holocaust, Jews like Max Baer, Daniel Mendoza and Samuel Elias were among the sport’s star athletes in Europe.

The Dutch author Piet Mooren, in his 2002 book “The Narrow Margins of the Multicultural Society,” wrote that Max the Matzah reminded him specifically of Ben Bril, a Dutch Jewish boxing champion who survived the Holocaust.

Max’s many layers — metaphorically speaking – have led to fans far beyond the Jewish community and the museum’s visitors.

In 2017 de Jong, who hosts the long-running children’s show “Abel’s Cakes,” appeared with Max in a billboard and matzah box campaign celebrating the museum’s 10th anniversary. De Jong, whose partner is Israeli, also hosted a matzah decoration contest at the small kitchen of the children’s museum, where visitors can make challah and matzah.

On his show, de Jong bakes a cake with a child as they discuss dilemmas in the child’s life. One guest told about his father coming out of the closet. Another was an orphan whose mother committed suicide.

“The conversations can get pretty deep,” de Jong said.

In one episode, de Jong hosted an Arab child who declined to eat from the challah they just baked because “that’s how the Jews poisoned Arafat,” de Jong recalled.

“It showed me that there is a lot of work that needs to be done,” he said.

Katzenstein said an equally shocking conversation with a child prompted her to create the museum she now runs.

She was working at the time as a guide in the main Jewish museum, which is now one of five adjacent institutions comprising Amsterdam’s Jewish Cultural Quarter. The complex receives about 380,000 visitors annually and includes the Portuguese Synagogue and the National Holocaust Museum.

“The girl was shocked to discover I was Jewish,” Katzenstein recalled. “When I asked her why, she told me, ‘I thought all the Jews had died.’”

Katzenstein’s young interlocutor wasn’t that far off. The Nazis and their collaborators killed 75 percent of the Netherlands’ 140,000 Jews – the highest death rate in Nazi-occupied Western Europe.

That meant that outside Amsterdam, “Dutch non-Jewish children no longer can visit the homes of Jewish ones,” Katzenstein said. “This is part of the reason we designed the children’s museum to resemble a Jewish home, so it would serve that purpose.”

But, she added, “we needed to find a host. And I think Max does a great job.”