BIRMINGHAM, England (JTA) — Before arriving at this British city’s university, James Harris reckoned that he was probably in store for some anti-Semitic abuse during his academic studies.

A Zionist from a traditional Jewish home in London, Harris said his university hunt in 2017 was his first foray outside the Jewish education system. And it happened to be in a year when campus anti-Semitism climbed to unprecedented heights in the United Kingdom, according to observers.

Amid anti-Semitism scandals in Labour — a party with a 68 percent approval rating on British campuses – that year kicked off with an ardent anti-Zionist, Malia Bouattia, presiding over the United Kingdom’s National Union of Students.

Her remarks about “Zionist-led media” and “Zionist strongholds” in British academia spurred Jewish groups for the first time to leave the organization in protest of what they termed anti-Semitic hate speech. In a 2017 survey of 485 Jewish students in England, two-thirds said they had been targeted on campus because of their faith.

“It was a worrying time for Jewish students across the country. I was certainly worried,” Harris said of 2017.

Then Harris visited the University of Birmingham, an institution whose vibrant Jewish community has swelled in recent years to about 1,500 members, many of whom jokingly call it a “Jewniversity.”

With campuses in London, Oxford and beyond becoming increasingly inhospitable to Jews, Birmingham’s university has seen its Jewish population soar so dramatically over the past decade that the Jewish student body now outnumbers the centuries-old Jewish community in the United Kingdom’s second largest city. 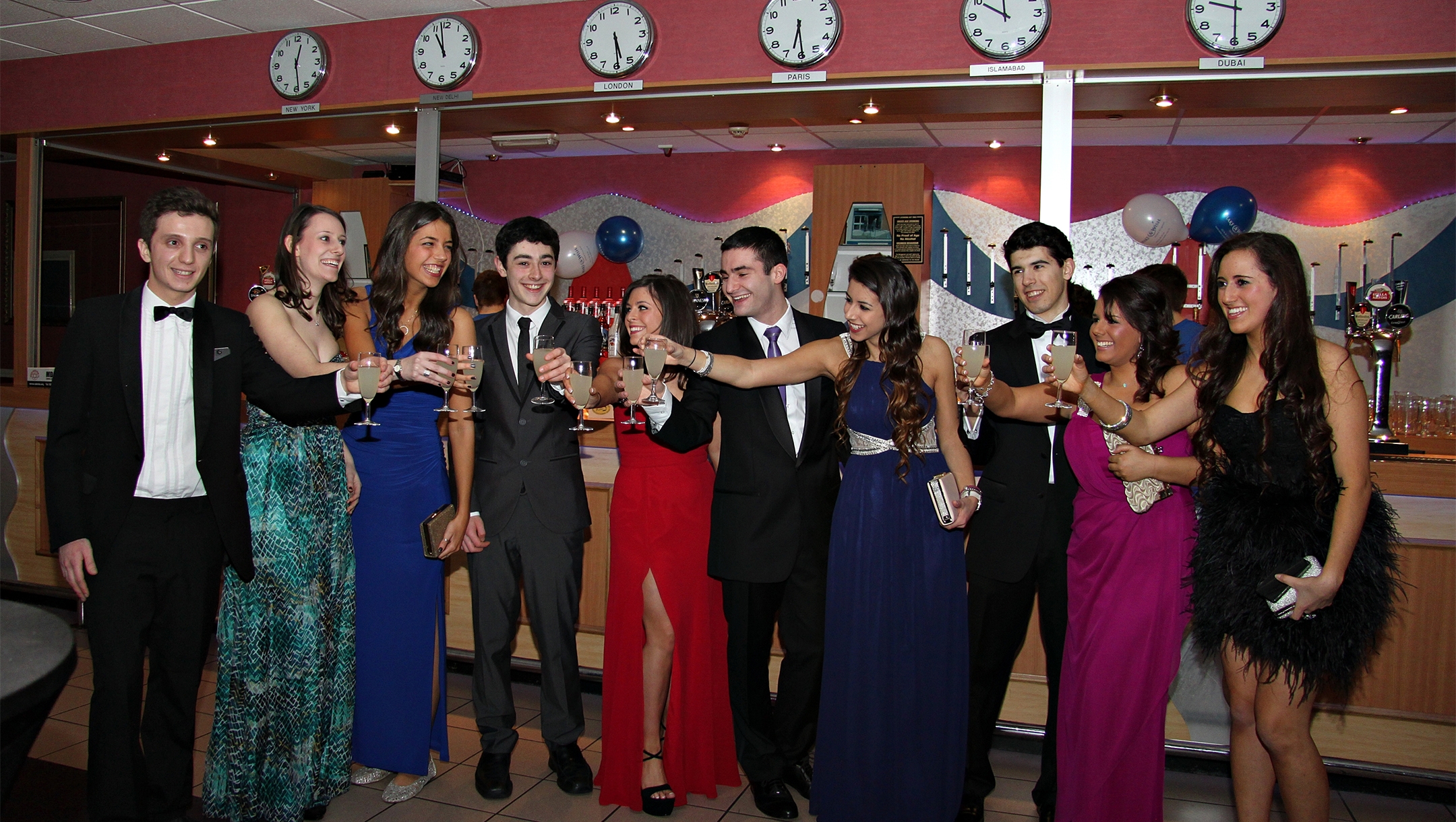 “I’d say many Jews come here because the Jewish scene is so active and because it’s a less politicized university than some of the ones in London,” Harris, the former president of the Jewish Society of Birmingham University, said of the institution. “It tends to draw more Jews in.”

Around campus, Harris and others often wear a sweatshirt of their Jewish society, called JSOC in campus jargon and pronounced “jay sock.” It’s emblazoned with a Star of David — often an invitation for abuse on campuses throughout the U.K.

Sipping a latte at the busy university branch of Starbucks, Harris said he has never encountered anti-Semitic abuse wearing the shirt in his three years studying political science at Birmingham U.

To Harris, this safety is partly rooted, paradoxically perhaps, in the high visibility of Jews on campus. Elsewhere in Europe and beyond, some Jewish students try to keep a low profile to stay safe.

The problem with doing that is that “eventually people don’t recognize you as a force to be reckoned with,” Harris said.

Jewish life at the University of Birmingham is not low profile.

Birmingham JSOC, the largest in Britain, holds weekly Friday night dinners, or FNDs, that often attract more than 200 people. There are three student-focused rabbis on campus in addition to the several rabbis working in the city.

The local Hillel House is one of only a handful of residential community centers for Jewish students still operating in the United Kingdom. They have closed down one after the other in recent years in what some community leaders fear reflects growing assimilation.

Birmingham University’s Hillel center is by far the largest in Britain, with about 40 residents year round. Situated a ways off a road, the red-brick building’s facade is partially covered by climbing plants. On misty days it looks like an old English estate.

Inside, a ping-pong table in the main hall, prayer books and empty vodka bottles that serve as candlesticks for Shabbat attest to a slightly less formal code of conduct than those of a 19th century manor. The place is particularly famous for its loud and alcohol-rich Purim parties that go on till morning and attract a non-Jewish following.

The Hillel House isn’t the only option for observant Jewish students. The university offers first-year students so-called kosher flats — essentially housing for those who want to live with Jews. Many of the students who sign on for a kosher flat during the freshman year stay together as flat mates, swapping their campus-provided accommodation for a property they rent on the affordably priced housing market.

It’s why “there are hundreds of Jews within a 5-minute radius of here,” said Josh Halima, a 19-year-old law student. He met most of his current Jewish flatmates — four women and four men — at a kosher apartment. Most students live in Selly Oak, a slightly seedy neighborhood near campus.

“There is just so much Jewish community life here that it covers the full range of life,” Halima said, noting the Hillel and Maccabbi sports clubs and a kosher shop with fresh meat in the Central Synagogue of Birmingham – quite the rare amenity for students outside Manchester and London.

And Birmingham has other advantages over the capital, Halima added.

“There are clear examples of anti-Semitism constantly happening in London and its campuses. The anti-Israel scene is disgusting. I wouldn’t feel comfortable there,” he said.

Then there’s the fact that housing in Birmingham costs about half what it does in London, with other expenses being considerably cheaper, too.

In Birmingham, by contrast, Regev’s address before Harris’ Jewish Society was attended by a pro-Israel vice chancellor of the university, Robin Mason — a rare show of legitimacy in British academia for the Jewish state.

“The message it sent is that Jewish and Zionist students should not need to fear or hide on campus,” Harris said.

Bouattia, the former president of the National Union of Students, has also taken note of the differences at the University of Birmingham.

“The University of Birmingham is something of a Zionist outpost in British Higher Education,” she wrote in an op-ed in 2011. “It also has the largest JSOC in the country whose leadership is dominated by Zionist activists.” That year, she noted, the Students’ Union at the University of Birmingham adopted the European Union’s “ominous” definition of anti-Semitism, as she termed it.

When pro-Israel speakers are allowed to speak on U.K. campuses, they are blocked sometimes from actually doing so by protesters. In 2016 at University College London, Hen Mazzig, an Israeli activist for the rights of Jews who fled Arab countries, tried and failed to deliver a lecture. At Oxford University in 2010, a student shouted “slaughter the Jews” during an address by Israel’s then deputy foreign minister, Danny Ayalon.

Last year, the Chabad Student Centre at Oxford was targeted twice by individuals who left threatening notes, started a fire outside and doused it with white powder.

In addition to heckling and vandalism, Jews in recent years say they have been made to feel institutionally unwelcome on some British campuses.

The University of Warwick last year hosted an event in which several Jews allegedly were screened and barred from attending a public lecture. A King’s College London researcher argued that Israel’s policy of subsidizing multiple fertilization procedures for all its citizens is “primarily aimed to serve the reproductive rights of its Jewish population at the expense of the indigenous Palestinian population.”

At the University of Leeds, the student government in March voted against a motion calling on the British institution to adopt the International Holocaust Remembrance Alliance definition of anti-Semitism. In February, a student government association at Oxford’s Somerville College passed a nonbinding motion to effectively ban all halal and kosher meat.

Bouattia was not re-elected as president of the National Union of Students, ending her single term in 2017. But anti-Semitic abuse has continued and arguable worsened on British campuses and beyond.

Still, even outside Birmingham, “broadly speaking, the vast majority of Jewish students are having a positive experience at university,” Harris said, despite the occurrence of incidents.

“There has been a massive increase in the number of Jews coming to study here over the past decade, five years even,” said Rabbi Fishel Cohen, a Chabad rabbi who has worked as chaplain at the University of Birmingham for more than 30 years. 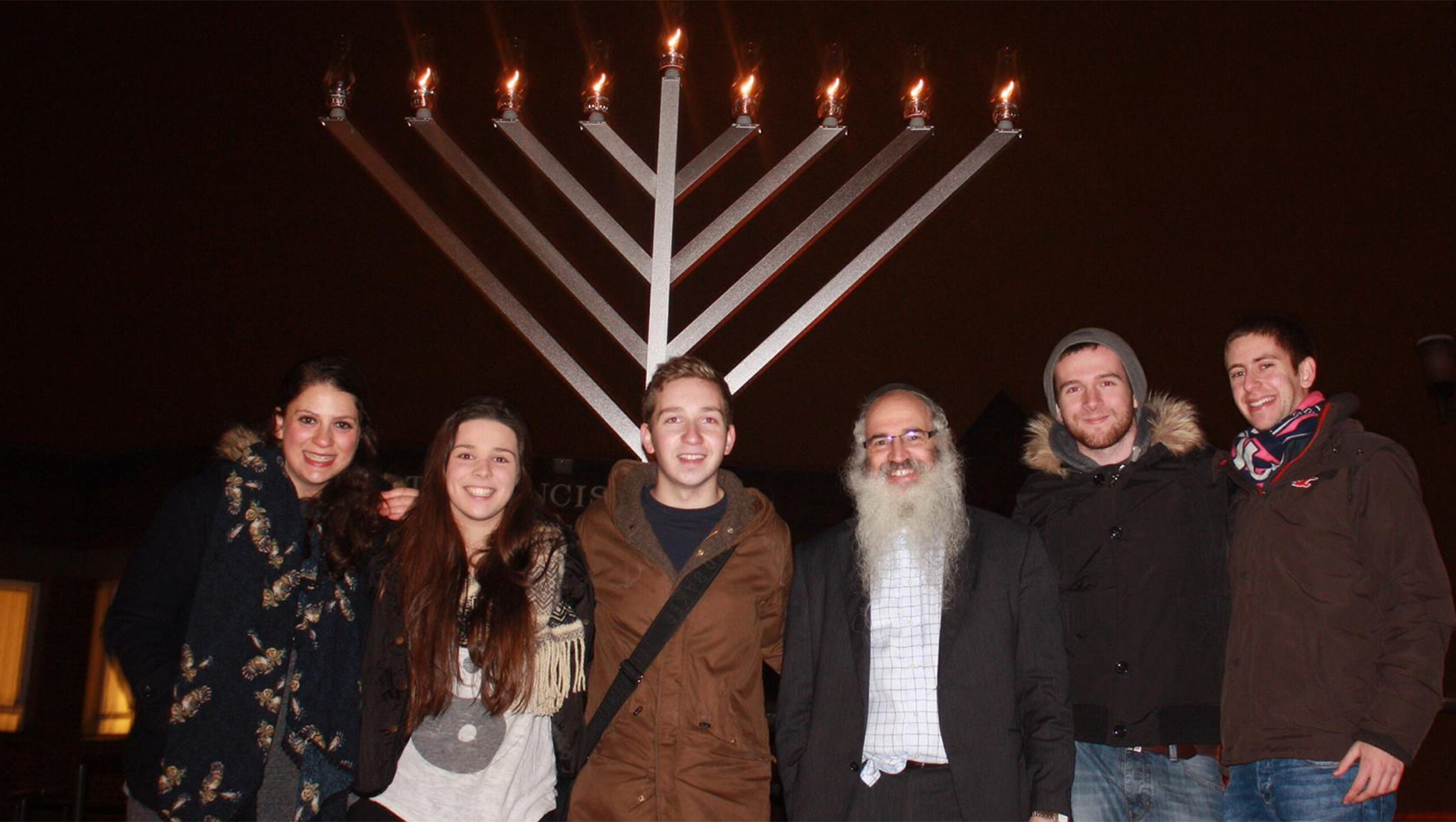 Rabbi Fishel Cohen with Jewish students at a candle lighting ceremony in Hanukka in Birmingham, the United Kingdom on Dec. 24, 2014. (Courtesy of Rabbi Fighsel Cohen /The Birmingham Tab)

That has been a welcome development for the Jewish community in the city of Birmingham — a graying congregation that is one of Europe’s friendliest. (“If you’re a stranger and you come to our shul, you will be approached and invited to lunch,” David Benson, 68, said about his Central Synagogue.)

This outreach has paid off for the dwindling Jewish community of Birmingham, which used to be one of the country’s largest but now has about 1,000 members (at the local Jewish school, about 80 percent of the students are non-Jews, most of them from Muslim families.)

The students help with assembling a minyan — a quorum of at least 10 Jewish men required for some prayers in Orthodox Judaism.

“Getting it sometimes is a struggle,” said Sybil Prais, 56, who often organizes Shabbat meals for students and other congregants at Central Synagogue, one of Birmingham’s four Jewish houses of worship.

But beyond that, the students “are more or less the only young people in the congregation,” said Prais, whose two daughters live in London and Leeds. “The students bring their enthusiasm, there’s always chatting at shul. It’s just much livelier with them.”