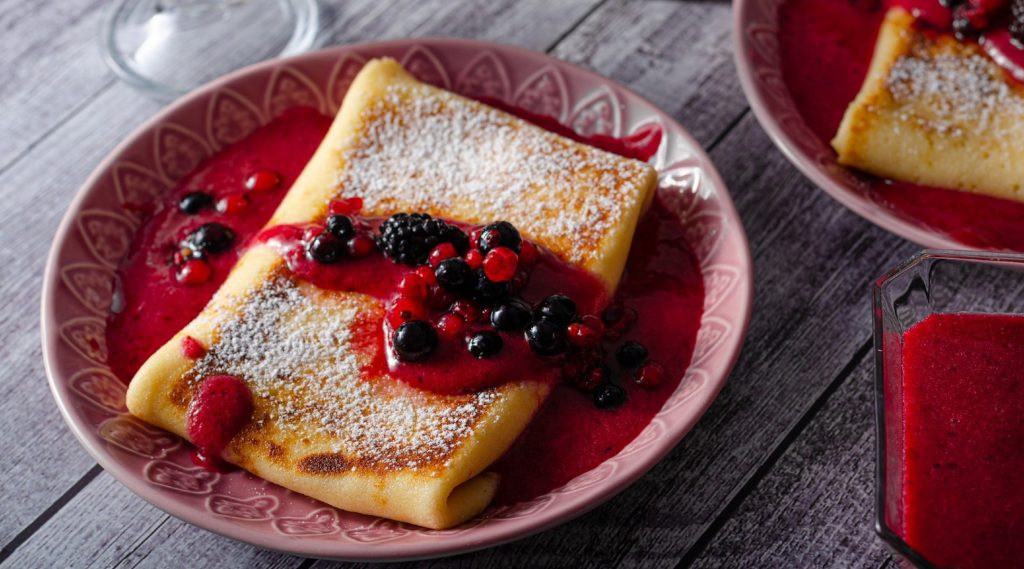 Blintzes are one of Shavuot’s most popular dishes. Long associated with Ashkenazi cooking, the light and airy hug of the blintz pancake envelops pillowy fillings such as whipped farmer’s cheese or fruit compote. To call it a crepe is like calling chicken soup consommé. It sounds more fancy, but it lacks the tradition and warmth.

For Florence Tabrys, a Holocaust survivor, blintzes were a lifeline to her former life near Radom, Poland. I spoke to Florence when writing my first book “Recipes Remembered, a Celebration of Survival,” a compendium of stories and recipes I gathered from Holocaust survivors. I learned that as a child, Florence and her sister were separated from their parents in 1942 and sent to work in a munitions factory. They were eventually moved to Bergen-Belsen, where they remained until liberated by the Russian army. Florence never saw her parents again, but the memories of her childhood’s favorite foods sustained her throughout the years. Her sweet and creamy cheese blintzes became a family tradition; she would prepare them in large batches and freeze them so they would always be at the ready.

Topping blintzes is always a game of chance. For those growing up in Poland, most likely it was whatever was on hand from yesterday’s breakfast or Sabbath lunch. Hanna Wechsler, a survivor of Auschwitz, described her mother’s “naleshniki” as a cross between a thin crepe and a traditional blintz. She remembers her mother filling them with strawberry preserves, chopped nuts and a touch of sugar, then topping them with a strawberry sauce.

Hanna described her experience in Auschwitz to me in the most poignant way. Her mother would sneak out of the barracks and bring back food that had been stolen from the camp’s kitchen to sustain Hanna. She said, “My mother gave birth to me every day we lived in Auschwitz because without her I would not have survived.”

As an homage to these remarkable women, I present Florence Tabrys’ creamy cheese blintzes topped with Hanna Wechsler’s strawberry sauce. Enjoy them on Shavuot and all year long. And remember, the thread that weaves Jewish food is vital but fragile, and needs to be lovingly maintained.

Note: The strawberry sauce will keep for 1-2 weeks in the fridge. You can also follow the same preparation using frozen blueberries or raspberries.

For the blintz batter:

For the blintz filling:

For the strawberry sauce:

1 tsp cornstarch juice and grated peel of half a lemon

To make the strawberry sauce, in a medium saucepan, cook the strawberries, sugar, water and cornstarch over medium-low heat, until the berries are very soft, about 15 minutes. Puree the berries and stir in the lemon juice and grated peel. Serve hot or cold over blintzes.