(JTA) — With two degrees in Asian studies and 15 years of his life spent living and working in China (everything “from acting to the diamond business to real estate”), Rabbi Matt Trusch has a lot of experience with China.

But antisemitism wasn’t one of those experiences until he began posting on Douyin, China’s TikTok, from his home back in Texas in 2021.

Speaking in fluent Mandarin peppered with Chinese idioms and filmed in front of a bookshelf lined with Jewish texts, Trusch passionately shares Jewish parables from the Talmud and the Tanya — a book of Hasidic commentary by the rabbi who founded the Chabad Orthodox movement — and the life and business lessons they may offer Chinese viewers. With nearly 180,000 followers, his videos have accumulated nearly 700,000 likes.

But the comment section under Trusch’s videos is revealing. In China, the line between loving Jews and hating them for the same stereotypical traits can be thin. On his most viral video, which has over 7 million views and explains how China helped give refuge to Jews escaping Europe during World War II, comments laced with antisemitic tropes seem to outnumber the ones thanking Trusch for sharing Jewish culture and wisdom.

“You don’t want to take my money, do you?” reads one top comment.

“Wall Street elites are all Jews,” another comment says; others call Jews “oily people,” a play on the Chinese characters that spell out the word for “Jew.” Many blame Jews for the mid-19th century Opium Wars between China and foreign powers, or for inflation in pre-World War II Germany. Other commenters repeatedly ask Trusch to address Palestine on videos that have nothing to do with Israel.

The comments reflect the fact that in the minds of many in China, the Talmud is not a Jewish religious text but a guide to getting rich. The belief has spawned an entire industry of self-help books and private schools that claim to reveal the so-called money-making secrets of the Jews.

In his Douyin bio, Trusch appeals to this belief, describing himself as a rabbi who shares “wisdom of the Talmud,” “interesting facts about the Jewish people,” “business thought” and “money-making tips.” Trusch told the Jewish Telegraphic Agency that appealing to Chinese stereotypes about Jews was a strategic decision meant to expose more Chinese people to Jewish precepts.

“We do sort of exploit the fact that [Chinese people] are interested in listening to Jewish business wisdom to get them to follow us. We have sort of played to that before,” he said, referring to himself and a Jewish Chinese-speaking partner in Australia who is helping with the project.

Appealing to Chinese interest in the Talmud as a business guide is strategic for another reason: Religious activity is complicated in China, where Judaism is not one of the five recognized religions, and proselytizing by foreigners is forbidden.

“Pirkei Avot and the Talmud do not mean religion in China, even though those are Jewish texts that we learn Torah from,” Trusch said. “If I were to say, ‘I’m going to teach Torah concepts in China,’ that will be forbidden, probably. But if I talk about things from the Talmud, then it’s not threatening.”

Trusch always had an interest in China. After getting an undergraduate degree in Asian studies at Dartmouth College and a master’s degree at Harvard University, he spent 12 years in Shanghai doing business in a range of industries. While he was there, he grew closer to Judaism and began flying to Israel every two weeks to study at a yeshiva there.

In 2009, Trusch moved back to the United States with his family and settled in Houston, where he is active at two Chabad centers. Still, he made frequent visits to China on business (including starting his own Chinese “white liquor” company called ByeJoe) until the pandemic struck in 2020. With no way to visit China in person, Trusch and his partner began making videos about Judaism on Douyin as a way to connect with people there.

“When I was in China, I very rarely felt anything but a fond appreciation of Jews” from Chinese people, Trusch said. He was aware of the stereotypical way Chinese people think about Jews: as intelligent and business-savvy, paragons of worldwide wealth and power with control over Wall Street and the media. Much of the time, these traits are viewed with admiration, and stereotypes are perpetuated even in mainstream media.

And yet, some of the most popular antisemitic comments on Trusch’s videos reference the so-called “Fugu Plan,” a 1930s proposal by several Japanese officials to settle 50,000 German Jews in Japanese-occupied Manchuria. Some in the Japanese leadership were inspired by the antisemitic forgery “Protocols of the Elders of Zion,” believing that resettling Jews in occupied China would attract great wealth and the favor of world powers like Britain and America.

The Fugu Plan never came to fruition, but the antisemitic and ultranationalist political blogger Yu Li (who blogs under the name Sima Nan) has shared the story with his nearly 3 million followers. In a 20-minute-long antisemitic rant, he says the Fugu Plan is evidence that the Jews colluded with the Japanese to establish a Jewish homeland on Chinese territory — a conspiracy that fits a nationalist narrative that China is constantly under attack by foreign powers. A simple search for the “Fugu plan” on Douyin reveals countless videos explaining the Jewish-Japanese “conspiracy” and questioning whether Jews are worthy of sympathy for atrocities like the Holocaust.

Sima Nan isn’t the only prominent figure known for antisemitism. Even in a country with as few as 2,500 Jews — mostly foreign nationals — among 1.4 billion Chinese, antisemitic conspiracy theories appear to be alive and well, at least among online commenters, anti-Israel leftists and some prominent Chinese nationalists. 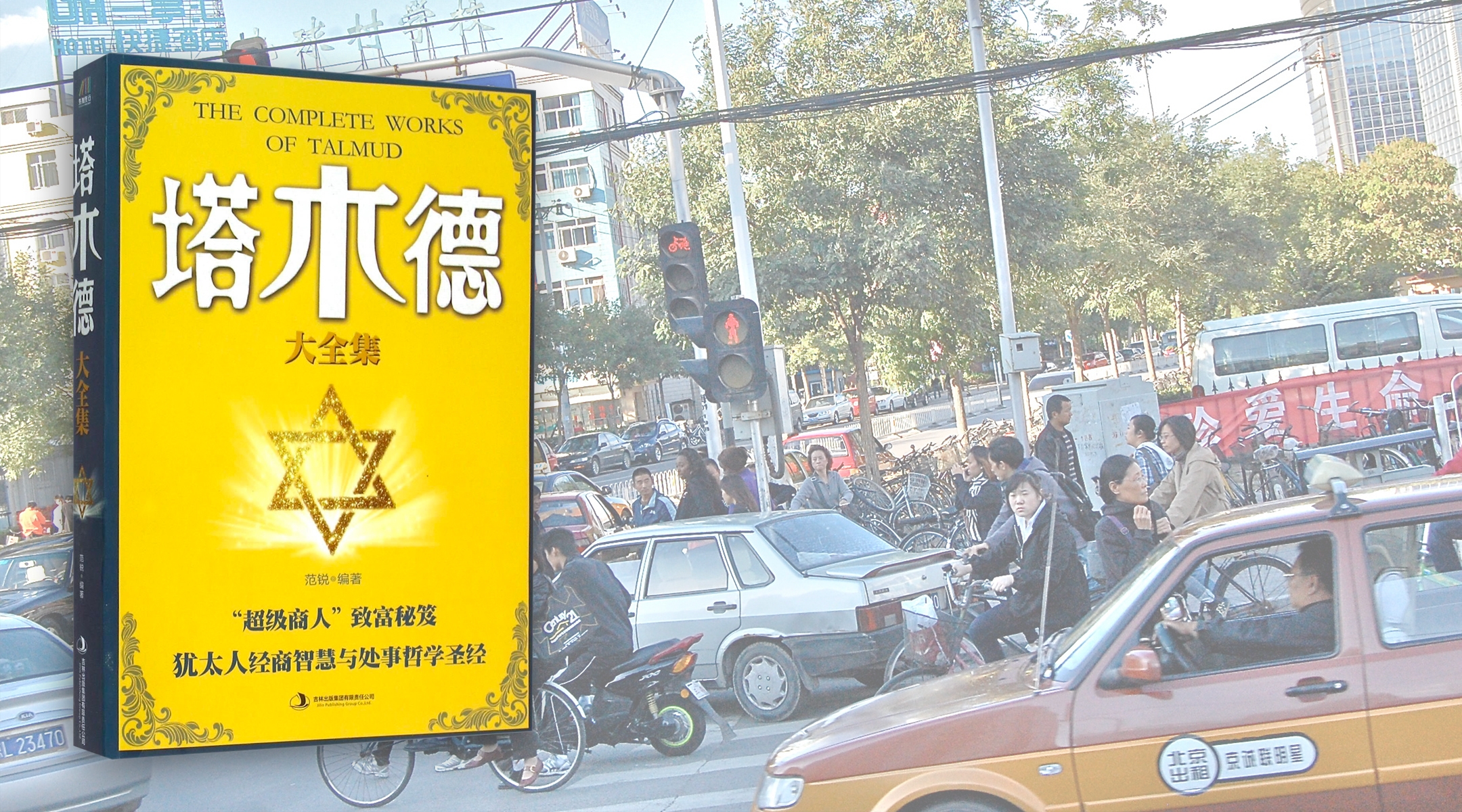 In Chinese cities like Beijing, above, compilations of the Talmud are packaged and sold as “Jewish wisdom” on business success. (eje/Flickr Commons)

As Tuvia Gering, a research fellow with the Jerusalem Institute for Strategy and Security puts it, ideas like Sima Nan’s “are seamlessly couched in state-sanctioned nationalistic narratives that warn against foreign encirclement and influence.”

Jews living in China are likely to tell you that they’ve rarely experienced what they would consider antisemitism. As in any other country, young people on social media are being introduced to antisemitic ideas and conspiracy theories — such as a correlation between the Jews and COVID — that they would be unlikely to encounter elsewhere, said Simon K. Li, executive director of Hong Kong’s Holocaust and Tolerance Center.

“​​I think that the problem of the Jewish conspiracies in our region persists and runs deeper than we think because it’s expressed more openly in the anonymity of social media and web portals like Douyin/TikTok and Tencent QQ rather than in face-to-face interactions,” he said.

One recent study of China’s online “alt-right” community did not find signs of significant antisemitism, but Kecheng Fang, a co-author of the study, said it’s no surprise that “sensationalist nationalist” figures are spewing antisemitism online.

Chinese authorities are aware of hate speech online: In June, a BBC investigation into an industry of racist videos popular in China prompted a response from the Chinese government. China’s embassy in Malawi, Africa — where one racist video was shot — said it “strongly condemn[s] racism in any form, by anyone or happening anywhere.”

Later that month, China released a set of draft rules instructing content platforms to review social media comments before they are published and to report “illegal and bad information” to authorities.

But these developments haven’t seemed to make much impact, at least on Trusch’s videos, which receive a fresh set of antisemitic comments each time he posts daily.

The Chinese Consulate in Israel did not respond to requests for comment. 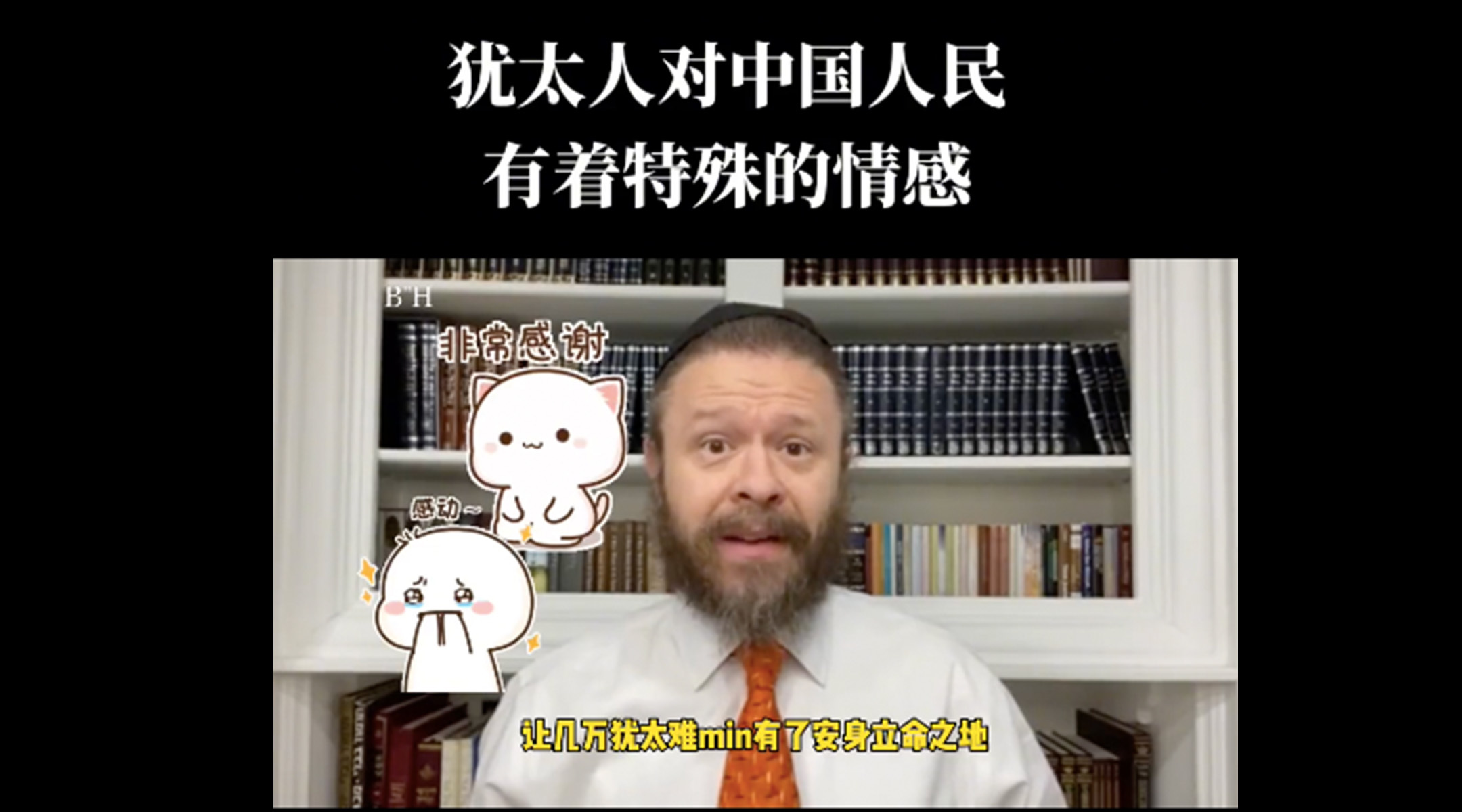 Jews “have special emotions toward the Chinese,” Rabbi Matt Trusch explains in a Douyin video aimed at the vast Chinese audience. (Courtesy)

Trusch’s mission since he started posting on Douyin was to connect Chinese people with Jewish culture and wisdom, especially given China’s ongoing COVID-19 restrictions that prevented cultural exchange. It’s reflective of the Chabad movement, which often provides the only outposts of Jewish engagement in places with few Jews, including in China, where the movement operates in half a dozen mainland cities. Trusch is even working on translating the Tanya into Chinese — “an accurate and academic translation,” he says, unlike the copies of the Talmud sold in Chinese bookstores.

He and his Australian partner were at first reluctant to address the antisemitism he was getting on his videos.

“Initially I wanted to just ignore all these people and never comment about these things they’re saying,” he said. “But I think sooner or later, we did sort of say, ‘listen, what they’re saying is not right, it’s not correct, and these people are being fed false news.’”

They’ve since begun responding to some antisemitic comments or making more videos that attempt to address and debunk common stereotypes or conspiracy theories.

“I want to ask the bloggers attacking Jews, what are you contributing to society?” he asks in one Douyin video posted in early May about Jews’ contributions to the world.

Not all comments under Trusch’s videos are negative; in fact, in recent weeks the antisemitism seems to “have quieted down somewhat,” he said. A majority of commenters continue to express their support and interest in learning about Jewish culture and history from an actual rabbi — Trusch was ordained last year after many years of study — given that good information is limited within the confines of China’s great firewall.

Those positive responses, and even the opposition, are what keep him going, he says.

“We do try to have a very positive message. We don’t try to say negative things about other people in any way and we are trying to portray Jews in a very positive light,” he said. “And because of the opposition, we’re trying even harder.”