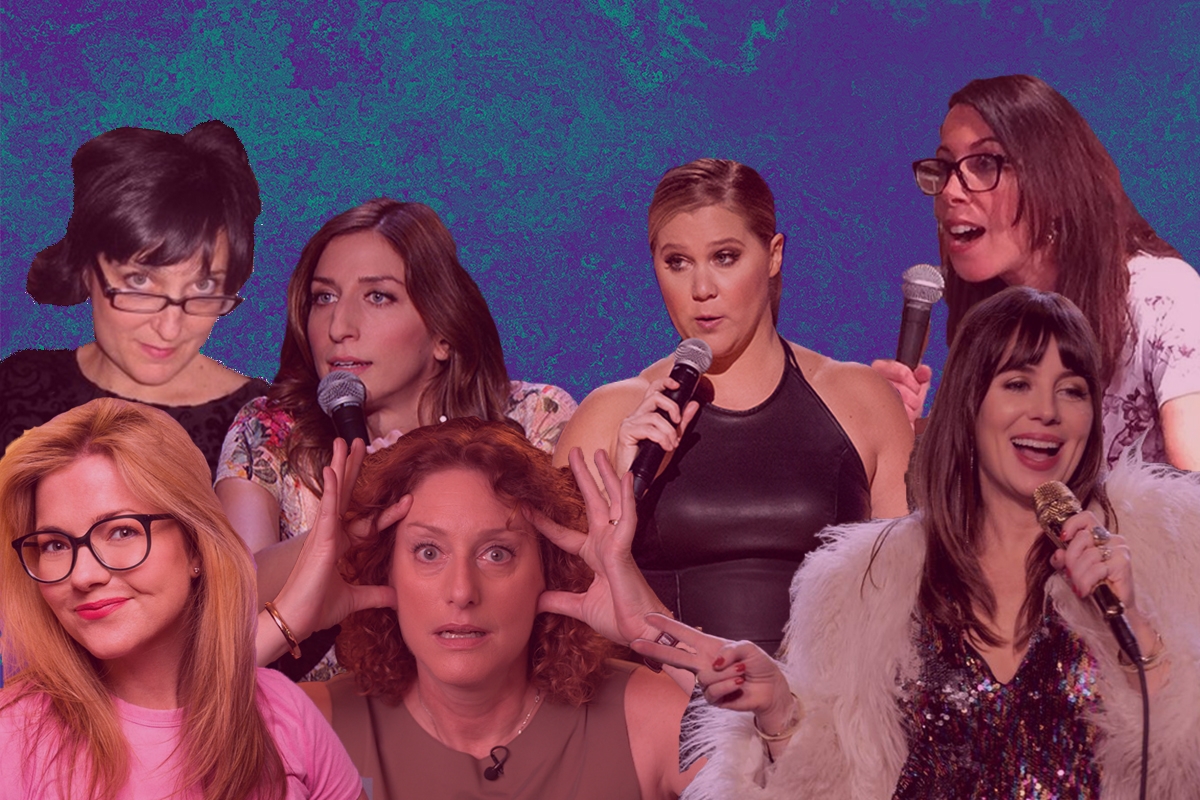 When screenwriter Amy Sherman-Palladino gifted the world with “The Marvelous Mrs. Maisel,” we here at Kveller went wild. At last there was a show (a major hit, no less!) that seemed to be aimed directly at American Jews — specifically speaking, Jewish mothers.

Although the titular character Midge Maisel has been criticized for being an absentee parent to her two young children, she is equally praised for her spitfire standup comedy. Jews and humor notoriously go together like cream cheese and bagels, but another unwavering and less flattering stereotype is that women — even Jewish women — aren’t funny. The marvelousness of Mrs. Maisel is that her comedic genius busts that sexist trope and gives Jewish mothers pursuing stand-up the representation and validation they deserve.

The thing is, Mrs. Maisel isn’t real. She’s a perfectly curated character with seemingly zero flaws that no Jewish mother — or any woman — should compare herself to. Luckily, there are real life Jewish stand-up “momedians” who prove that women can be funny and exemplary parents. Obviously, we rounded them up for you.

“Brooklyn Nine-Nine” star Chelsea Peretti has been a member of the the momedian club for just two years, but her comedy career started long before that. Married to fellow comedian Jordan Peele, we loved when the 40-year-old mom pumped breast milk for her son Beaumont Gino at the Oscars last year. Peretti is notorious for joking about inheriting both her Jewish and Italian parents’ noses, Jewish men and incest, and overall her incredibly dry humor. Though she hasn’t performed live in quite some time, the former “Saturday Night Live” writer’s hourlong special, “One of the Greats,” is currently streaming on Netflix. If you’re not too sore from laughing when you’re done watching it, give Peretti a follow on Twitter. In 2014, Paste Magazine included her in their roundup of the best Twitter accounts — and we couldn’t agree more.

For 17 years, Robin Fox was a certified New Jersey housewife. That all changed when she picked up a mic and never put it down. For the past decade, Fox has given crowds throughout the tristate area the content they came for: suburban Jewish mom jokes. Her sets include stories about her 27-year marriage, raising children and life as a stay-at home mom. Having performed at popular venues like Gotham Comedy Club, Broadway Comedy Club and Caroline’s, when you see Fox on the stage, you know you’re in for a treat.

Judy Gold is a household name — that is, unless you’ve been living under a rock for a while. While raising her now young adult sons, the lesbian Jewish comedian worked her tuchus off and snagged not one but two Emmys for her work as a writer and producer on “The Rosie O’Donnell Show.” Gold has championed nearly every medium: She hosts the “Kill Me Now” podcast, starred in two one-woman shows and appeared on numerous TV shows. Her latest album, “Kill Me Now,” came out last year, and she’s also a hilarious guest on Kveller’s very own podcast, “Call Your Mother.” Listen to it here!

Subjectively speaking, Natasha Leggero is the funniest Jewish momedian on Instagram. Who else would share a photo of themselves dripping in gold jewelry while breastfeeding their daughter? Glamorous, hilarious and gorgeous, the “Another Period” star’s shock-comedy hasn’t changed much since she welcomed her daughter last year with her husband (and fellow Jewish comedian) Moshe Kasher. The Italian comedian converted to Judaism before marrying her Orthodox-raised husband, and though she hasn’t performed stand-up since giving birth, Leggero and Kasher recently released their hour special “The Honeymoon Special” on Netflix.

By day, Talia Reese serves lunch in her daughters’ school with other yeshiva moms. By night? The Orthodox momedian performs stand-up with “a bunch of foul-mouthed comics.” The New York lawyer, married to another Jewish lawyer, manages to juggle a world of raunchy humor while maintaining a religious lifestyle. “He wouldn’t be upset if he caught me in bed with another man,” Reese has joked about her husband. “Unless we were eating a ham sandwich.” Catch her spitting witty Jewish jokes at your local synagogue, Stand Up NY, Comic Strip Live or the Greenwich Village Comedy Club  — you won’t regret it.

South Jersey native and New York City-based comedian Jamie Aderski loves to talk about how unprepared she was for kids. Currently expecting her second child, Aderski’s one-woman show “Cry Baby: My (Reluctant) Journey Into Motherhood” was featured in The New York Times and had three sold-out extended runs at The People’s Improv Theater. If you missed that performance, never fear! Aderski’s latest stand-up show, “Celibate and Pregnant,” is running until April. When she’s not fending off disses from her mother-in-law, Aderski enjoys white wine and raw oysters.

OK, so she’s not a mom yet, but the Long Island-bred Amy Schumer is very nearly in the momedian club. Infamous for her sex jokes, Schumer’s second upcoming Netflix special “Growing” promises to stay on brand, but you can expect knee-slapping takes on the joys of womanhood, marriage and pregnancy. The “I Feel Pretty” star has been scrutinized for her explicit content but, an exemplary feminist, she stands tall in the face of trolls. While you wait for her special to come out, binge her newish podcast “3 Girls One Keith” on Spotify, and read her autobiographical book “The Girl with the Lower Back Tattoo,” which helped her land a spot as the first woman on Forbes’  highest-paid comedian list.