These 2 billionaires love Israel but hate Trump, the president who has been closest to its government 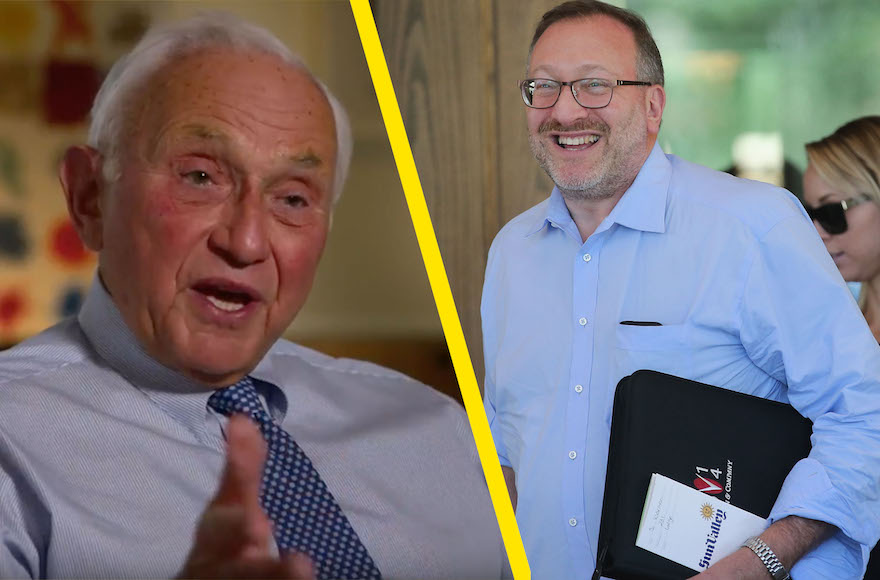 The move away from the Republican Party by Les Wexner, left, and Seth Klarman as the midterm elections near is being seen as greatly significant. (JTA Collage/Getty Images)

“Israel and U.S. Jewish organizations should sharpen their awareness of a trend of growing frustration within the Trump administration that the president’s pro-Israel moves (especially the transfer of the embassy to Jerusalem) are not sufficiently appreciated by large segments of the American Jewish community,” said the report, which was drafted by a group known for its ties to the elites in Israel and the United States.

It’s become the Trump anomaly: Israeli Prime Minister Benjamin Netanyahu has said that the U.S.-Israel relationship has never been so close. Trump has moved the U.S. Embassy to Jerusalem, maintained levels of defense assistance to Israel while cutting spending elsewhere, pulled out of the Iran deal reviled by Netanyahu and thoroughly defunded the Palestinians.

The Jewish divide on these moves is on one hand not surprising: The majority of Jews typically vote Democratic, and beyond the 20 percent of mostly Orthodox and right-leaning Jews who vote Republican tend to poll well to the left of Netanyahu and his government. But the trend was thrown into sharp relief this week when two Jewish billionaires said they were switching from supporting Republicans to backing Democrats ahead of the midterm elections. Even a hawkish pro-Israel agenda, they seemed to signal, doesn’t justify the damage they feel Trump is doing to America and its democratic institutions.

The switch by Seth Klarman and Les Wexner, coming the same week, is a big deal: More than any midterm election in recent memory, Nov. 6 may change the course of a presidency. If the U.S. House of Representatives goes to the Democrats, Trump may face impeachment. If the House and Senate go, his agenda is officially dead.

How significant are the switches? Here’s an examination according to how involved they are in pro-Israel policies, how Republican they are, and how far have they distanced themselves from Trump and his policies.

Klarman, 61, is a hedge fund manager based in Boston whose net worth has been put at $1.5 billion. His investment advice is considered so sound that “Margin of Safety,” an out-of-print book he wrote in 1991, goes for $950 on Amazon.

Klarman’s interest in Israel appears to be fairly recent — but very strong. Sparked by his concerns about terrorism following the 9/11 attacks in New York and Washington, D.C., he visited the country and became convinced Israel was getting short shrift in the press. That led him to donate money to pro-Israel media monitoring groups like CAMERA and MEMRI, and culminated in  2012 with his founding of The Times of Israel online daily with former Jerusalem Post editor David Horovitz.

“As a longtime student of the history of anti-Semitism, I know that this blind hatred is never the fault of Jews,” he said at the time. “Moreover it is clear to me that anti-Zionism is simply the newest form of anti-Semitism. When the Jewish state is singled out above all others for criticism, such as it is at the United Nations, this is anti-Semitism.”

Publishing The Times of Israel represented a slight shift left — Horovitz, like Klarman, is critical of Israel’s settlement movement — but Klarman remains firmly in the pro-Israel mainstream. A Times of Israel gala in New York in 2015 highlighted “good news” stories out of the country.

Klarman never liked Trump: A longtime donor to Republicans, he split the difference in 2016, backing the Democrat Hillary Clinton for president while funding GOP congressional campaigns.

“His words and actions over the last several days are so shockingly unacceptable in our diverse and democratic society that it is simply unthinkable that Donald Trump could become our president,” Klarman said in August 2016. The trigger was Trump’s claims then that the election, which Clinton was favored to win, would be “rigged.”

Klarman was never a registered Republican, but he backed an array of other candidates for the GOP nomination and has backed GOP lawmakers.

No longer: The main item on the agenda must be to thwart Trump, he said this weekend in a rare interview with Bari Weiss of The New York Times Op-Ed page. And he faulted Republican lawmakers for not standing up to the president.

“People should be asking themselves: Why are we writing checks to these same people who are cowards?” he said.

Klarman even had kind words for Alexandria Ocasio-Cortez, the New York nominee for Congress who is a democratic socialist and has had sharp words for Israel.

“In a lot of ways I’m actually excited about somebody like Alexandria Ocasio-Cortez coming along because it’s a way of younger people and people of color and people who are different finding their voice and being part of the process,” he said.

Leslie Wexner, 81, is a fashion mogul based in Columbus, Ohio. Until he quit the party,  he was considered the richest Republican in his state with a fortune worth $4.7 billion.

Through the Wexner Foundation, Wexner has long supported a series of programs meant to develop pro-Israel leadership among teens, adults, volunteers and Jewish communal professionals. He is also a founding funder of Birthright, the program that pays for Israel tours for young Jews, and a major giver to Ohio’s Jewish federations.

Last year, after Trump equivocated about condemning a neo-Nazi march in Charlottesville, Virginia, Wexner told staffers at L Brands, which he heads, that he felt “dirty” and “ashamed” when thinking about the president.

But unlike Klarman, Wexner was always unmistakably Republican: He joined President George W. Bush on his 2008 visit to Israel marking the country’s 60th anniversary.

And he was harsh in explaining why he was cutting out of the party and becoming an Independent, speaking last week at an event on political civility in Columbus sponsored by the Columbus Partnership, a business and civics group he chairs. Like Klarman, he was fed up with Republicans for not standing up to Trump.

“I won’t support this nonsense in the Republican Party,” Wexner said. “I’ve been a Republican since college, joined the Young Republican Club at Ohio State.”

And like Klarman with Ocasio-Cortez, Wexner ventured into once unthinkable territory for a Republican, lavishing praise on former President Barack Obama.

“I was struck by the genuineness of the man; his candor, humility and empathy for others,” Wexner said of Obama, who had just met privately with the Columbus Partnership.

Much of the coverage of Klarman and Wexner’s defection has focused on their disaffection with Trump, but a few observers have said that both may be well aware of the way Trump’s Israel policies are dividing Jews.

“The subtext here is that both Wexner and Klarman have stellar records of support for transformative Israeli and Jewish communal initiatives,” tweeted Shalom Lipner, a former adviser to Netanyahu who is now with the Brookings Institution’s Center for Middle East Policy. “That they would break with the GOP over Trump speaks volumes about how they perceive his impact on both Israel and the Jewish community.”

By contrast, Matt Brooks of the Republican Jewish Coalition said that loyal Republicans ultimately will reward the administration for its support of Netanyahu.

“Very few are neutral on the Trump Administration,” Brooks told Haaretz. “As such, it’s not surprising that some GOP donors have decided not to give.

“However, we are also seeing many new donors and people significantly increasing their support to the GOP because of the strong pro-Israel actions of this president, including moving the embassy, ending the Iran deal and cutting off funding” for the Palestinians.

The post These 2 billionaires love Israel but hate Trump, the president who has been closest to its government appeared first on Jewish Telegraphic Agency.