There’s a lot you can learn about the Talmud from kung fu movies, according to a new play

NEW YORK (JTA) — In trying to understand the often esoteric arguments of the Talmud, people often turn to teachers, dictionaries and a range of other study aids. Jesse Freedman has found another helpful, albeit unexpected source: kung fu movies.

Five or six years ago, the Jewish director and playwright was watching the martial arts film “Canton Viper” when he realized that it reminded him of something in the Talmud, which he spent some time studying in college.

Among the many similarities Freedman found between the two are the relationships between students and teachers, who often debate and feud over the small intricacies of their respective traditions.

The structure of the works are similar, too: In kung fu movies, narrative scenes are interspersed with choreographed fight scenes that propel and comment on the plot. In the weighty compendium of Jewish law and lore, legal discussions are interspersed with anecdotes and parables that may illustrate a principle.

“The relationship between narrative and choreographic material in kung fu movies provides an interesting opportunity to interpret the Talmud for the stage,” Freedman said.

So Freedman, 37, decided to do what he does best: write a play about it. The result is “The Talmud,” which will run Sept. 12-28 at the Target Margin Theater in Brooklyn. The 75-minute play was created by Meta-Phys Ed., a performance company that Freedman founded with Rabbi Bronwen Mullin and for which he is the artistic director.

“That is basically just how I make work,” said Freedman, a Brooklynite who grew up in Stamford, Connecticut. “There are a couple things I’m interested in and I kind of just smash them together.” 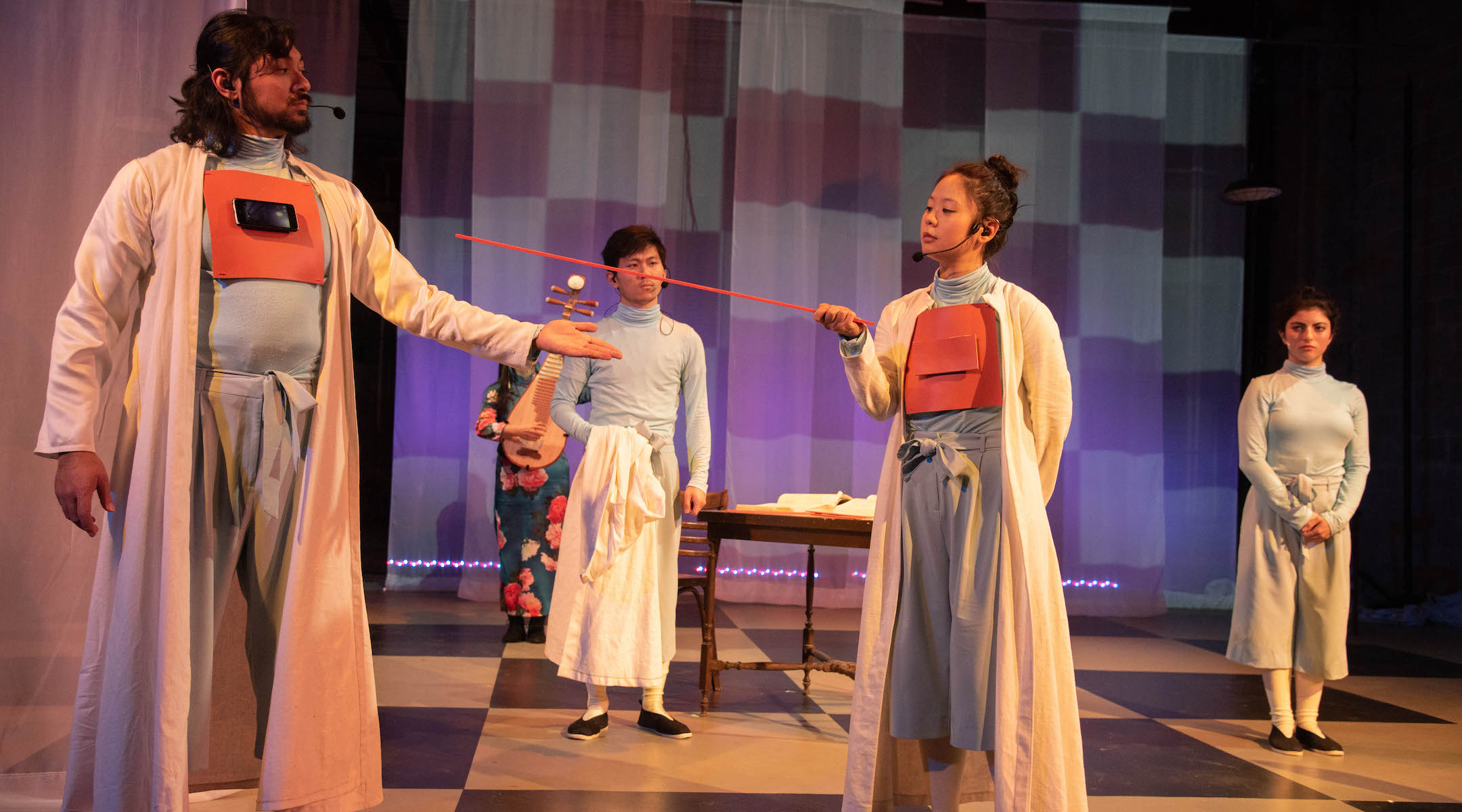 Freedman’s play finds similarities between kung fu and Talmud study in the relationships between students and teachers. (Courtesy of Freedman)

The play’s plot comes from the Talmud tractate Gittin, which primarily deals with laws related to divorce. Freedman focuses on a digression in the text concerning land confiscated by Romans from Jews during the First Jewish-Roman War, which ultimately led to the destruction of the Second Temple.

In a reimagined Talmudic academy, rabbis talk about the law — in dialogue taken from the English translation of the text — with choreographed sequences inspired by kung fu. It features a four-person cast and a musician playing the pipa, a traditional Chinese lute. There are also video projections and dance, ranging from postmodern to hip hop.

It’s not the first time Freedman has combined unlikely topics in a play. His 2018 performance work “Wake … Sing …” drew inspiration from a Depression-era drama by the Jewish-American writer Clifford Odets, biblical books about the resurrection of the dead and zombie movies.

“Most of my projects tend to have some kind of a Jewish thread,” he said.

The director said he has enjoyed the education about the richness of two unique cultures.

“It’s been great to learn about thousands of years of Jewish and Chinese tradition together,” he said.