(JTA) — The rain lasted all night, forcing the dance party into a nearby barn. But the bride saw the unexpected downpour as a blessing.

“In earth-based Judaism, there’s so much emphasis on praying for rain,” said Adi Aboody, who married Ophir Haberer on June 4 at the Green Valley Farm and Mill in Sebastopol, in northern California. “If you took out the logistical craziness of it, it felt magical.”

Aboody, 32, and Haberer, 31, are deep proponents of earth-based Judaism, a grassroots movement that seeks to center Jewish religious practice on the earth. They met in 2015 through Wilderness Torah, a San Francisco Bay Area organization that hosts festivals, campouts and education programs for this growing community of earth-focused Jews.

They are at least the ninth couple to meet through Wilderness Torah, which was founded in 2007.

“Our immersive programs have the most unique community and village-building technology, ritual and celebration,” said Simcha Schwartz, Wilderness Torah’s director of development, who met his wife at the organization’s Passover in the Desert festival. “That recipe feeds authentic connection and vulnerability, and therefore love.” 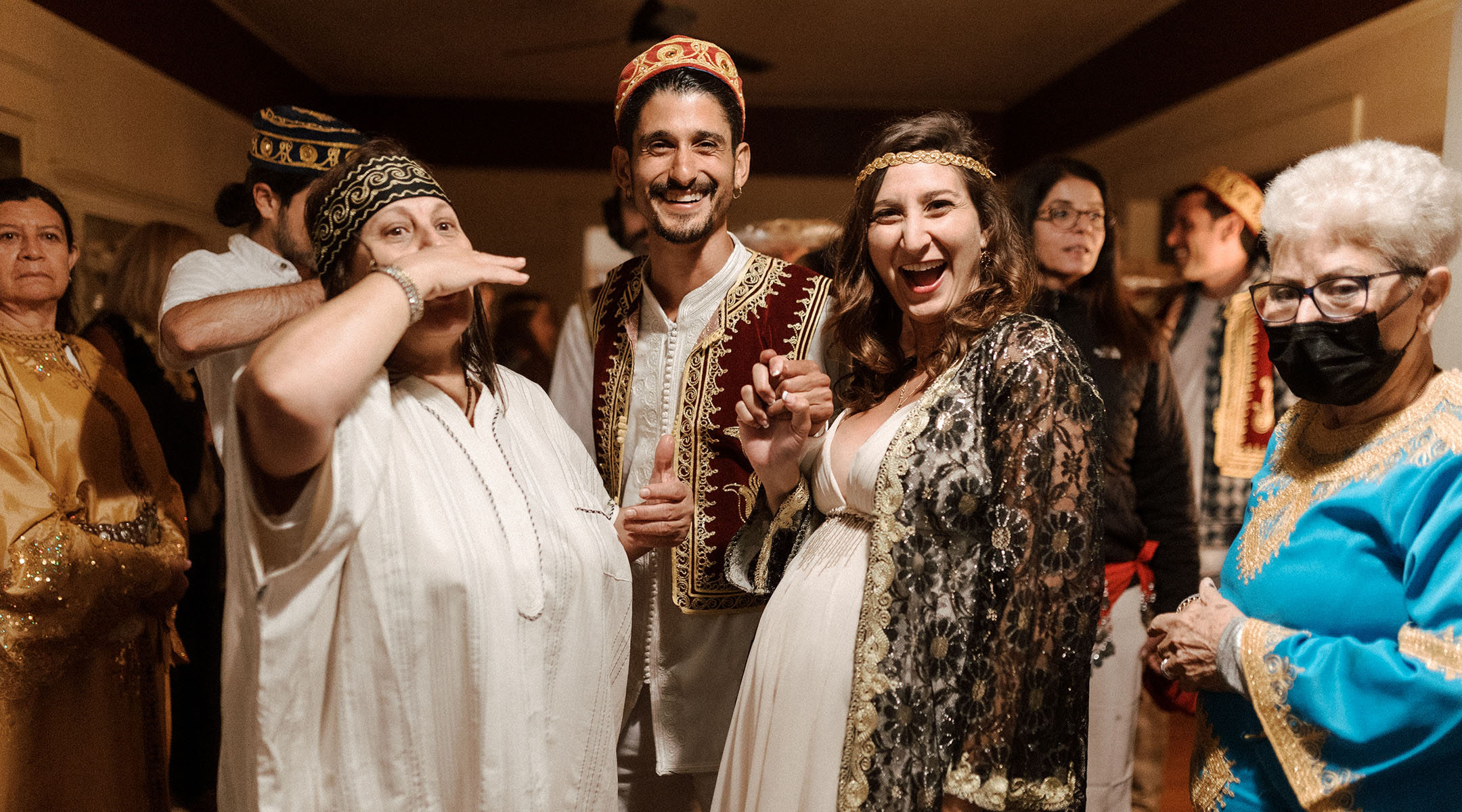 The night before their wedding, Haberer and Aboody, both of whom have Sephardic ancestry, held a Moroccan-themed party. (Luna Munn Photography)

Aboody and Haberer infused their wedding with both Jewish and earthy values.

Next to the chuppah were two altars, one displaying photos of their ancestors and the other laden with local fruit and flowers, challah and stalks of wheat in honor of the harvest festival Shavuot, which started the same day. As the groom processed to meet the bride before the ceremony, several men blew shofars, a frequent Wilderness Torah ritual. In homage to Haberer’s early childhood on Kibbutz Tzora in Israel, the couple both wore flower crowns and dressed in all white. During the ceremony, led by a rabbinical student and mindfulness coach named Rebecca Schisler, the couple was wrapped in a tallit while a friend sang the priestly blessing and guests lifted their hands to bless them. The night before, a lamb from a farm nearby had been cooked over a fire.

For many guests, this was their first experience with earth-based Judaism, and the attention to detail — from the ketubah, or marriage contract, made from specially procured animal skin (illustrated by one artist friend and scribed by another, both of them women), to knowing the farm on which the lamb had been raised — stood out.

“It wasn’t just us observing their love,” said Maytal Orevi, a family friend of the bride. “Though different worlds were colliding, they brought everyone in and invited us to slow down. We all got to be a part of their world.” 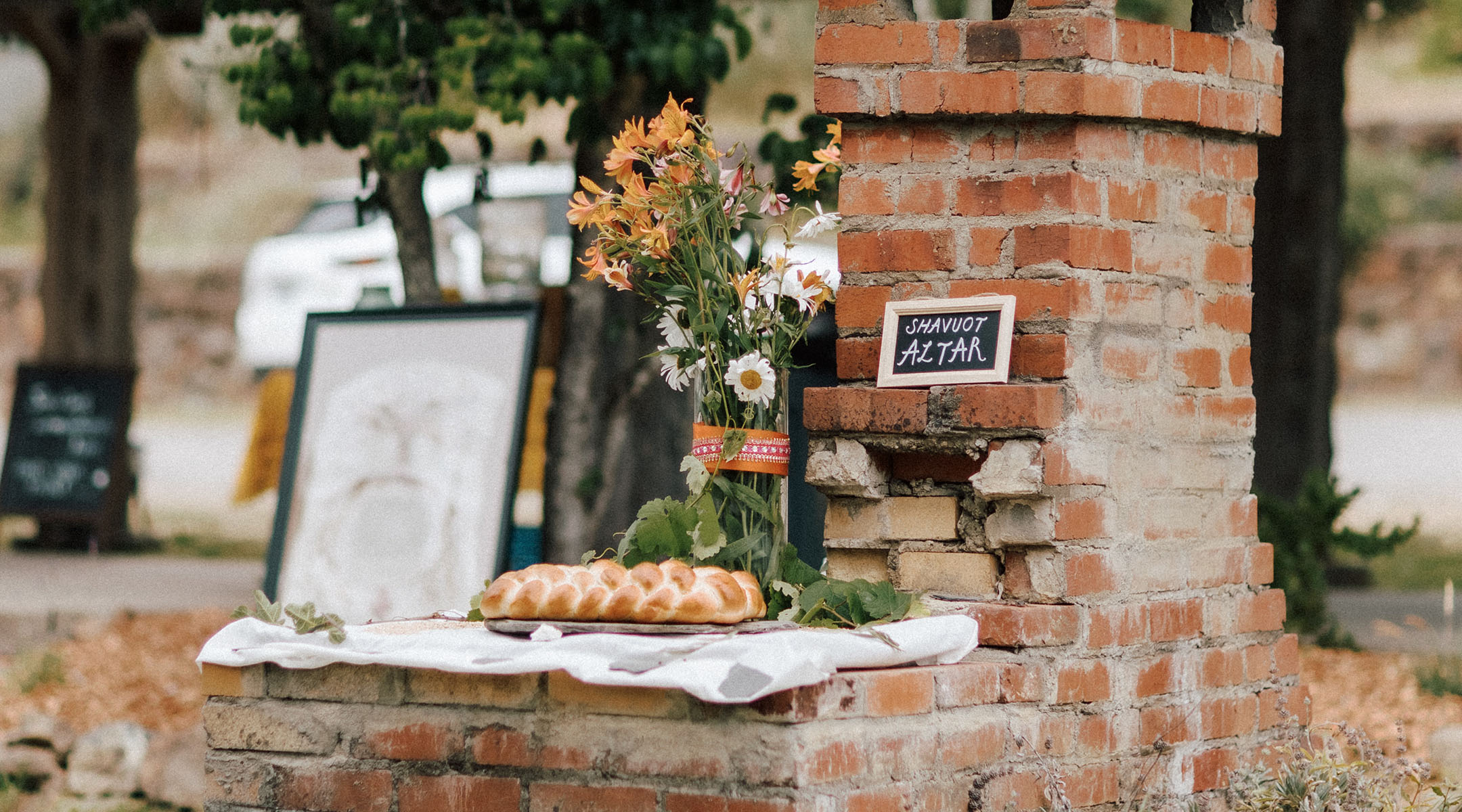 As the wedding was held on Shavuot, there was an altar with a Shavuot theme, with stalks of wheat and fruits and vegetables and flowers grown nearby. (Luna Munn Photography)

In 2016, after their first meeting, Aboody and Haberer both began working for Wilderness Torah, and quickly became close friends. In addition to their love of the earth, the two shared mixed Mizrachi and Ashkenazi heritages: Haberer’s mother is Moroccan-Israeli while his father is South African, and his family moved from Kibbutz Tzora to St. Louis when he was 5. Aboody’s father is Iraqi-Israeli, and her mother, Cindy Paley, is a Yiddish folksinger; she grew up in the Los Angeles area.

They remained close even as they moved on to other work. Aboody now works as a doula, herbalist and outdoor educator, and Haberer is a permaculture consultant, in addition to running groups for men interested in unpacking masculinity, such as an initiative for Shalom Bayit, a domestic violence prevention organization, called “MenschUp.”

In 2021, they both found themselves at a Wilderness Torah festival for Rosh Hashanah, sharing hopes for the new year in the same prayer circle.

“I was really clear that I want love, partnership, and family,” Aboody said. 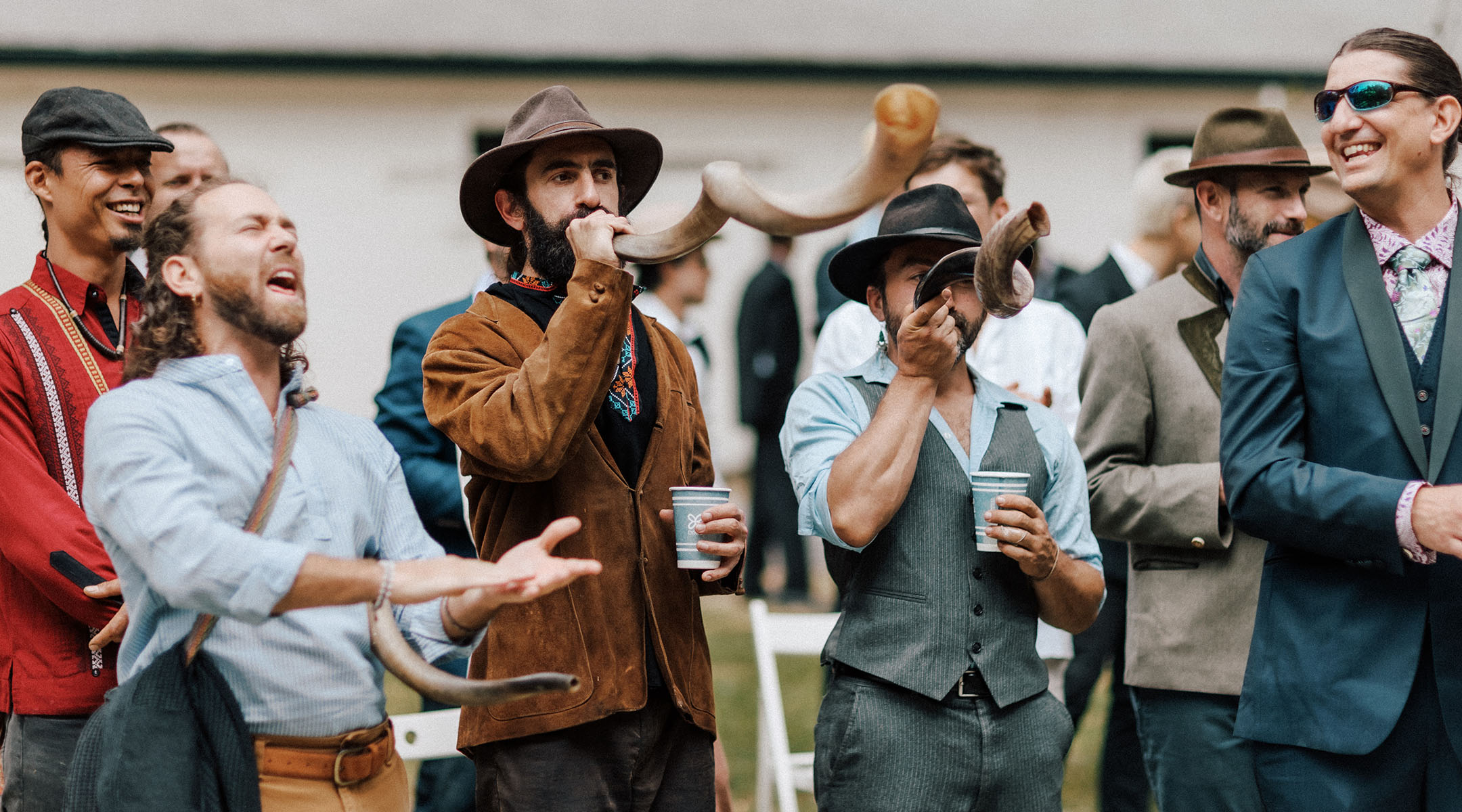 As part of the men’s tisch, or gathering before the ceremony, men blew shofars, a tradition at Wilderness Torah weddings. (Luna Munn Photography)

Haberer, sitting in the same circle and watching various young families wandering the grounds, realized he did, too.

“There was already this palpable tension there,” Aboody said, “as we realized if we wanted the same things at the same time …”

Three months later, Aboody was pregnant. Love, partnership and now family: what each had been praying for.

They decided to get married on Shavuot, the Jewish harvest holiday that celebrates the “first fruits” of the season, a particularly apt occasion as they planned for their first child.

This year, Shavuot began immediately after Shabbat. They signed the wedding contract Friday afternoon, to avoid signing it on the holiday, and held a Kabbalat Shabbat prayer service Friday night. 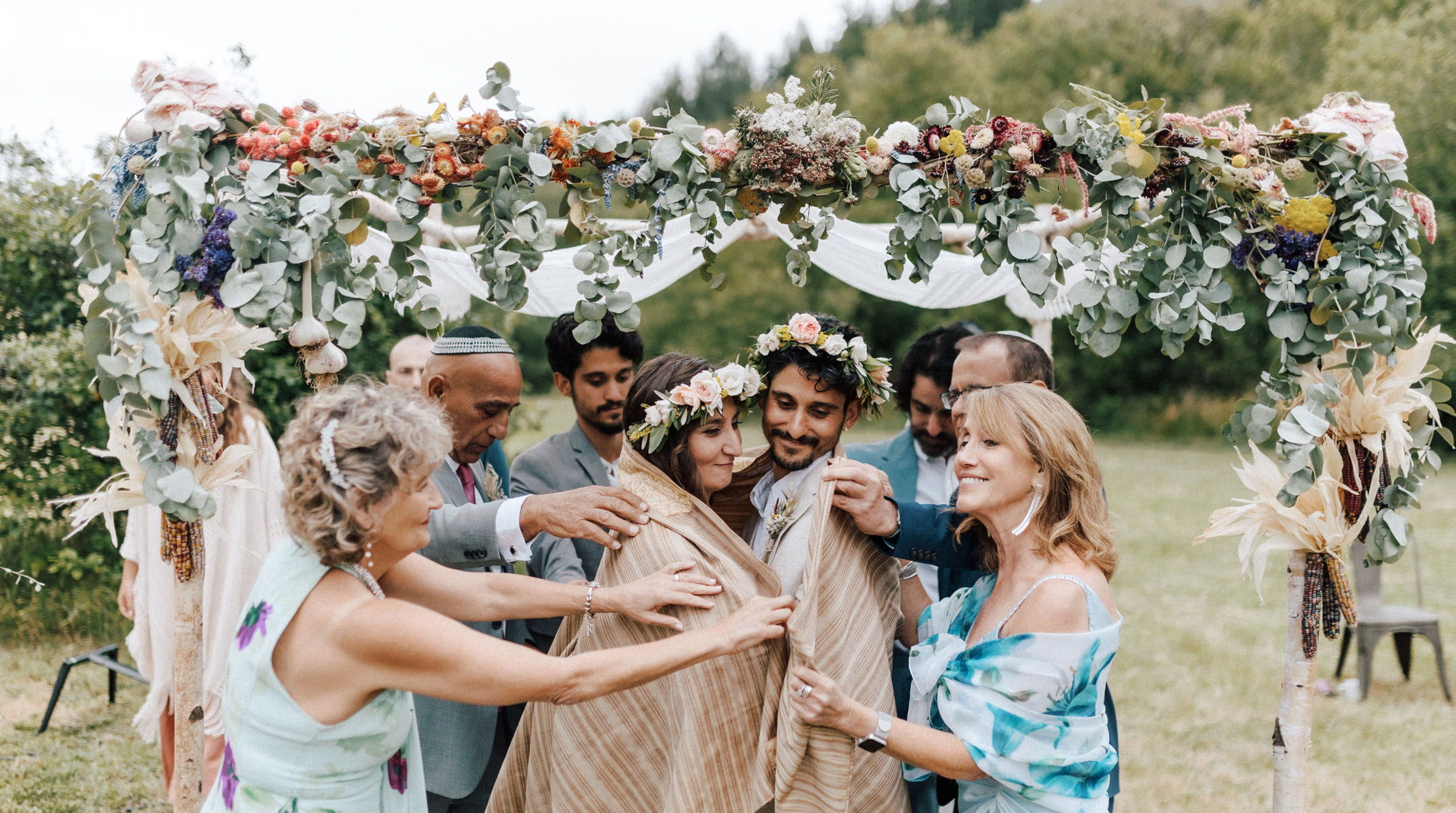 The couple were wrapped in a tallit held by their families during the priestly blessing. (Luna Munn Photography)

After the service was a henna party with singing and dancing, where some guests wore Moroccan caftans and the bride and groom had thick dashes of henna applied to their palms, to protect them from the evil eye. A Moroccan feast, largely cooked by Haberer’s mother and aunts, was served.

Susan North Gilboa, a family friend of the bride, said that as a more traditional Jew, she wondered about attending a wedding on Shavuot, when, as with other holidays including Shabbat, weddings are prohibited under Jewish law. But the Shavuot themes were woven in “with such spirituality, and real attention to tradition while also bringing in the new, that it made it feel so right.”

Though their romantic relationship progressed quickly, the couple sees it as building on their six years of friendship. Haberer likened it to shmita, the biblical edict to let the land rest, or lie fallow, every seven years. This year happens to be a shmita year, which the couple saw as particularly fitting.

“We’ve had six years of getting to know each other as friends and supporting each other in our different relationships,” Haberer said. “On the first day of the seventh year, the shmita year, we see ourselves resting into a romantic partnership. We love that we started the shmita year that way.”

This story is part of JTA’s Mazels series, which profiles unique and noteworthy Jewish life events from births to b’nai mitzvah to weddings and everything in between.

Mazels: Tell Us About Your Life Milestones

BlenderBot, Meta’s AI chatbot, really, really wants you to check out its synagogue