The world mourned for Notre Dame. But France still struggles to accept French Jews and Muslims.

(JTA) — On April 15, Notre Dame burned. The grief wracked not only Paris and the French nation, but quickly reverberated around the world.

Under the gaze of its crumbling gargoyle guards, Notre Dame has witnessed nearly a millennium of Parisian history. Its altar was a site for the weddings of kings and queens. Napoleon Bonaparte crowned himself emperor beneath its buttressed ceiling. In 1944, celebrations marked the end of the German occupation.

Underneath the stories of heartbreak over a global architectural wonder scarred by flames, however, is a story of contemporary social fissures in France that reach far beyond an island on the Seine. The wounded cathedral reveals France’s deepest cultural rift: the divide between France and its religious minorities.

Today, Notre Dame is both a working religious sanctuary and among the most visited tourist sites in the world. The banality of Catholicism in France allows the cathedral to be seen as alternatively religious and cultural, and therefore connected to both Christian and secular French identities.

Still, the paradox of a cathedral rising as an icon of contemporary French national culture cannot be overlooked in a country where “laicite” – the strict separation of religion and state – reigns. Christianity is an unquestioned part of European social life, whereas other religions are not.

French secularism in the form of laicite was enacted as law in 1905. It did not, however, resolve religion-based tensions. At the very same time, France became embroiled in the Dreyfus Affair, with the Jewish Capt. Alfred Dreyfus wrongly accused of espionage in a blatant, public act of anti-Semitism revealing deep national divides. Anti-Semitism has remained a part of French society since: Historically it has been linked to conservative movements, including those championed by the Catholic Church, and today is increasingly grounded in the far left and far right.

France is home to both the largest Jewish (600,000) and largest Muslim (5.7 million) populations in Europe, the latter a result of large-scale postcolonial migration from Morocco and Algeria whose migrants arrived in France, like my Jewish mother, in the 1960s.

Today, laicite appears in the news almost exclusively in relation to Islam. Beginning in 1989, a lasting controversy nicknamed “the headscarf debates” ensued, as Muslim girls were suspended or expelled from schools across the country for refusing to remove their headscarves. In 2004, all conspicuous religious symbols were outlawed in public schools across the country. In 2015, Sarah, a young girl from Charleville-Mézières, even made The New York Times after being suspended twice for wearing not a headscarf but a long black skirt – “an ostentatious sign” of her religious belief.

In 2016, numerous beach towns in France banned burkinis, a body-concealing swimsuit. A dystopian moment involving police officers in Nice who forced a woman to remove her modest clothing was caught on camera. In 2017, the far-right presidential candidate Marine Le Pen built her campaign around demonizing Islam, comparing Muslim prayers to the Nazi occupation of France. She stood behind the “eat pork or go hungry campaign,” which pressures schools to stop offering alternative meals to their Muslim (and, arguably, Jewish) students.

Jews are targeted as well by re-emerging ethno-nationalist discourses that cut across the political spectrum. Desecrated cemeteries and spray-painted swastikas have become increasingly common. In 2018, the same year that Holocaust survivor Mireille Knoll was murdered in her Paris apartment, anti-Semitic incidents in France rose 74 percent.

While anti-Semitism is largely blamed on France’s Muslim populace, both anti-Semitic and anti-Muslim sentiment is stoked by politicians on the right and the left. Communist parliamentarian leader Andre Gerin sparked the debate that ultimately led to France’s niqab ban, citing “scandalous practices hidden behind the veil.” When I visited Paris in February, the so-called yellow vests attacked Jewish philosopher Alain Finkielkraut in the center of the city.

“Dirty Zionist, you’re going to die!” they declared. “France is ours.”

Who are “we” and what is “ours” when many Muslims and Jews don’t feel secure in France?

Notre Dame resides on an island in the center of Paris, between the right and left banks. The global solidarity that its partial destruction has invoked creates a powerful image as France – like much of Europe – grapples with rising discontent from both the left and the right. Its burning shines a light on a raw reality of contemporary French society: longing for redemption through a stagnant, mythic past – and an enduring incapacity to include its religious minorities.

The Jewish-German philosopher Walter Benjamin spent his last days wandering through 1940s Paris, a city that stole his heart but ultimately betrayed him, as he perished fleeing the occupation of the city by the Nazis. In his writings of the metropolis and beyond, Benjamin argued that every destruction unleashes the potential to construct something new.

The scarred Notre Dame Cathedral, if not “ours,” is emblematic of human history – its crumbling and renovation, its unstoppable dynamism, that heartbreak can give way to promise. And perhaps in this moment of reconstruction, France can forge a place in its culture for religious minorities: redemption sought through neither stagnancy nor division. 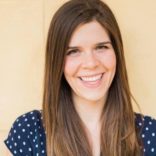 is a sociologist and currently a postdoctoral fellow on the Religion & Its Publics project and the Institute for Advanced Studies in Culture at the University of Virginia. She is completing her academic book, Unsettled Islam, based on over 2.5 years of research in European mosques and has published in numerous mainstream outlets on religion and pluralism, including The Washington Post, Frankfurter Allgemeine Zeitung, and Tablet Magazine.
The views and opinions expressed in this article are those of the author and do not necessarily reflect the views of JTA or its parent company, 70 Faces Media.