The Western Wall ‘spit out a stone,’ and some see a message from above 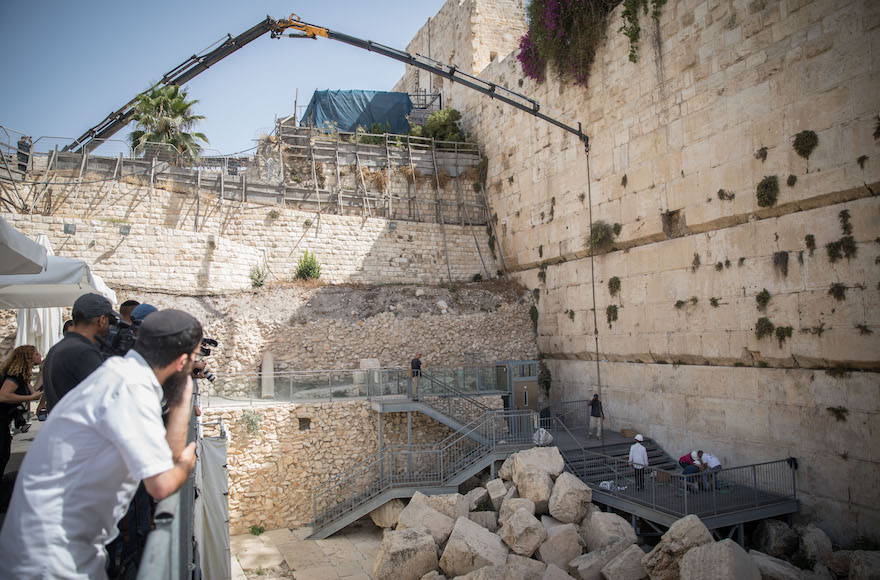 A crane works to remove a large chunk of stone dislodged from the Western Wall in Jerusalem at the mixed-gender prayer section, July 25, 2018. (Hadas Parush/Flash90)

(JTA) — The heavy stone that fell out of the Western Wall and came crashing down on a platform set aside for egalitarian prayer has been removed for examination and restoration, but the conversation about the reason for its sudden sky dive — including hints of divine intervention — keeps on going.

The stone fell on Monday morning, hours after the area had been full of worshippers visiting the wall for Tisha b’Av, 25 hours of intense mourning for the destruction of the two Holy Temples in Jerusalem. The Western Wall was an external retaining wall for the Second Temple, which was razed by the Romans in 70 C.E.

A lone worshipper was praying at the site, known as the Ezrat Yisrael near Robinson’s Arch at the southern end of the wall, when the stone fell. Daniella Goldberg, 79, was not injured, though she was shaken up a bit. And she seemed to be dressed in the garb of an Orthodox worshipper: Every strand of hair covered, long sleeves, a long skirt and stockings in the summer heat. She said she prays regularly at the site — set at a remove from the iconic plaza that fronts the Wall — and told Israeli television that she would try not to let the incident “distract” from her prayers.

Israeli archaeologist Zachi Dvira almost immediately said the 2,000-year-old wall was badly in need of restoration, and that its massive limestone blocks had to be reinforced.

But some saw theology, not erosion, at play in the near disaster. Rabbi Shmuel Rabinovitch, the rabbi of the Western Wall, called for public “soul searching” in the wake of an incident he saw as “unusual and most rare.”

“The fact that this powerful incident happened a day after the 9th of Av fast, in which we mourned the destruction of our temples, raises questions which the human soul is too small to contain, and requires soul-searching,” he said.

Rabinovitch did not point fingers — unlike the deputy mayor of Jerusalem, Dov Kalmanovich. At first, Kalmanovich said, “We must not explain and interpret natural phenomena as signs from heaven, as the ways of the Creator are hidden.” Then he did a 180, blaming the activists who want women and non-Orthodox Jews to be able to pray as they wish at the Orthodox-controlled Wall.

“The falling of one of the Western Wall stones, so close to Tisha b’Av, and exactly at the location of the controversial prayer area, should be a red light for us all,” he said. “I suggest that Reform leaders, Women of the Wall and the other quarrel-mongers examine themselves, and not the Wall.”

Kalmanovich, who – interesting side point – was the first person attacked in the first intifada in 1987, is not the only person to feel this way. A quick perusal of several religious and mainstream news websites showed similar sentiments from rabbis and laypeople.

Alden Solovy, an author and teacher who supports efforts by Reform Jews to pray as they wish at the Western Wall, took a different tack.

“On Tisha b’Av, God revealed a deep love of Reform Jews,” he wrote in a blog post. “With a mighty hand and an outstretched arm, God held back a stone from falling from the southern Western Wall onto liberal Jews worshipping below. The stone was, indeed, destined to fall — as it did on Monday — but God held the stone back until no one would be hurt.”

Solovy noted that had the stone fallen on Saturday night, when hundreds of worshippers and visitors were standing near that part of the Wall, “the results could have been catastrophic.”

“Clearly, God held back the stone to save some beloved Children of Israel,” he wrote.

A facetious tweet by Rabbi Danya Ruttenberg, an author in Brookline, Massachusetts, subtly suggested that the Israeli government and the people that put them there could be at fault. The stone fell after a week in which Israeli lawmakers passed a controversial nation-state bill, as well as a law that denies surrogacy rights to same-sex couples.

“They say the Temple was destroyed by free-flowing hatred,” Ruttenberg wrote. “The day after (or day of? Not sure when this happened) Tisha b’Av during a time when Israel’s been passing bills that are racist, homophobic, and anti-democratic, the Western Wall spit out a stone.”

She immediately clarified: “OK, all, my theology doesn’t actually include a God who finds parking spaces or gives cancer or makes the right team win. Pretty sure it’s up to us to do the work to care for one another down here. I am officially labeling this a facetious tweet bc some people can’t get subtlety.”

The entire expanse of the wall will now be inspected for other loose rocks, as archaeologists discuss the best way to prevent another such incident. Religious leaders reportedly also will be consulted — not on the causes of the falling stones but on the spiritual sensibilities that must be taken into account during preservation work.

The award for the best response should probably go to the archaeologist Meir Ben-Dov, one of the original excavators of the Robinson’s Arch area. In an interview with The Times of Israel, he made it clear how little significance he attached to the stone’s plummet to earth.

“So a rock fell — so what!” Ben-Dov said. “The State of Israel hasn’t ended, the Messiah won’t come because of this.”