The Trump team’s Middle East peace plan: It’s beginning to look a lot like one state 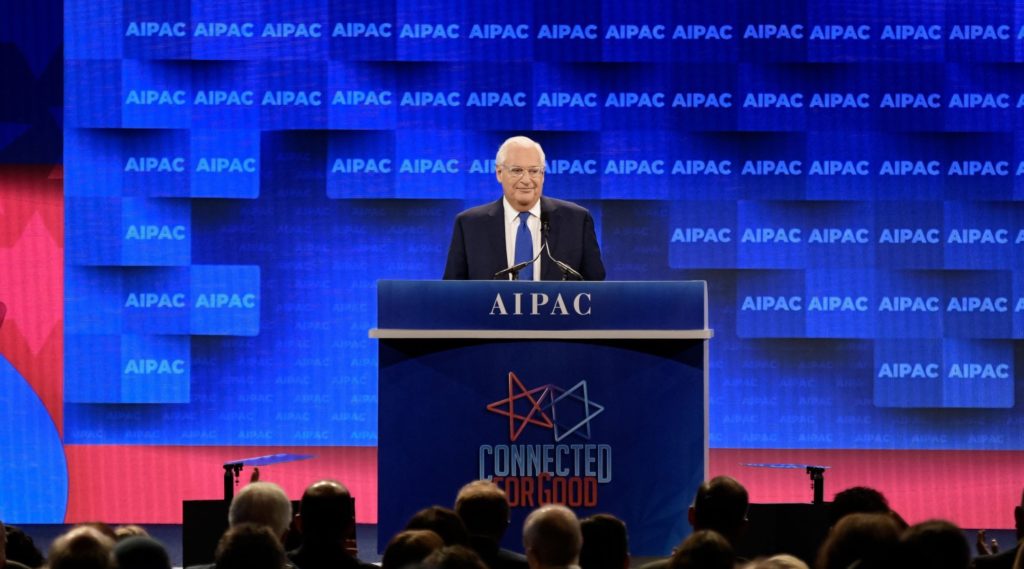 WASHINGTON (JTA) — Trump administration officials have been silent and notably leak-free about what exactly is in the Middle East peace plan that Trump’s son-in-law, Jared Kushner, is shaping — until now.

This week, in speeches to the American Israel Public Affairs Committee, it became clear that the plan will likely not accommodate a Palestinian state, or at least the sovereignty that attaches to statehood.

David Friedman, Trump’s ambassador to Israel and one of three members of the peace team, in his AIPAC speech outlined why Israel should seize the opportunity of the still-to-be-seen peace plan: It allows Israel to maintain security control of the West Bank, and a future U.S. administration might not be so understanding.

The Jewish Telegraphic Agency asked Jason Greenblatt, Trump’s top Middle East negotiator and the third member of the Kushner peace team, whether this meant that Israeli control of the West Bank was in the deal, as opposed to a Palestinian state making its own defense and foreign policy decisions.

“I’m not going to address speculation of what may or may not be in the plan,” he replied in an email. That was like his replies to many previous inquiries from reporters about anonymously leaked details. This time, however, the question was about on-the-record remarks by one of the plan’s architects to a hall packed with 18,000 activists.

The next day, House Appropriations Chairwoman Nita Lowey, D-N.Y., asked Secretary of State Mike Pompeo three times if the Trump administration believed in the two-state solution. Each time he demurred.

Instead, Pompeo in his Hill testimony referred to the other big Israel and territory news this week: Trump’s formal recognition of Israel’s sovereignty in the Golan Heights, which like the West Bank was captured in the 1967 Six-Day War.

“We believe this increases the likelihood that we get resolution of the conflict between Israel and the Palestinians,” Pompeo said. “We think it speaks with the clarity that takes this away from any uncertainty about how we’ll proceed.”

Tamara Cofman Wittes, a top Middle East policy official in the Obama administration, said she was able to read two possible meanings into what Pompeo meant by “clarity.”

“One is that [it] relates to the content of the Trump peace plan,” suggesting that the plan will recognize Israel’s claim to at least part of the West Bank, said Cofman Wittes, a senior fellow in the Center for Middle East Policy at the Brookings Institution. “The other is that it relates to what will happen if the Trump peace plan is not accepted” by the Palestinians — the United States would greenlight an Israeli annexation.

(Spoiler alert: The Palestinians, already snubbing administration officials since Trump recognized Jerusalem as Israel’s capital in 2017, are not likely to accept a plan that keeps Israeli troops in the West Bank.)

Pompeo, asked whether the United States would now recognize other countries’ annexation of occupied lands, said “absolutely not.” (A number of pundits have said the Golan recognition could embolden Russia to do the same in Crimea.) However, in defending recognition of the Golan as Israeli territory, Pompeo seemed to set out the case Israel could invoke in annexing the West Bank.

“Israel was fighting a defensive battle to save its nation, and it cannot be the case that a U.N. resolution is a suicide pact,” he told reporters Thursday, apparently referring to Security Council Resolution 242 immediately following the 1967 war, which established the land-for-peace principle in the Israeli-Arab conflict.

It was a message that Israeli Prime Minister Benjamin Netanyahu echoed almost precisely the day before.

“There is a very important principle in international life,” he said. “When you start wars of aggression, you lose territory, do not come and claim it afterwards. It belongs to us.”

“It sounds like the Trump administration has no interest in advancing a contiguous completely sovereign Palestinian state,” Dahlia Scheindlin, a policy fellow at Mitvim-The Israeli Institute for Regional Foreign Policies, told JTA.

That would be consistent with policies that Scheindlin said the Netanyahu government is advancing: expanding existing settlements, creating greater access between the settlements and Israel within the Green Line, and limiting Palestinian construction of Area C of the West Bank, the area that is still under total Israeli control.