The Tell: As the Ukraine scandal brewed, Trump had some pretty strong things to say at the UN

WASHINGTON (JTA) — The news that gobbled up our attention this week was obviously impeachment,

For anybody that possibly missed it, an intelligence community whistleblower accused President Donald Trump of extorting help from Ukraine to smear his political rival, former Vice President Joe Biden.

Are there Jewish angles? Why yes.

Nancy Pelosi, D-Calif., the speaker of the U.S. House of Representatives, launched an impeachment inquiry, something she had been reluctant until now to do. Nudging her across the Rubicon were centrist Democrats with national security experience who had been in the “no” column until the latest allegation, among them two Jewish Democrats, Elissa Slotkin of Michigan and Elaine Luria of Virginia.

Meanwhile at the United Nations

While all that impeachment stuff was happening, Trump was meeting with world leaders, including Ukraine President Volodymyr Zelensky, at the General Assembly opening.

“Other than that, we weren’t too busy over the last three days. And, unfortunately, the press doesn’t even cover it,” he said.

POTUS had a point. It was a consequential week at the United Nations, and it’s worth at least a quick review of some of the developments:

1. Beware of “evil” globalists: A big chunk of Tuesday’s United Nations speech was about the perils of open borders, and it was framed as a broadside against “globalists.” (Trope or not a trope? Check out Ben Sales’ primer.)

“Today, I have a message for those open border activists who cloak themselves in the rhetoric of social justice: Your policies are not just. Your policies are cruel and evil. You are empowering criminal organizations that prey on innocent men, women, and children. You put your own false sense of virtue before the lives, wellbeing, of countless innocent people. When you undermine border security, you are undermining human rights and human dignity,” he said.

Melanie Nezer, the senior vice president for public affairs of HIAS, the lead Jewish immigration advocacy agency, told me in an email that Trump’s comments were “irresponsible” and “dangerous.”

“President Trump’s comments not only demonize refugees and immigrants,” she said, “but the Americans who show concern for them and who lawfully express their views.”

The issue hits close to home for HIAS: The man who murdered 11 Jews in The Tree of Life synagogue complex cited among other reasons false rumors that HIAS and George Soros, the billionaire Jewish philanthropist, were funding non-governmental organizations that partnered with human traffickers in encouraging Central American migrants to invade the United States. HIAS had partnered with one of the Tree of Life-based congregations in assisting refugees settled in the Pittsburgh area.

Trump got flak at the time for peddling the same theory regarding Soros and the NGOs. (He did not specifically mention HIAS.) The president and his defenders have refuted claims that his rhetoric fuels bigotry, noting his strong repudiations of anti-Semitism in comments after the massacre.

David Schenker, the assistant secretary of state for Near East Affairs (and a longtime analyst for the Washington Institute for Near East Policy) told reporters ahead of U.N. week that there was more to come.

“We are going to increase pressure on Iran,” Schenker said.  “We want to bring them to the table to get a better deal on nuclear and a deal that encompasses ballistic missiles and change in Iran’s malign, destabilizing, reckless behavior.”

In his U.N. speech, Trump noted the squeeze and cited the Iranian regime’s anti-Semitism in urging Israel and its Arab neighbors to go for full and normalized relations.

But he stopped short of threatening any military action.

Secretary of State Mike Pompeo sounded a more hawkish note this week at a conference of the United Against a Nuclear Iran group, chaired by former Sen. Joe Lieberman. Pompeo, notably, called the allegedly Iranian-backed strike on the oil facilities an “act of war.”

It’s worth asking whether Trump shares that outlook. In his U.N. speech, Trump said, “America knows that while anyone can make war, only the most courageous can choose peace.”

Trump would not count out a meeting in New York with Hassan Rouhani, the Iranian president, although he said it was unlikely. French President Emmanuel Macron was trying hard to make it happen, telling Rouhani in an encounter that not meeting Trump would be a “lost opportunity.”

3. Erdogan pulls a Netanyahu: Israeli Prime Minister Benjamin Netanyahu was unable to attend this year’s General Assembly, mired as he is in trying to form a governing coalition. Speaking in his stead was Foreign Minister Yisrael Katz, but there was another surprising stand-in: Turkish President Recip Tayyip Erdogan came with diagrams, as Netanyahu has done in the past. During his speech, Erdogan displayed an array of maps showing what he said was Israel’s expansionism.

The Mayor and the Minister

Pete Buttigieg, the South Bend, Indiana, mayor seeking the presidency who is known for his caution and his appeals for folks to get along, has a Farrakhan problem. Deven Anderson, a regional organizer for Buttigieg in South Carolina, has indulged in Farrakhan fanboy quotes on social media.

Will impeachment be an issue in congressional elections? It likely will be in New York’s 1st District, where Perry Gershon, a financier who says he was moved to political candidacy after visiting the U.S. Holocaust Memorial Museum following Trump’s 2016 election, is mounting a second challenge to incumbent Rep. Lee Zeldin, one of two Jewish Republicans in the House. Yes, if Gershon clears the primary this will be a Jew on Jew race, and Gershon is making it about Trump, as he did in 2018 when he came closer than any of his predecessors to beating Zeldin.

In response to the declassified transcript of the call between Trump and Zelensky, Zeldin said “Absolutely ZERO grounds for impeachment” and agreed with Trump that if anyone deserved investigation, it’s Biden.

“This is absurd how Congressional Dems and many in media are trying to spin this all!” Gershon responded on Twitter: “It pains me to see how @RepLeeZeldin can read the same transcript I did and see no impropriety.”

Minnesota not so nice

What’s in the water of all those lakes? First, Rep. Ilhan Omar, progressive democrat of Minnesota, gets into trouble (and kind of apologizes) for insinuating that pro-Israel Americans have dual loyalties. Now it’s a conservative Republican candidate for Senate, Jason Lewis, who has made the same allegation. 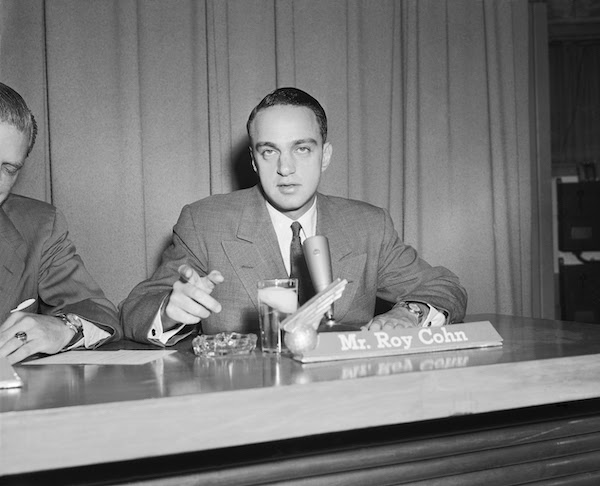 Roy Cohn, the Joe McCarthy protege famed for his no-holds-barred politics and a life and career that ended in disgrace, was an early adviser to Trump. He has become an object of fascination for that reason decades after his death. The latest iteration is a well-reviewed documentary by Matt Tyrnauer, “Where’s my Roy Cohn?” (a title drawn from something Trump is said to have recently wondered out loud). At The New Yorker, Naomi Fry says “Cohn reflected the social and political conditions in which he operated.” Maureen Dowd at The New York Times hones in on a story involving Cohn’s mother that qualifies as the most harrowing Passover tale since, well, that thing with the firstborn.

Rabbi Danya Ruttenberg is a social media responsa machine, taking all questions Jewish, including whether 5780 means we’ll be reliving a certain big-haired decade.