The Tell: 2 senators reach across the aisle to tackle the Syria nightmare

WASHINGTON (JTA) — Michael Oren writes of being in a reverie on Sept. 30, 2013, his last day as Israel’s ambassador to Washington, when he heard President Barack Obama tell his boss, Prime Minister Benjamin Netanyahu: “If war comes, we’re with you, because that’s what the American people want.”

In an interview this week with The New York Times, Oren recalled the moment, although Obama’s remarks were worded a bit differently: “If Israel ever got into a serious war, of course the U.S. would intervene because that’s what the American people expect.”

“I don’t think Israel can bank on that today,” Oren, a historian before he was a diplomat, and a Knesset member afterward, said of Obama’s guarantee that the United States would have Israel’s back. “I don’t know now. And it’s enough to say I don’t know.”

His nostalgia for Obama was perhaps the starkest representation of how shocked Israel and its friends were by the Trump decision not to stand in the way of Turkish President Recep Tayyip Erdogan’s plans to take on Syria’s Kurds and settle millions of Syrian refugees in their region. That’s because “Ally” reads mostly as an excoriation of Obama and his perceived aloofness to Israel.

“Remarkable given Oren’s past overwrought, and sometimes racist, criticism of Obama,” said Andrew Miller, a former top Obama National Security Council official handling the Middle East file. “As I was leaving the NSC at the end of his administration, I was struck by how many regional leaders were gleeful at the prospect of a Trump presidency. How many feel that way today?”

Why are Israel and its supporters so bowled over by the decision? With Trump’s announcement coming just a day and a half before the start of Yom Kippur, there hasn’t been much time to formally consider the events, but here are some takeaways.

Israel’s greatest fear as the civil war in Syria winds down is that the Assad regime’s main backer and Israel’s deadliest enemy, Iran, will establish a permanent beachhead in the country.

“You’re going to be creating a vacuum in the region that was filled by us and our allies for the past several years that will be filled by Russia, Iran, Iranian-sponsored Shia militias, the Assad regime, no forces that are well disposed or friendly to the United States and some of which are potentially hostile to Israel,” Eric Edelman, an ambassador to Turkey and an undersecretary of defense in the George W. Bush administration, said in a conference call hastily convened just before Yom Kippur by the Jewish Institute for National Security of America, or JINSA.

“Right now, the U.S. presence helps to block Iran,” he said. “[Although] it’s not a formally declared target, it makes Iran think twice before it smuggles weapons into northeast Syria and keeps Iran out of that area. The departure of the U.S. isn’t good for Israel in that regard.”

You gotta have friends

There was some handwringing in Israel that the Jewish state was next in line. The New York Times quoted a Yediot Acharonot columnist, Shimon Shiffer, as saying, “The conclusion we draw needs to be unequivocal: Trump has become unreliable for Israel. He can no longer be trusted.” His column was headlined “A knife in our back.”

That was overwrought: While it’s true that Trump has divested his administration of pro-Israel advisers who had tried to stop a retreat from Syria, including his national security adviser, John Bolton, plenty of pro-Israel folks who back this move are still firmly ensconced in the administration, including Mike Pompeo, the secretary of state, and Trump’s top adviser and son-in-law, Jared Kushner. In addition, Congress remains robustly pro-Israel. The pushback Trump got from Democrats and Republicans alike in the wake of his abandonment of the Kurds would be tenfold were he to throw Israel to the wolves.

That misses a broader point, however, exemplified by the apocryphal answer that an Israeli prime minister gave to an American president when asked what the president could do for Israel. The Israeli replied that it’s what you can do for the United States that matters. In other words, U.S. leadership means more to Israel than whatever goodies it gets. (In some versions, it’s David Ben-Gurion speaking to John F. Kennedy, in others it’s Levi Eshkol speaking to Lyndon Johnson.)

That credo undergirded a tweet Thursday by Moshe Yaalon, a leader of Israel’s Blue and White party who is a former defense minister and military chief of staff.

“The abandonment of the Kurds to Turkish attack by the American government is a moral and strategic mistake,” Yaalon said. “A mistake that will grievously damage the status of the United States in the Middle East and in the world.”

Absent a robust U.S. investment in the region, the ties that Israel has cultivated carefully in recent years with Sunni Arab states — chief among them Saudi Arabia — through a shared animus toward Iran could easily diminish, as the Saudis and others decide it may be safer to accommodate Iran than to antagonize it.

Sunni Arabs already were wary of Trump’s disinterest in the region in the wake of his refusal to engage Iran militarily, even after it allegedly crippled Saudi oil output with a missile strike. The United Arab Emirates, which usually does today what the Saudis are thinking of doing six months from now, scaled back its presence in the war in Yemen against Iran-backed militias, and in August sent a delegation to Iran to discuss regional security.

Daniel Shapiro, a U.S. ambassador to Israel during the Obama administration, said the way that Trump’s decision came about signified chaos.

“It’s the chaos, the impulsiveness, the lack of any organized way of reaching a decision,” Shapiro said on Twitter. “True, Trump is sticking to his known views on pulling back from the Middle East. But the how is as important as the what.”

It’s not all gamesmanship in Washington and in Israel: Lawmakers and policy wonks on the left and the right were genuinely aghast at how casually Trump threw the Syrian Kurds under the bus.

Edelman in the JINSA phone call encapsulated the sense of shock.

“We don’t really know what transpired,” he said. “We only really have to go on the White House statement that was put out late Sunday night after the phone call” between Erdogan and Trump “and a series of tweets that the president has unleashed yesterday and today and a background phone call that the White House organized yesterday to try and explain what in fact had been decided but honestly it’s really quite confusing.”

The White House background call to which Edelman referred was indeed stunning: A senior administration official was tasked with bluntly stating that the Kurds were on their own and there wasn’t much the United States could do to prevent what happened next.

“I guess you’re presuming that Turkey is going to commit genocide against the Kurds,” the administration official said. “I mean, I don’t have any information that would suggest that. But the president has made it very clear. Again, I’ll say it again, and, you know, the president made this clear in a tweet that he would ‘obliterate the economy of Turkey’ if something of that nature occurs. So I think we’ve been very clear on that issue.”

Edelman was fairly certain that genocide was an option, saying the only time a Turkish government tried to move a million-plus people into Syria was in 1915 — “and that didn’t work out too well” — a reference to the Armenian genocide.

Also clear-eyed about the prospect of ethnic cleansing was Netanyahu, who in a statement said “Israel strongly condemns the Turkish invasion of the Kurdish areas in Syria and warns against the ethnic cleansing of the Kurds by Turkey and its proxies.” Netanyahu notably did not mention Trump.

Yaalon in his tweet suggested that Israel must fill the moral vacuum and “and find ways to help the Kurds in their time of need.”

“At the same time,” he said, “we must revive the sayings of our fathers — if I am not for myself, who am I?”

Sen. Lindsey Graham, R-S.C., otherwise one of Trump’s staunchest defenders, has excoriated the president over this decision and already has introduced legislation, along with a Democratic colleague, Chris Van Hollen of Maryland, that would introduce severe sanctions against Turkey until it withdraws its forces from the region. I’m told that Rep. Eliot Engel, D-N.Y., the chairman of the House Foreign Affairs Committee, is at work on a similar bipartisan bill.

It’s too early to say if the bills have pro-Israel backing — the American Israel Public Affairs Committee would not comment when I asked. Notably, however, the American Jewish Committee and the Anti-Defamation League have denounced Trump’s pullout.

Nita Lowey bowing out. Will bipartisanship go with her?

The Jewish New York Democrat, who chairs the House Appropriations Committee, said she will not run for re-election. Lowey, 82, stands out in Congress for her closeness to Kay Granger, R-Texas, especially in funding foreign operations, notably defense assistance for Israel. (I wrote in 2011 about how Lowey and Granger stood out in a polarized Congress.) It’s a reputation for crossing the aisle that does not attach to her likely successor as committee chair, Rep. Marcy Kaptur of Ohio, or her likely successor as subcommittee chair on foreign operations, Barbara Lee of California. Kaptur and Lee are J Street-endorsed Democrats and not close to AIPAC.

Bernie Sanders says he won’t let his heart attack last week slow down his campaign schedule. He’ll need to go all in: Elizabeth Warren, who with Sanders has staked out the progressive left-wing of Democrats running for president, is now leading in the polls.

The Trump administration’s Department of Homeland Security has pushed tracking white nationalists to the top of its to-do list, one of a number of changes in Jewish community and U.S. government practices and policies to take place since the massacre in Pittsburgh a year ago.

A number of Jewish Democrats swung Trump-leaning districts last year, and are now getting flak for backing impeachment proceedings. I attended a town hall run by Rep. Elaine Luria in her coastal Virginia district, which is heavy with Navy veterans like herself. 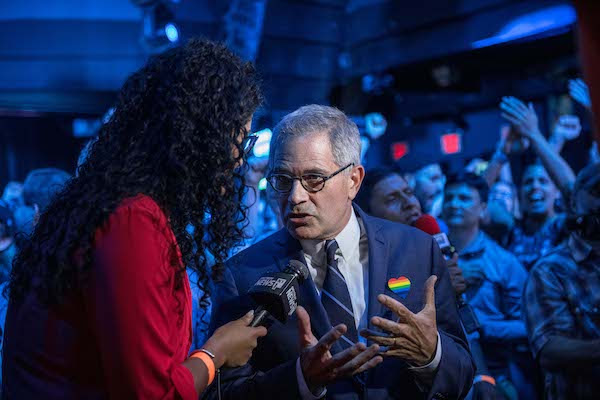 Akela Lacy at The Intercept covers the internecine warfare between two Jewish Democrats, Pennsylvania Attorney General Josh Shapiro and Philadelphia District Attorney Larry Krasner, over who is better positioned to combat gun violence in the city. Shapiro is a relatively moderate Democrat and Krasner is identified with progressive efforts to rehaul a system that has led to mass incarceration.

It’s that time of year again.
Have an easy fast, Jews.
And please hire @mollyjgordon & me for all of your holiday jingle needs.#YomKippur pic.twitter.com/xZT7gME3Rp

Ben Platt comes up with music for Yom Kippur that isn’t Kol Nidre.

Stay In Touch
Share your thoughts on The Tell, or suggest a topic for us. Connect with Ron Kampeas on Twitter at @kampeas or email him at thetell@jta.org.