The story behind Frank Sinatra’s $10,000 yarmulke

(JTA) — When a huge auction was held at Sotheby’s earlier this month of items belonging to Frank Sinatra and his wife Barbara, the item that made the most headlines was one of the smallest: a hand-knit yarmulke, owned by Frank, which was purchased for nearly $10,000 by an unknown party.

But untold, until now, was the story why Sinatra had a kippah, where and when he got it, and the memorable night nearly 40 years ago when multiple members of the Rat Pack were among the unlikely guests of honor at a fundraising dinner for a Jewish day school on the Jersey Shore.

The kippah was presented to Sinatra on an evening in May or June of 1981, at the old Teplitzky’s Hotel in Atlantic City. The occasion was the annual awards dinner held by the Hebrew Academy of Atlantic County, then located in Margate, N.J. And the man presenting the kippah to a tuxedo-clad Ol’ Blue Eyes was Samuel “Sonny” Schwartz, a longtime journalist, columnist, radio host and man-about-town in the Atlantic City area.

A photo of the occasion was shared with us by the late Schwartz’s daughter, Pauline, who said that a framed version of the photo hangs in her mother’s home to this day.

Each year at its gala, the Hebrew Academy would honor a Man of the Year. The Academy “would choose one person in the community who had made an impact on the community, and through this person’s connections we would be able to raise funds for the school,” remembers Rabbi Mordechai Weiss, the longtime principal of the Hebrew Academy. Sonny Schwartz was the honoree in 1980, which his daughter said was “a super-big deal for our family.” She remembers saying the Hamotzi blessing at that dinner along with the evening’s emcee, the Jewish comedian and Rat Pack fixture Joey Bishop. 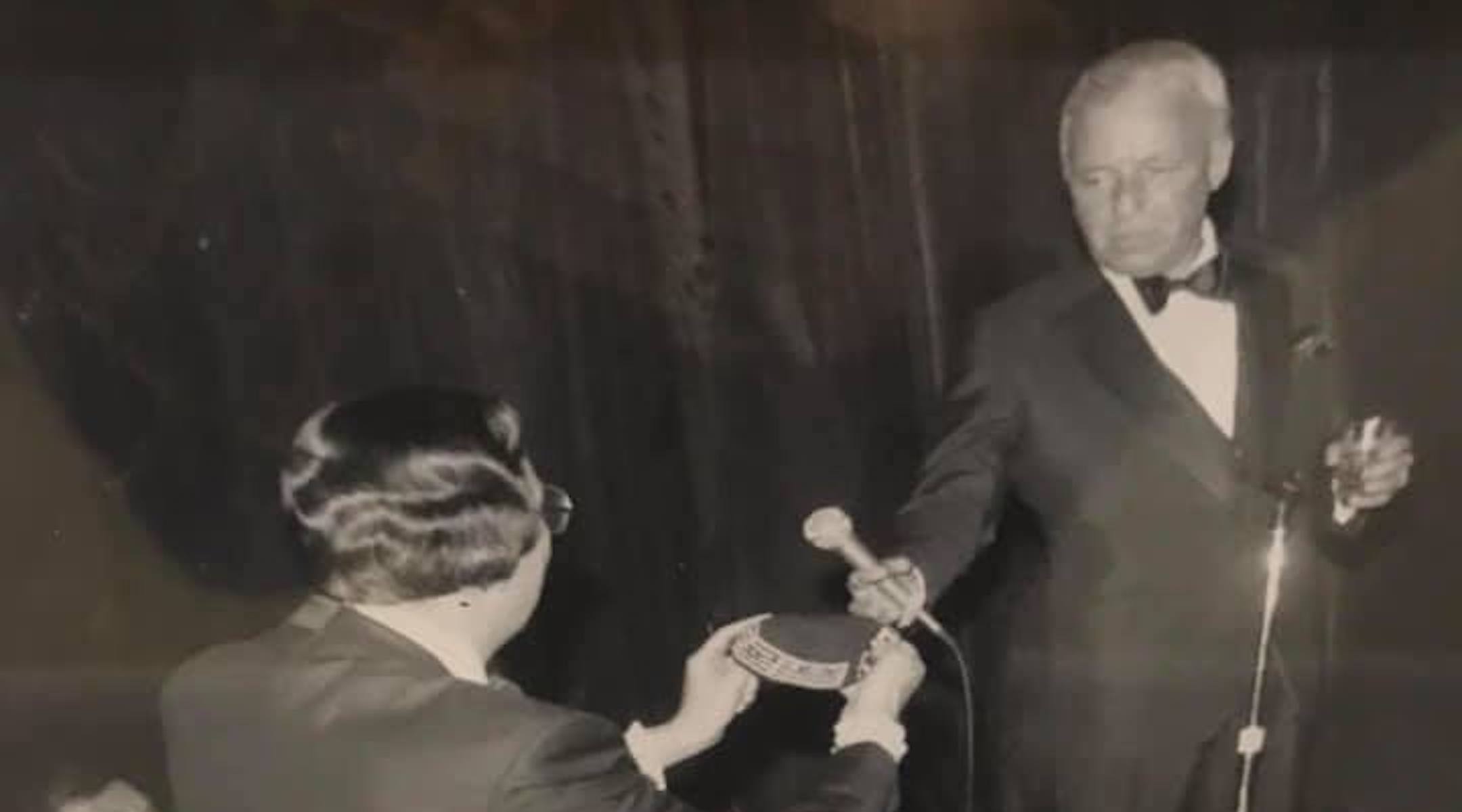 Sonny Schwartz, one of the organizers of a 1981 fundraiser for the Hebrew Academy of Atlantic County, N.J., presents Frank Sinatra with a personalized yarmulke at the event, held in a kosher hotel in Atlantic City. (Courtesy of Pauline Schwartz)

Schwartz was a main organizer of the dinner the next year, and the honoree was his close friend Paul “Skinny” D’Amato, the famed owner of the resort town’s 500 Club. D’Amato, among other accomplishments, is known for hosting in 1946 the first-ever performance by Jerry Lewis and Dean Martin. He also booked Sinatra during various lean times in the singer’s career.

D’Amato was one of the rare non-Jews to receive the honor. Another non-Jewish honoree a different year, according to Rabbi Weiss, was Ivana Trump, the then-wife of the future president. (Donald Trump, during his Atlantic City days, would appear on Sonny Schwartz’s radio show.)

For the occasion of the 1981 dinner, D’Amato brought along several of his showbiz friends.

“I remember the dinner very well,” Rabbi Weiss said. “At the dinner honoring Skinny, Jerry Lewis, Frank Sinatra and Sammy Davis Jr. appeared and Danny Thomas sent in a video which was played for all the patrons at the dinner. The entire ballroom was converted to a nightclub with a huge stage stretching almost the complete length of the ballroom. The children of the Hebrew Academy choir also performed that evening.

“I still remember the first joke that Jerry Lewis said at the dinner,” Weiss added. “He looked at Skinny straight into his eyes and said “Skinny! Teplitzky’s!”

It’s long been known that the Catholic, Italian-American Sinatra was a lifelong admirer of the Jews and a supporter of Jewish causes, going back to his childhood in northern New Jersey. He frequently visited Israel and he raised money for several buildings there that still bear his name.

When Frank appeared at the Hebrew Academy dinner, the singer was presented with a kippah, one emblazoned with “Frank” and musical notes. The kippah in the photo is, by all indications, the one that was sold in the Sotheby’s auction. 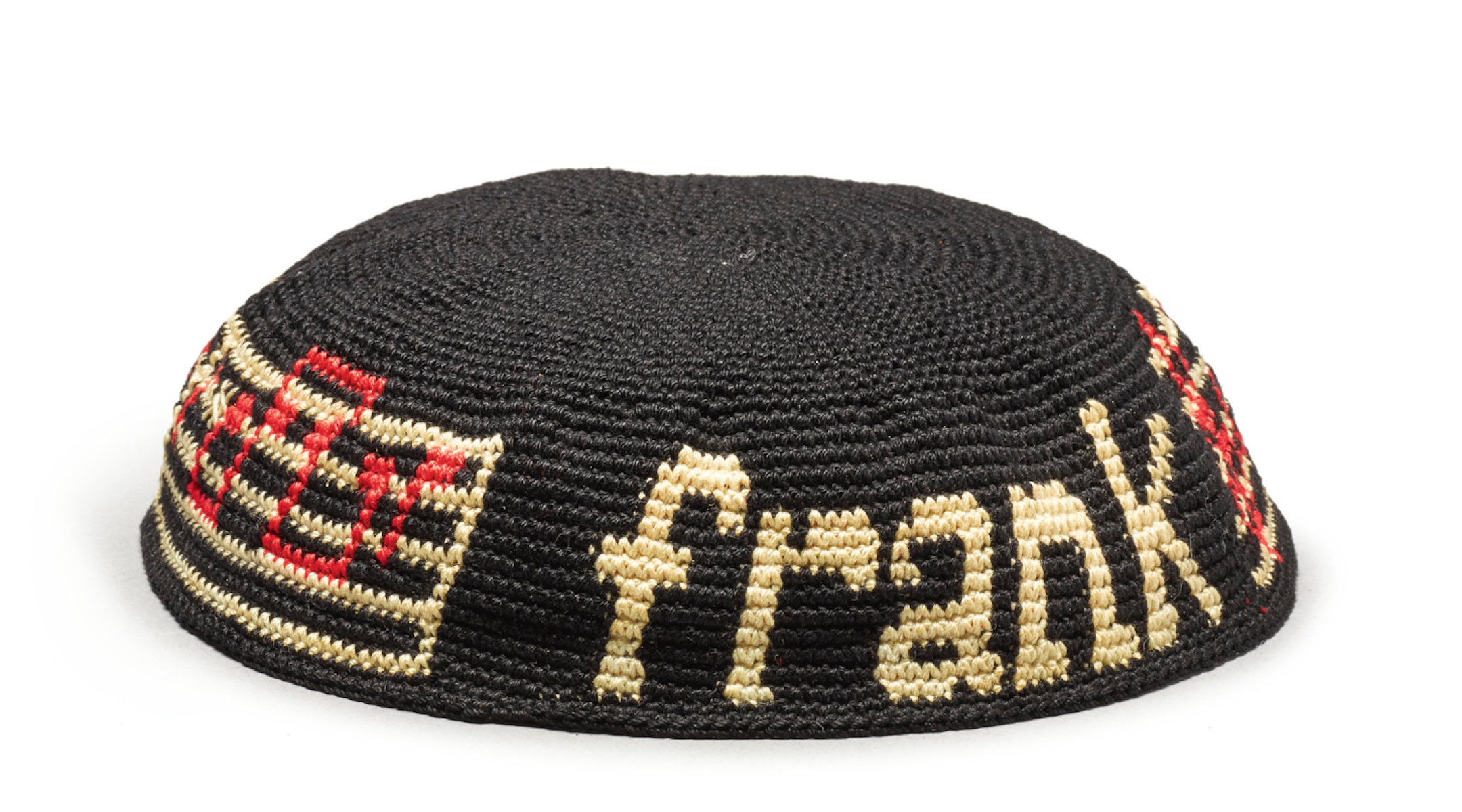 “When I saw the picture, the one that was auctioned, I immediately knew that it was from that time, because my father got one at the same time,” Pauline Schwartz said.

Schwartz’s widow Connie also presented us with a picture of a kippah, which — because Schwartz was a journalist — features typewriters instead of musical notes. Both kippot, however, spell the names entirely with lower-case letters. Rabbi Weiss said he also received a similar kippah.

Who actually made the kippah? That’s a matter of some debate. Rabbi Weiss believes that presenting it was the idea of the late Rubin Wishkin, a past president of the day school, and that it was actually crocheted either by Wishkin’s wife Miriam or by someone the Wishkins retained.

Pauline Schwartz thinks it was one of Weiss’ daughters, or possibly Weiss’ wife.

A group of South Jersey Jews have been discussing their memories of that night on a Facebook thread ever since the news about the auction, and opinions differ on the item’s origins. Several credited one of the rabbi’s daughters, but she said that she doesn’t remember doing so and probably would have been too young to have known how to crochet in 1981.

Skinny D’Amato died in 1984. Frank Sinatra and Sonny Schwartz passed away within a few months of each other in 1998. Teplitzky’s closed in 1987, but the name was revived, briefly, a few years ago for a coffee shop in the also-since-shuttered Chelsea Hotel, which was on Teplitzky’s former spot. The Hebrew Academy of Atlantic County is still operating, although it’s now called Trocki Hebrew Academy and is based in Egg Harbor Township.

The resurfacing of the kippah has been exciting for those who were around that Jewish community back then.

“It’s a snapshot of a time period and a place and it sort of symbolizes almost a magical type of thing that took place, when all these celebrities came there, and it was all to honor this Jewish day school in Margate.”