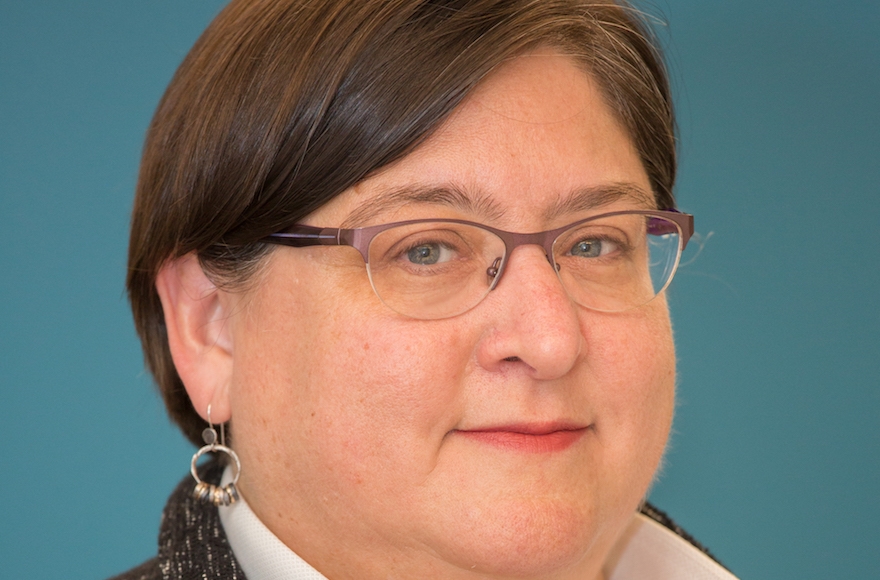 Rabbi Hara Person says “it’s hugely historic, and also it’s time” for a woman to be heading the Central Conference of American Rabbis. (Courtesy of CCAR)

The Central Conference of American Rabbis, which represents 2,100 Reform rabbis around the world, made the announcement on Thursday. Person succeeds Rabbi Steven Fox, who is retiring in June after 13 years as CEO.

With more than 1 million members, the Reform movement is the largest Jewish denomination in North America.

Person, 54, has been working at the New York-based rabbinical body for a decade, first as head of its publishing arm and since last year as its chief strategy officer. She also serves as the High Holidays rabbi at Congregation B’nai Olam in Fire Island Pines, New York, and as the adjunct rabbi at Brooklyn Heights Synagogue. Previously she worked at the Union for Reform Judaism Press as its editor in chief.

She said being the first woman in the position “feels really exciting.”

“On the one hand, it’s hugely historic, and also it’s time,” Person told JTA in a phone interview. “It’s sort of shocking that it hasn’t happened before, and I hope that it will be a positive modeling, not only for our female colleagues, but also for our male colleagues to see a different kind of leader.”

Rabbi Julie Schonfeld became the first woman to serve as chief executive of a major rabbinical organization when she was tapped to lead the Conservative movement’s Rabbinical Assembly in 2009. Schonfeld announced earlier this year that she would be stepping down in June 2019.

Person says one area she wants to focus on in her new role is embracing the rabbinate’s diversity, both in terms of gender — women make up one-third of CCAR membership — and career trajectories.

For the past year, Person has been leading the organization’s task force on the experience of women in the rabbinate, which looks at issues such as sexual harassment, pay equity and career advancement. She says she will continue to focus on challenges faced by female clergy in her new role.

Person also wants to provide support for the approximately 25-35 percent of Reform rabbis who do not work as congregational clergy. She remembers being discouraged from taking an organizational job after being ordained in 1998 from the Hebrew Union College-Jewish Institute of Religion.

“There’s a huge array of different kinds of ways that rabbis are really serving the Jewish community. It’s just so much broader than ever before,” Person said.

Person also will be encouraging conversations and fostering relationships among rabbis throughout the country.

“Often rabbis are isolated,” she said. “They are in communities where there aren’t a lot of rabbis, there isn’t a support structure of people who really understand what it is to be a rabbi, so how do we enable rabbis to be there for each other, to be each other’s rabbis?”

She hopes that building closer ties among rabbis can also serve as a model for how they can encourage conversations in their communities, including in situations where people may have opposing political or other views.

“The outside challenges I think are pretty clear in terms of growing anti-Semitism and white supremacy,” she said. “And we have challenges from inside, which are about how we help people to connect in meaningful ways, how do we make Judaism relevant.”

The rabbi says she is prepared — albeit a bit intimidated — to take on her new role.

“There are big shoes to fill and there’s quite a proud history here that I’ll be stepping into,” she said. “So it feels a little bit scary, but also really, really exciting, and I feel really ready.”