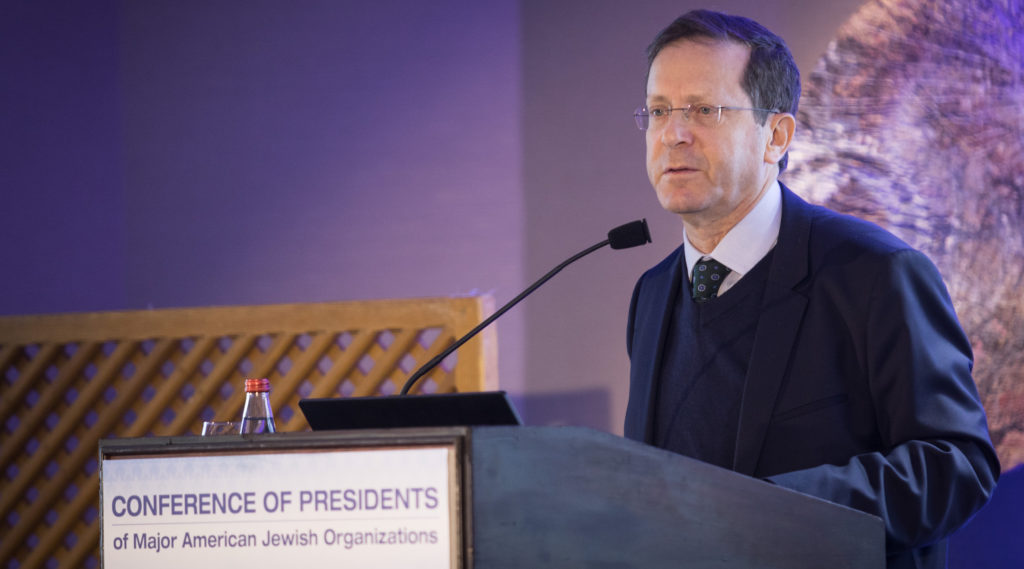 NEW YORK (JTA) — When he ran against Benjamin Netanyahu for Israeli prime minister in 2015, Isaac Herzog tried to win with moderation and a soft-spoken campaign. He lost the election.

Now he is the chairman of the Jewish Agency for Israel, which is tasked with connecting Israel and the Jewish Diaspora. And he thinks the strategy that failed him in 2015 can unite the Jewish people today.

American Jews, who are largely liberal, have different sensibilities from Netanyahu’s right-wing government and its bear hug of President Donald Trump. But even though he says Israelis and American Jews won’t see eye to eye on everything, Herzog hopes to bridge that gap through quiet discussions with right-wing Israeli lawmakers and by appealing to a Jewish “silent majority” he thinks is out there.

“On the other hand, I think there is a silent majority, as you say, within the family that wants the bonding, and we have to strengthen that bonding.”

When Herzog took the Jewish Agency post in 2018, American Jewry and Israel were drifting further apart. Trump’s pro-Israel policies notwithstanding, only a minority of American Jews embraced him. Movements of millennial left-wing Jews, like IfNotNow and Jewish Voice for Peace, were taking to the streets to protest Israel’s control of the Palestinians. A poll found that a majority of American Jews both support Israel and disapprove of its government’s policies.

American Jewish organizations, meanwhile, felt betrayed by the freezing of an agreement that would have provided more space to non-Orthodox Jews at the Western Wall. In 2017, Israeli Deputy Foreign Minister Tzipi Hotovely said U.S. Jews are “people that never send their children to fight for their country” and that “most of them are having quite convenient lives.” This week, Israeli Education Minister Rafi Peretz reportedly called intermarriage in America a “second Holocaust.”

The quasi-governmental Jewish Agency is usually described as the functional bridge between Israel and the Diaspora, getting a significant portion of its funding from Jewish federations and communal funds. It has traditionally been tasked with facilitating aliyah, or Jewish immigration to Israel. In addition, it helps fund long-term programs to bring Diaspora Jews to intern or study in Israel, and sends a network of Israeli emissaries to countries abroad. Within Israel, it operates programs that aid disadvantaged populations.

Herzog sees education as the key to getting Israeli and American Jews to understand each other beyond international news reports. He wants to bring more American Jews to travel, intern and study in Israel. And he wants Israeli schoolchildren to learn about Diaspora Jewry in class. He also mentioned a “reverse Birthright” that would bring Israeli Jews to experience the American Jewish community firsthand.

He noted that in Israel, even right-wingers support causes that are considered liberal in America, like universal health care or reproductive rights.

“If people drill down into the very heated political debate in Israel now, they will find out that there is a huge group in Israeli society out there that is aligned with their views,” he said. “Because of the perception as if the [Israeli] right is fully aligned with the Republicans or with the president, etc., etc., people don’t understand that there’s a variety of views in Israel.”

But what about when Israel’s prime minister condones the extreme right, as Netanyahu appeared to do in the run-up to April’s election? Or when Netanyahu endorses Orthodox control of marriage, divorce and holy sites to soothe his coalition partners? Will dialogue and education be able to explain to alienated American Jews what Netanyahu sees as political realities?

“I can’t prevent it all, I can’t,” Herzog said. “There are extremists, for example, in Israel, zealots that do not symbolize the rank and file of Israeli society, and there are other voices on the extreme left, for example, in the United States.

Herzog also places some of the responsibility for the divide on Diaspora Jews. He says Jews outside of Israel should be grateful that the state exists, enabling them to feel proud to be Jewish in their own countries.

“The story of Israel is what enabled them to flourish in recent generations because of the fact that Israel was all of a sudden a major source of pride for them and a beacon unto the world,” he said. “You are benefiting enormously from the fact that there is a Jewish state out there.”

Before 2015, Herzog had a successful political career, rising through the ranks of the Labor Party. He was Prime Minister Ehud Barak’s government secretary in 1999, and served 15 years in the Knesset, including as a government minister. He says one of his talents is being able to work a room of politicians with contradicting views.

Herzog tried to apply that talent to the 2015 campaign, but says he should have gone against his instincts and been more aggressive. He also wishes he had tried to find more allies on the right. He said his preference in Israel is for unity governments between the left and right.

“There are many times I think, perhaps, I should have been more aggressive,” he said. “Since I believe elections are won from the center, we tried to be as centrist as possible while advocating peace.”

Much has changed since Netanyahu’s victory over Herzog. The prime minister has moved further right, now supporting Israeli annexation of West Bank settlements. He is facing indictment on bribery and breach of trust allegations. And he has adopted elements of Trump’s rhetoric — attacking the media, those investigating him and the courts.

Netanyahu essentially tied with his current rivals — the centrist Blue and White party — in the April election, and will face off with them again in September after failing to form a governing coalition. But amid all of the vitriol and turmoil, Herzog isn’t too worried about Israeli democracy. He hopes, as always, that cooler heads will prevail.