The latest poll on anti-Semitism in Europe looks bad. Trust me: It’s true.

AMSTERDAM (JTA) — The last time that a stranger directed an anti-Semitic insult at me, I was carrying supplies for my son’s birthday party.

It was on a Sunday afternoon on Dam Square. Carrying Star of David party decorations in a see-through bag, I paused to snap some pictures on my cellphone of an anti-Israel rally.

I was busy sending them to a friend who had inquired about such events in the Netherlands when a bearded man sporting a Moroccan accent said loudly in my direction: “Cancer Jew. You’re all made up, you’re fake. You’re fake dogs.”

The incident was far from extraordinary — I have experienced much worse abuse during my years of covering European Jewry and its problems — but I found myself recalling it Monday following the publication of the unsurprisingly grim results from Europe’s largest survey of Jews on anti-Semitism.

About a third of the 16,395 Jews polled this year in 12 countries by the European Union Agency for Fundamental Rights said they avoid Jewish events or places out of fear for their safety. A similar number said they have considered emigrating in the past five years because they did not feel safe as Jews.

More than 80 percent of respondents said anti-Semitism was “the most pressing problem” facing them. Nearly 40 percent said they had experienced an anti-Semitic incident over the past five years, and of those, 79 percent said they didn’t report it because they thought doing so would be a waste of time.

Vera Jourova, the EU commissioner for justice, consumers and gender equality, called some of the poll’s data “shocking” in an address she delivered Monday in Brussels during the presentation of the report.

She vowed tougher action on anti-Semitic crimes, especially online, and called on all EU member states to adopt the International Holocaust Remembrance Alliance definition of anti-Semitism, which includes some forms of anti-Israel rhetoric, because “you cannot fight it if you can’t define it,” she said.

The respondents appeared more affiliated than the average European Jew, with 45 percent saying they eat kosher at home and 84 percent declaring they fast on Yom Kippur. A sample with more respondents for whom Judaism is a less central element of life may yield different results.

But even for a secular Jew like me, the report was no more shocking than the presence of the armed special forces officers at our children’s Jewish kindergarten, where they block off the entire road twice a day, during pickup and drop-off hours.

My reporting has made me so used to such sights – the result of several terrorist attacks by Islamists on Jewish institutions, including the 2012 bloodbath at a Toulouse school — that I was genuinely surprised by how disturbing this is to my wife, who is Jewish but rarely attends Jewish community events.

Certainly the head of the European Jewish Association wasn’t surprised by the EU report.

Anyone who is shocked, Rabbi Menachem Margolin said in a statement, is ”disconnected from the reality on the ground.”

Like so many of the poll’s respondents, I also brushed off the anti-Semitic incident I had experienced without reporting it to police.

After all, I do not believe Dutch police would have identified the man who accosted me. But if they did, he could have accused me of assaulting him and back his claim with false witnesses from his rally — who would land me in trouble.

The refusal by Dutch police to even investigate a Jewish community leader’s complaint for assault did little to assure me that they have my back.

The Dutch government’s resistance to adopting an internationally accepted definition of anti-Semitism was also of little assurance. Nor was a Dutch court’s failure in July to charge a Syrian man with a hate crime for smashing up a kosher restaurant while waving a Palestinian flag. 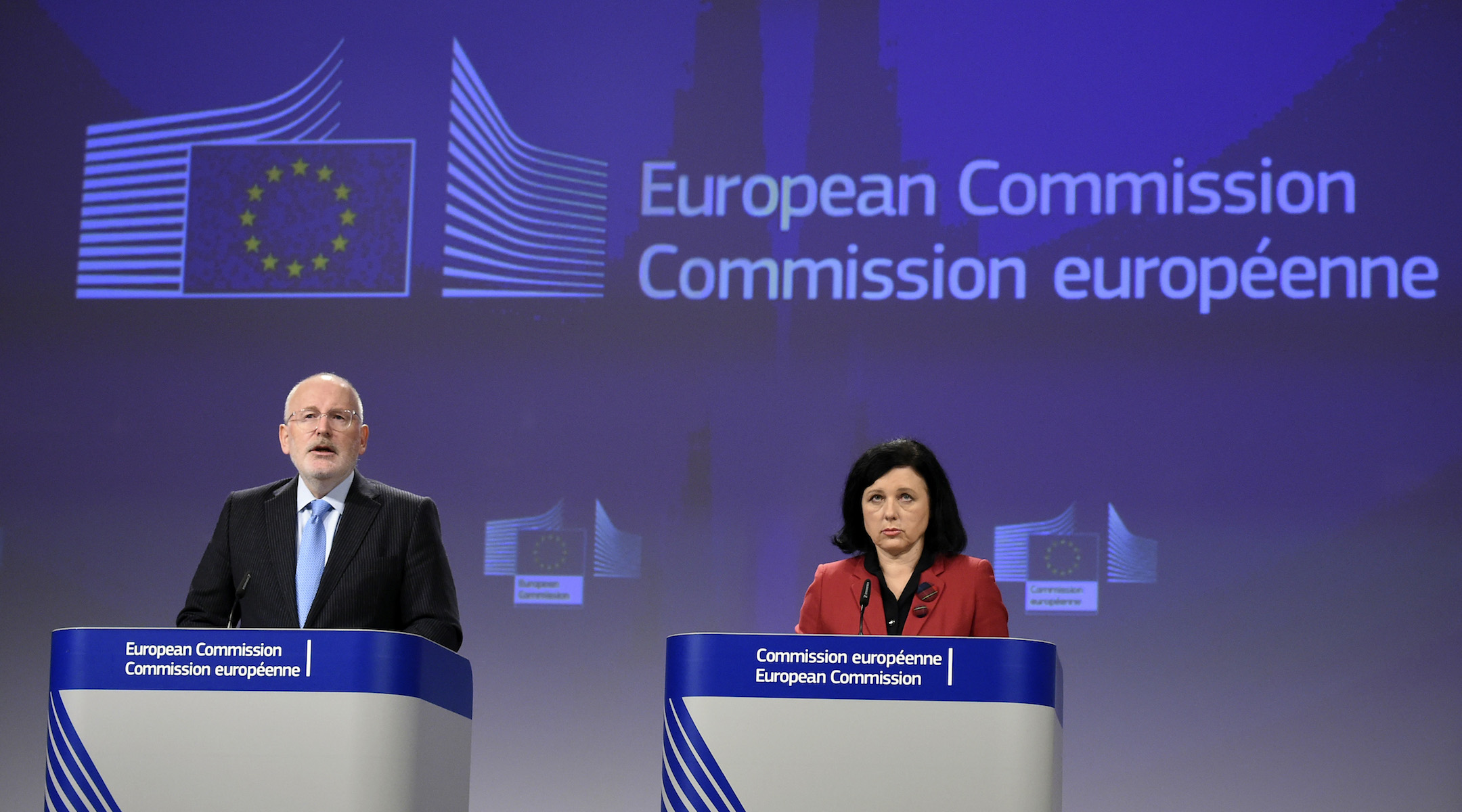 European Union officials Frans Timmermans, left, and Vera Jourova at a news conference on the EU’s response to a new survey about anti-Semitism at the body’s headquarters in Brussels, Dec. 10, 2018. (John Thys/AFP/Getty Images)

These problems are not exclusive to the Netherlands.

In France, where half a million Jews live and the volume of anti-Semitic incidents increased by 69 percent in 2018, such occurrences have become a “daily occurrence,” Prime Minister Edouard Philippe said last month.

In the United Kingdom, the country’s former chief rabbi, Jonathan Sacks, said that many people in his community feel they are facing ”an existential threat” in the supporters of Labour Party leader Jeremy Corbyn. Sacks, one of contemporary Judaism’s most eminent representatives, called the far-left politician an anti-Semite. Corbyn, who has called Hamas and Hezbollah his “friends” and who had suggested that British “Zionists” are incapable of irony, has rejected the allegation vociferously.

In Sweden, anti-Semitic harassment by far-right activists led for the first time since World War II to the shuttering of a Jewish community anywhere in the European Union out of security concerns. The dissolution of Umea’s Jewish community was a sad precedent in a country where Jews are regularly assaulted by Muslim extremists, often with Israel as a pretext.

Still, the news out of Brussels isn’t all bad when it comes to the fight against anti-Semitism.

And whereas some European governments 20 years ago took pains to deny the resurgence of anti-Semitism after the Holocaust and the reasons driving it forward, mainstream politicians in Europe today seem to be more conscious of the problem’s nature and more interested in confronting it.

Significantly, Jourova mentioned in her address not only anti-Semitism, but also anti-Zionism – a reference that many believe would have been unthinkable only several years ago coming from a high-ranking EU official. She also mentioned “Islamist anti-Semitism.”

Such rhetoric reflects a reluctant acceptance in Europe of the effect of the arrival to the continent of millions of immigrants from anti-Semitic societies in the Muslim world. Whereas many integrated seamlessly into European societies and adopted their values, others have rejected them and reintroduced into the mainstream anti-Semitic sentiments that have been suppressed in Europe as part of the lessons of the Holocaust.

Labeled “new anti-Semitism,” this mutation of Jew hatred has baffled European progressives, who struggled to come to terms with the systemic targeting of one minority group by members of another.

Watchdog groups say that the vast majority of violent attacks on Jews in Western Europe today come from people with Muslim background. But accepting or admitting this has proven difficult for some advocates of Europe’s immigration policies.

Yet last year, French President Emmanuel Macron vowed that France will “not surrender to anti-Zionism because it is a reinvention of anti-Semitism.” It was the first time that a French president made such an equation.

Following France’s lead, Belgium, Germany, the Netherlands and several other countries mounted formidable efforts to protect Jewish community institutions, in some cases leading to a reduction in incidents.

Yet even under Macron, French authorities, who in the early 2000s downplayed the scale of anti-Semitic crimes, showed signs of relapsing. Last year, France’s National Consultative Commission on Human Rights asserted that it “had no evidence” to support what it called “the new anti-Semitism hypothesis.”

In May, a study published by a German federal entity said that anti-Semitism in Europe is unaffected by recent Muslim immigration, prompting a prominent critic to call the report selective and flawed.

As the debate rages on, many Jews like me are increasingly contemplating their futures in Europe – despite major steps designed to ensure our ability to live freely and safely here.

Because amid polls, reports, discussions and declarations about the need to balance freedoms, for too many European Jews “freedom of belief and the freedom to live without fear remain distant aspirations,” as Michael O’Flaherty, the director of the EU Agency for Fundamental Rights, put it Monday during his address in Brussels.