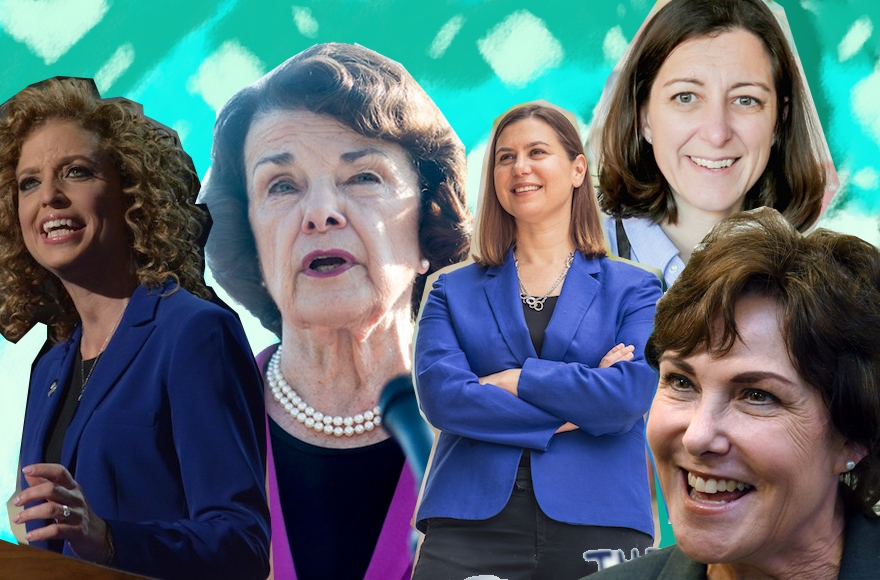 (JTA) — Tuesday night’s midterm elections were hailed as a victory for gender parity, as an unprecedented number of women won bids to serve in Congress. More than 100 women were elected to serve in the House of Representatives and the Senate, according to final vote tallies and projections.

It’s a group that includes 11 Jewish women — nine in the House and two in the Senate races. The winners are all Democrats — several female Jewish Republicans were unsuccessful in their bids for office.

Here’s a rundown of the winners:

Rosen, 61, a one-term congresswoman from Nevada, will move to the Senate after defeating Republican incumbent Dean Heller in a toss-up race. She launched her political career in 2016 with a victory in her state’s 3rd Congressional District. Her prior political experience was minimal — if you don’t count being president of a synagogue, Congregation Ner Tamid in suburban Henderson. Rosen previously worked as a consultant and software designer. Her Senate campaign centered on education and the environment, as well as opposing President Donald Trump’s immigration crackdown. Democrats tried hard to flip the state — both former President Barack Obama and Vice President Joe Biden campaigned on Rosen’s behalf.

Slotkin’s background is in defense and intelligence. Slotkin, who beat Republican incumbent Mike Bishop in Michigan’s 8th Congressional District, is a former CIA analyst and served in various defense capacities in the Bush and Obama administrations, including as acting assistant secretary of defense for international security affairs. Slotkin, 42, lives on her family farm in rural Michigan. She is passionate about health care and says she was motivated to run for office by seeing the high costs her mother faced as she battled and ultimately succumbed to ovarian cancer.

Wild, 60, left a career in law to enter politics. She defeated Republican Marty Nothstein in Pennsylvania’s 7th Congressional District to replace another Republican, Pat Meehan, who resigned amid a sexual harassment scandal. This was her first political campaign, and she ran on a platform that includes improving health care and protecting organized labor. Wild’s involvement with Jewish life includes serving on the board of directors for her local Jewish federation.

Luria overcame challenging odds to edge Republican incumbent Scott Taylor in Virginia’s 2nd Congressional District. Luria, 43, is a former U.S. Navy commander who finds ways to connect to the ocean in quite a different way — by owning and running a mermaid-theme shop. Her campaign platform included protecting Medicare and Social Security, increasing funding to the Department of Veterans Affairs and combating sea level rise and flooding.

Schrier is a physician who made her campaign in Washington state’s 8th Congressional District primarily about health care reform. She has said that as a Jew she was motivated to enter politics following last year’s neo-Nazi and white supremacist rally in Charlottesville, Virginia. Schrier was one of several Jewish candidates targeted with Republican ads that showed her clutching cash — many saw the ads as playing on anti-Semitic tropes. In the end, she beat Republican Dino Rossi to replace retiring incumbent Dave Reichert.

At 85, Feinstein is the oldest sitting U.S. senator and the longest-serving woman. The California lawmaker is also the top Democrat on the Senate’s Judiciary Committee and is a leading progressive on many issues. She led the Democratic effort to dig into the record of Brett Kavanaugh after he was nominated to serve on the Supreme Court. Feinstein started her political career in San Francisco, becoming president of the city’s Board of Supervisors in 1969. In 1978, she became the city’s mayor following the assassination of George Moscone (Jewish gay rights activist Harvey Milk, San Francisco’s city supervisor, was killed by the same gunman). Her parents are both of Jewish ancestry, but her mother was raised Christian; Feinstein chose Judaism as her faith at age 20. On Tuesday, she beat fellow Democrat Kevin de Leon (California’s election system allows the top two candidates to run against each other, regardless of party), with 54.3 percent of the vote.

Davis, 74, won re-election with her victory over Republican Mortan Murtaugh. She has been serving California’s 53rd Congressional District since 2001 and is the top Democrat on the higher education subcommittee. She is passionate about the topic of education, having served as president of the San Diego school board early in her political career. Another of her core issues is health care access, and she has introduced legislation to allow women to visit their ob/gyns without a primary doctor referral. Her grandparents were Jewish immigrants from Russia. After college, Davis lived on an Israeli kibbutz and worked with at-risk youth.

Wasserman Schultz, 52, will continue to represent South Florida’s 23rd Congressional District. Wasserman Schultz, a member of the House since 2005, has experienced a rough two years. Once a rising Democratic star, she served as chairwoman of the Democratic National Committee, but resigned after a hack found that she and others had favored 2016 presidential candidate Hillary Clinton over rival Bernie Sanders, a Vermont Independent who caucuses with Democrats. But she’s still doing fine in her district, receiving 58.4 percent of the vote and beating her Republican opponent Joe Kaufman by 22 percent. Wasserman Schultz became involved in politics through the now-defunct National Jewish Democratic Council. She also was one of the driving forces behind establishing Jewish American Heritage Month, introducing the legislation in 2005 with the late Arlen Specter.

Schakowsky easily retained her seat in Illinois against Republican John Ellison, receiving 73 percent of the vote in the state’s 9th Congressional District. Schakowsky, 74, has been representing the district since 1999 and is among the most progressive members of Congress. A major advocate for women’s rights, she has fought for issues such as combating sex trafficking, reducing maternal death and fighting health care costs that put a higher burden on women. Schakowsky is close to the liberal Middle East advocacy group J Street and in 2015 wrote in the Huffington Post about her decision to boycott a speech by Israeli Prime Minister Benjamin Netanyahu in front of Congress.

Lowey, 81, will continue to represent New York’s 17th Congressional District. A House member since 1989, she is the ranking Democrat on the Appropriations Committee and on its foreign operations subcommittee. Though Lowey was a top contender to take Hillary Clinton’s Senate seat after the former first lady was nominated to be secretary of state, Lowey said she did not want to give up her role on the Appropriations Committee. She is a strong supporter of Israel and was one of fewer than 20 House Democrats who voted against the Iran nuclear deal in 2015.

Among the lawmakers on this list, Bonamici’s entry into politics is relatively recent. First elected to Congress in 2012, she represents Oregon’s 1st Congressional District. She is passionate about education and the environment, and is the ranking member on the Committee on Science, Space and Technology’s environment subcommittee. Bonamici, 63, was raised Episcopalian and Unitarian, but now practices Judaism with her Jewish husband, Michael Simon, a federal judge.