(JTA) — Lee Eisenberg and Gene Stupnitsky have careers that many people in Hollywood dream of.

Not long after graduating from college and moving to Los Angeles, the duo joined the writing staff of “The Office” on the strength of a TV script they wrote together. After contributing to the show for several seasons, they co-created the HBO comedy series “Hello Ladies” with Stephen Merchant (the co-creator of the original British “The Office”).

The pair also worked with Harold Ramis on the prehistoric comedy “Year One” and wrote the movie “Bad Teacher,” which starred Cameron Diaz and Justin Timberlake.

Despite all of that, they’ve mostly flown under the mainstream radar. That might change after Friday, when their latest brainchild, “Good Boys,” hits theaters. It’s a raunchy R-rated comedy about three rising sixth-graders who find themselves embroiled in shenanigans over the course of a day on the way to a “kissing party,” where one of their crushes will be hanging out.

If it sounds reminiscent of “Superbad,” there’s one possible reason: “Good Boys” is produced by none other than Seth Rogen and Evan Goldberg, the Jewish duo who wrote the 2007 coming-of-age comedy. Eisenberg and Stupnitsky wrote the screenplay for “Good Boys,” and Stupnitsky directed.

The movie has already received pretty positive reviews, which say that the script has heart, in addition to the usual slew of curse words and sex jokes. Ads for the film harp on the fact that its own stars are too young for the mature comedy in it. In the trailer, Rogen spells this out for the three lead actors.

“That is f***ed up!” Rogen responds. “You can say that. But you can’t watch yourself say that.”

In Variety, Dave McNary wonders if “Good Boys” could be the hit that rejuvenates the comedy blockbuster, which has declined, saleswise, since the release of “Superbad” 12 years ago this summer.

But Eisenberg and Stupnitsky said while they are fans of Rogen and Goldberg, they didn’t specifically have “Superbad” on their minds while writing “Good Boys.”

“We were thinking about ‘South Park’ and ‘The Hangover,’ but with kids. A lot of movies, but with kids,” Stupnitsky said.

Eisenberg added that 1980s kids’ classics like “Stand By Me” and “The Goonies” were inspirations, too.

While some of the funny details in “Good Boys” are based on real episodes from the writers’ lives — like the scene in which the preteens find sex toys in a parent’s bedroom, just as Eisenberg did at a friend’s house in third grade — the pair aimed more broadly to capture the anxieties of growing up.

“Lee and I weren’t drinking beers in sixth grade. That was probably more Seth and Evan,” Stupnitsky quipped. “It’s not so much about what happened as how it felt. Everything is confusing at that age. … It’s a weird time in your life and we were trying to recap that feeling.”

On the phone from Los Angeles, they interrupt each other with a friendly ease they have cultivated over nearly two decades. Stupnitsky, 41, was born in Kiev, Ukraine, but moved with his parents to the Chicago suburbs when he was 9 months old. Eisenberg, also 41, grew up in a suburb near Boston and attended a Solomon Schechter day school from kindergarten through eighth grade. 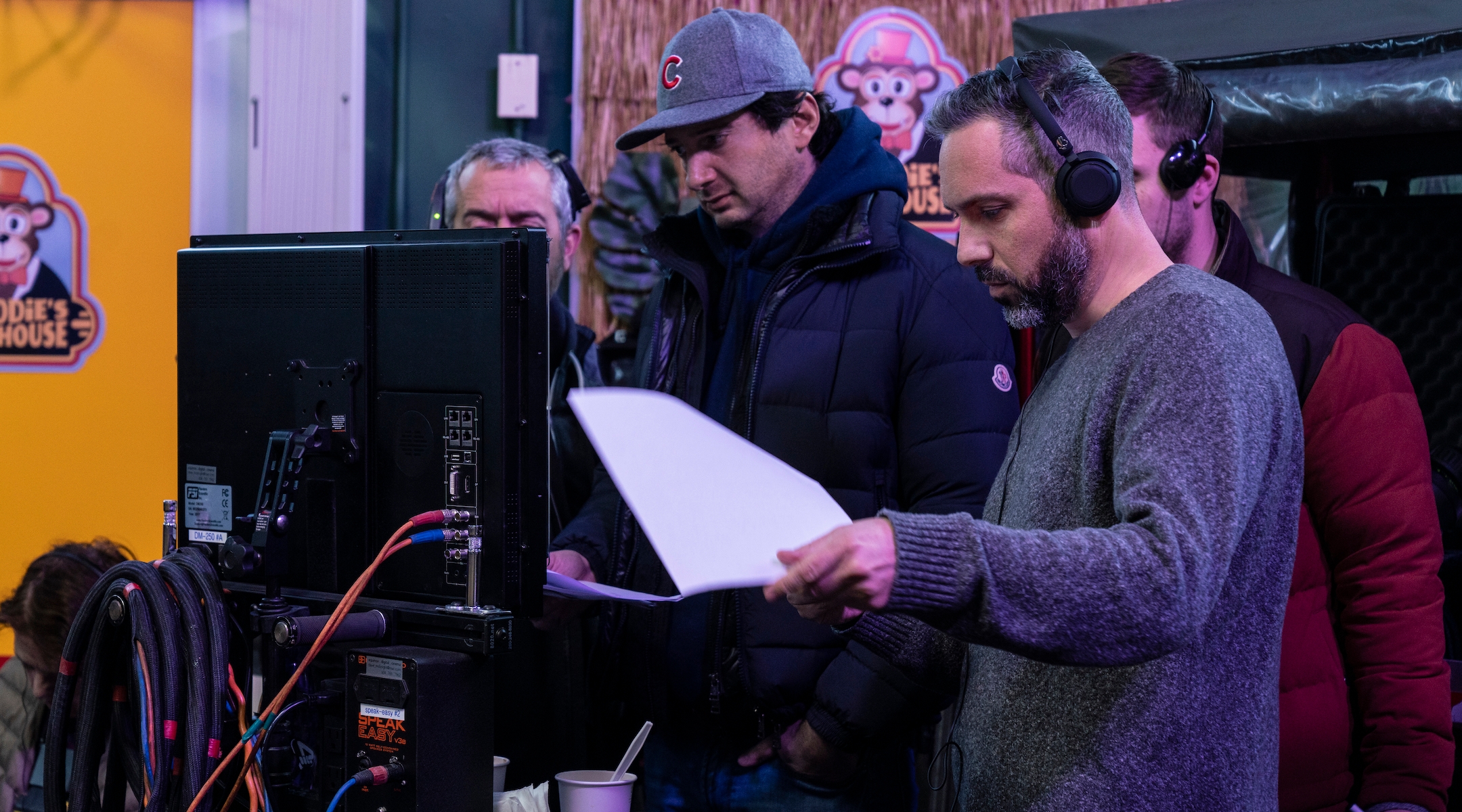 Stupnitsky’s grandparents were observant Jews, his parents less so. Still, he grew up with a sense of Jewish identity and had a bar mitzvah.

“Communism was the religion of the state,” he said of the former Soviet Union.

Eisenberg, on the other hand, remembers sneaking off from his class on a school field trip to eat a non-kosher hot dog, and subsequently worrying that his life might then be over.

“I can’t think of anything more Jewish than that,” he said.

They met in Los Angeles and became each other’s “first and only friend” in the city. After spending some time as roommates in the early 2000s, they wrote a script for a TV pilot. It involved two friends living together, but instead of aiming to make it in Hollywood, the characters strove to become successful magicians.

The show was never produced, but the script helped them land jobs on “The Office.” During their time on the show, they notably co-directed the episode in which lead character Michael Scott founds his own paper company (The Michael Scott Paper Company) and acted in bit roles.

They’ve carried their Jewish comic sensibilities with them ever since.

“I like Chris Hemsworth fine, but when I see Seth Rogen in ‘Knocked Up’ or Harold Ramis in ‘Ghostbusters’ — there was very rarely a guy that looked like George Clooney in the movies we found funny,” Eisenberg said of Jews in comedy. “I think [Jews] have always felt a little bit like outsiders, and that resonates.”

“Jews are probably the funniest people,” Stupnitsky adds. “But I think there’s a reason for it, and it’s kind of a sad reason — if you don’t laugh, you’ll cry.”