Survivor Ed Mosberg, 93, is braving cancer to march at Auschwitz, perhaps for the last time 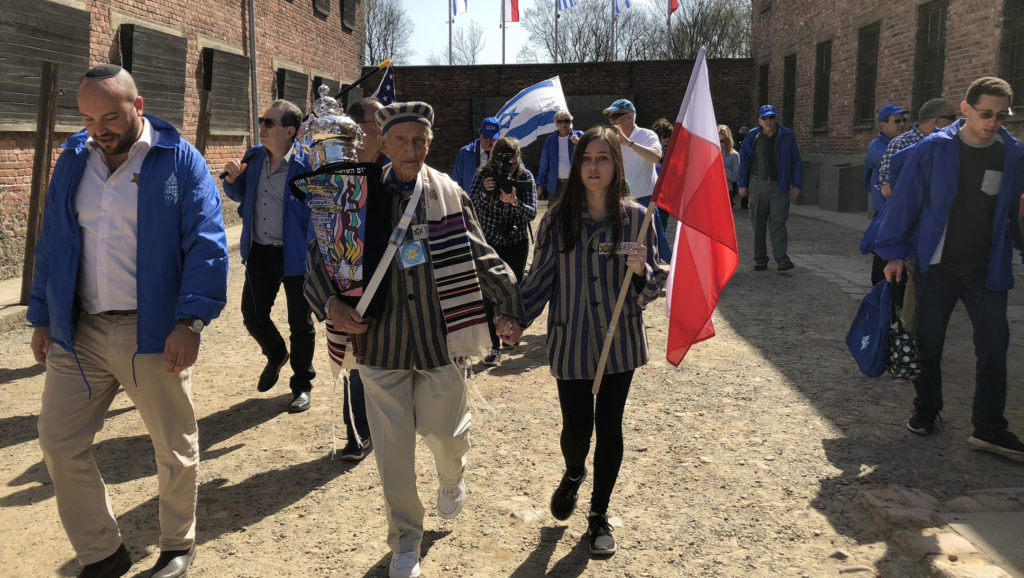 KRAKOW, Poland (JTA) — At the age of 93, Holocaust survivor Ed Mosberg is saying his goodbyes to the city of his birth.

Flanked by two physicians who accompanied him all the way from New Jersey, Mosberg, who made his fortune in construction after surviving several Nazi concentration camps, traveled here Tuesday as he has done for at least 20 years to participate in the commemorative March of the Living through the former Nazi death camp Auschwitz near Krakow.

But suffering from recently diagnosed blood cancer, Mosberg says with characteristic bluntness: “I don’t know if I’ll be alive this time next year, much less able to travel and attend the march.”

He doesn’t fear death for two reasons, Mosberg said in an interview with the Jewish Telegraphic Agency.

“First, I already beat death once after the war when I had final stage tuberculosis – and I can do it again,” he said. “Second, I died already 70 years ago when the Germans murdered my whole family not far from here.”

For Mosberg, attending the march is “not any sign of victory,” he said.

“It’s just duty to name the perpetrators – the German nation. They and they alone bear responsibility, and certainly not the Poles,” he said.

At a time when the Polish government is fighting a controversial battle against what it perceives as attempts to place some blame on Poland for the genocide, Mosberg’s message is music to the ears of officials in Warsaw.

On Tuesday, the Polish government unexpectedly announced that it would award the nation’s highest non-military honor to Mosberg, the honorary president of the From the Depths commemoration group, the following day. Mosberg, who speaks fluent Polish, often stands out in March of the Living coverage as he walks in front wearing his original prisoner uniform.

He also brings to the marches – annual events featuring thousands of participants — a whip that he says was used to torture Jews at Mathausen, one of three Nazi camps Mosberg survived. That artifact, he said, tends to invoke keen interest during security checks at airports.

This year’s march includes Rabbi Israel Meir Lau, another Poland-born survivor, who used to be Israel’s chief Ashkenazi rabbi. Several American diplomats, including the ambassador to Israel, David Friedman, also will attend, along with the head of the Jewish Agency, Isaac Herzog.

But they alone will not determine the future of Holocaust commemoration and the fight against anti-Semitism in a world without survivors, march organizers said.

“That fight belongs to young adults and youth leaders,” said Elie Klein, one spokeswoman for March of the Living.

Which is why this year’s march is the first since the event’s inception in 1988 that is preceded by a conference about anti-Semitism for emerging leadership from around the world. During that event, 20 representatives of prominent youth and young adults groups will issue “a rallying and defiant call to other youth to commemorate the Holocaust and help put an end to anti-Semitism before history repeats itself,” organizers wrote in a statement about the event.

The march takes place on Israel’s national day of mourning for the Holocaust, Yom Hashoah. This year it falls on May 2.

The march itself, a walk of about 1.5 miles from the Auschwitz camp to where the gas chambers used to stand at the Birkenau complex, takes just a couple of hours. In the hours leading up to the event, though, participants from dozens of countries interact across the sprawling former campground in the relative warmth of the southern Polish spring.

For some, it’s a rare chance to speak informally to attending celebrities and politicians before groups are formed for the actual march.

The lessons of the April 27 terrorist shooting attack on a synagogue in Poway, California, where a self-avowed white supremacist killed one person and wounded three others, feature prominently in the talks of some of the participants of this year’s march.

“The awful, senseless murder” is “just the latest in a seemingly endless string of violent anti-Semitic events — one of the most challenging periods in recent memory for the international Jewish community,” said Shmuel Rosenman, founder and co-chairman of the March of the Living.

Another first this year for the march – an event that has had more than 300,000 participants — is the attendance of soccer players from the New England Revolution team from the United States. Players and executives from the Chelsea soccer squad in the United Kingdom, which participated in the 2018 march, said they would be back this year.

This year’s march also will feature a ceremony remembering the tragedy of the Jews of Greece, which by far was the Nazi-occupied country with the highest death rate during the Holocaust. Greece lost more than 95 percent of its prewar Jewish population of 72,000.