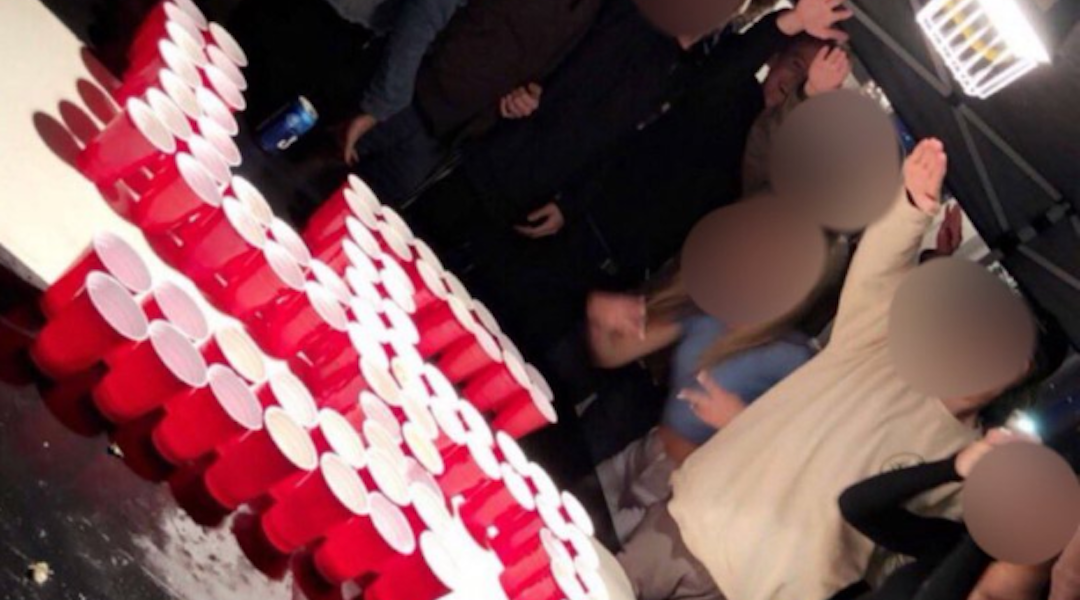 (JTA) — The stepsister of teenage Holocaust diarist Anne Frank will meet with Southern California high school students who were pictured making the “heil Hitler” salute over a swastika made of beer cups.

Eva Schloss will meet Thursday with the students at the Newport Harbor High in a meeting arranged by Rabbi Reuven Mintz, director of the Chabad Center for Jewish Life in Newport Beach.

Students and former students of Newport and other area high schools played the drinking game at a weekend party, and photographs of the swastika made out of red plastic cups, and the students making Nazi salutes, were posted on social media.

“I am hopeful that despite their actions, these young individuals, with promising futures, have the potential to become advocates of tolerance, understanding and coexistence in the school, in our community and beyond,” Mintz said in a statement.

“My goal and hope is to seize this dark moment and use it as opportunity to illuminate Newport Beach as a whole; but specifically, to positively transform the lives of the erring students. We are working closely with the leadership at Newport Harbor High School to facilitate greater awareness, Holocaust education, and encounters with survivors to engage with students on an ongoing basis,” he wrote.

Schloss, an Austrian native, spent two years hiding in Amsterdam before being discovered by the Nazis on her 15th birthday. She spent nine months in Auschwitz. Her mother married Otto Frank in 1953; both had lost their spouses in Nazi death camps. Schloss is an activist and author who speaks widely about her Holocaust experiences.

On Monday, the Newport-Mesa Unified School District held a public forum to discuss the incident, the Los Angeles Times reported. Students at the meeting discussed the social environment that allowed their peers to feel comfortable playing games with Nazi symbolism. Some Jewish students said fellow students had been making jokes and comments about their Judaism since elementary school. One parent released apology letters from some students who were at the party.

Also Monday, students throughout the school district wore blue in a show of support for the Jewish community.

Newport-Mesa Unified School District officials have conducted interviews with more than a dozen students and its investigation of the incident is continuing, according to the Los Angeles Times. The district said it will not disclose any disciplinary actions taken, citing student privacy laws, according to the newspaper.